It’s that time of the year again, the time when Black Friday and Cyber Monday deals are on everyone’s lips. Your mailbox is full with email that have Black Friday discounts, your Twitter & Facebook feeds are also filled and so on. Bombarded by offers. Still, some of the deals are worth it, especially if you planned to purchase something ahead of time.

For Android devs particularily, this is a great opportunity to promote your apps/games by offering them for free or with a discount (even better, if you have Google Play Promo Codes now’s the chance to use them).

For Android users, the good news is that Google has released the annual Google Play Black Friday & Cyber Monday deals. And there’s tons of them, from premium games at low prices, to discounted movies, music and even Google hardware. I counted more than 170 apps and games with discounted prices, over 90 premium movies for under $10 as well as subscriptions for Google Play Music/Videos. You can see a full list of all the offers here (some are country restricted).

Below is a breakdown of the Google Play Black Friday and Cyber Monday 2017 deals, updated as I discover more. Please note that some of these deals are country restricted, but if you add a parameter in the url you can see them all.

19 Premium games for discounts up to 80% 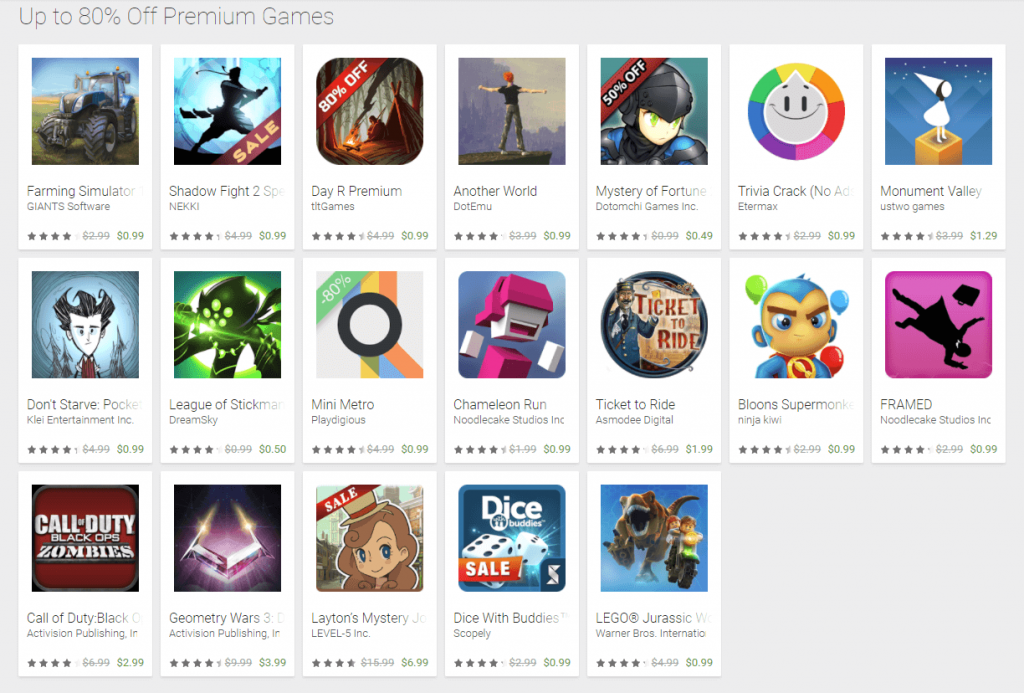 There are also around 172 other apps and games discounted for Cyber Week, you can see all the offers here: Google Play Cyber Week 2017 Games

Several recent movies are now under $10 for Black Friday:

And up to 90 movies in total are now under $10 for Black Friday/Cyber Monday. You can see the full list below (image is big, takes a little):

Unfortunately, Google’s Black Friday hardware deals aren’t too good, especially since Pixel 2 or Pixelbook aren’t discounted. Makes sense from a business point of view not to offer something that’s just released an popular, but still.

Anyway, as far as the Black Friday hardware deals go, here is a list of what Google offers now:

And that’s it on the Google Play Black Friday & Cyber Monday deals for 2017. Unless I’ve missed any, in which case you should add a comment for others to benefit from your tip.