Become an Android Developer with a free Google scholarship

UPDATE: The scholarships were sent out, so if you received one email saying that you got accepted, if not you’ll receive a dreadful email that sounds like this

Due to the high volume and quality of applications we received, and the finite number of spaces available, we are unable to offer you a Google Developer Challenge Scholarship at this time.

This means you’re either too old to be accepted or not that technically-skilled. Bummer, but hey, every kick in the dorsal side is a step further, right?

Smartphones have long now surpassed desktops in terms of web traffic and that’s why more and more companies focus now on mobile apps rather than plain-old desktop software. That’s also due to the fact that Android apps pull in an incredible amount of installs, at the 2016 I/O conference Google announced that for 2015 there were 65 billion installs for Android apps. With Android growing even more rapidly, I’d expect they’d hit close to 100 billion installs at the end of 2017. 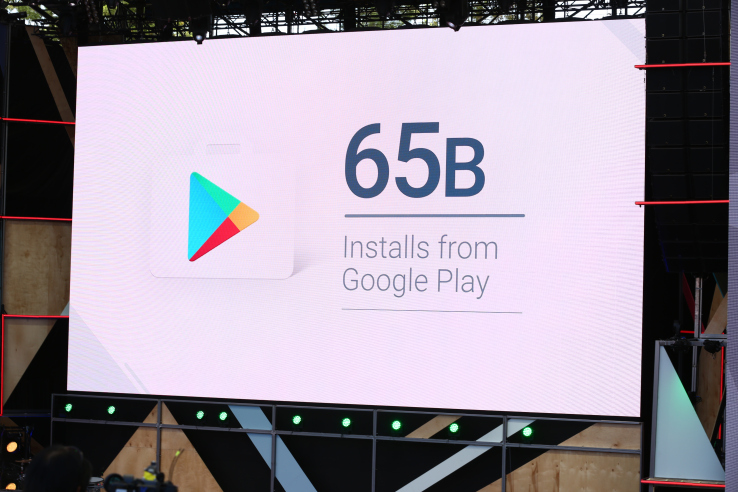 With worldwide population now at 7.5 billion, that means an average of 13 installs for every human on Earth. Not even counting other mobile OS platforms. There’s no stats for desktop software but Google Trends has shown a hemorrhagic downtrend for Windows and Desktops in general. However, if you do a search on Linkedin for jobs, you’ll see that there are more than 90,000 software developer jobs while only 9,000 particular jobs for Android Developers. This means that there is still a lot of room for Android Development jobs to grow, and I believe in the next few years the trend will be different, there will be many more jobs for Android Devs than for the general Software devs.

So it’s time to start learning, and by the principle that it’s never too late if you ever considered becoming an Android Developer now it’s the best time to do so. Google has partnered with Udacity, the leading online learning platform, and they are offering 60,000 scholarships for users that are interested in becoming Android Developers or Web Devs. There are 30,000 seats available for each category, and for Android development these are the 2 types of programs they provide:

You can apply for the scholarship via Udacity’s main site here: Android development scholarships.

There’s a timeline for applying, and all applications are due by October 15, 2017. On October the 30th winners of the scholarships will be announced and class will start on November 6, 2017. 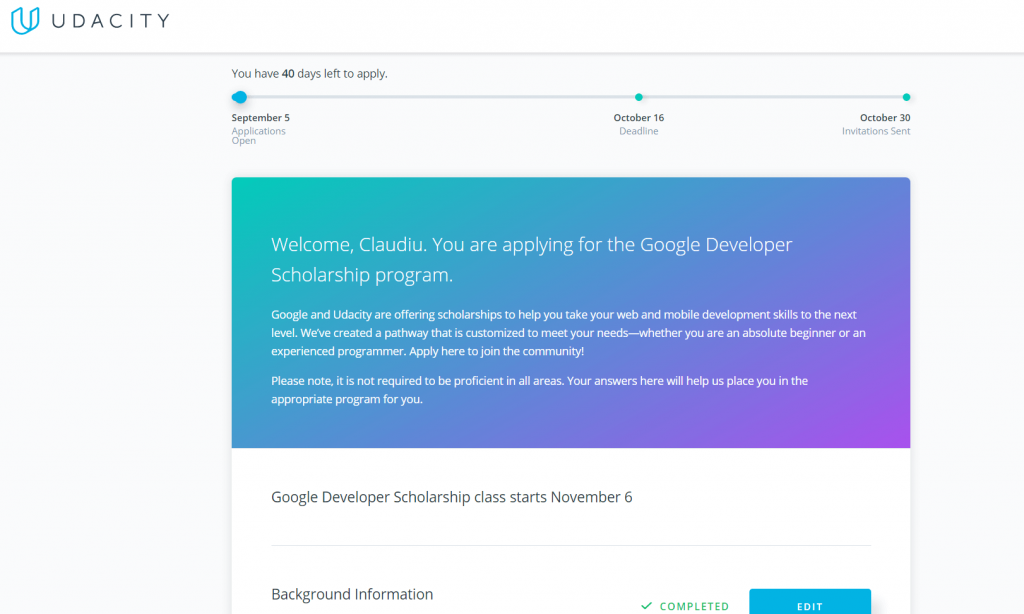 The application is very straightforward and only takes a couple of minutes. It’s basically a guide to helping you choose the program that suits you best, but also a way for them to see if you’re a good fit for this program. Given that there are limited seats, if there will be more than 30,000 applicants for the Android Dev program, then your application will be the differentiator. There are 3 sections to fill in: background information, prerequisite knowledge and your goals. 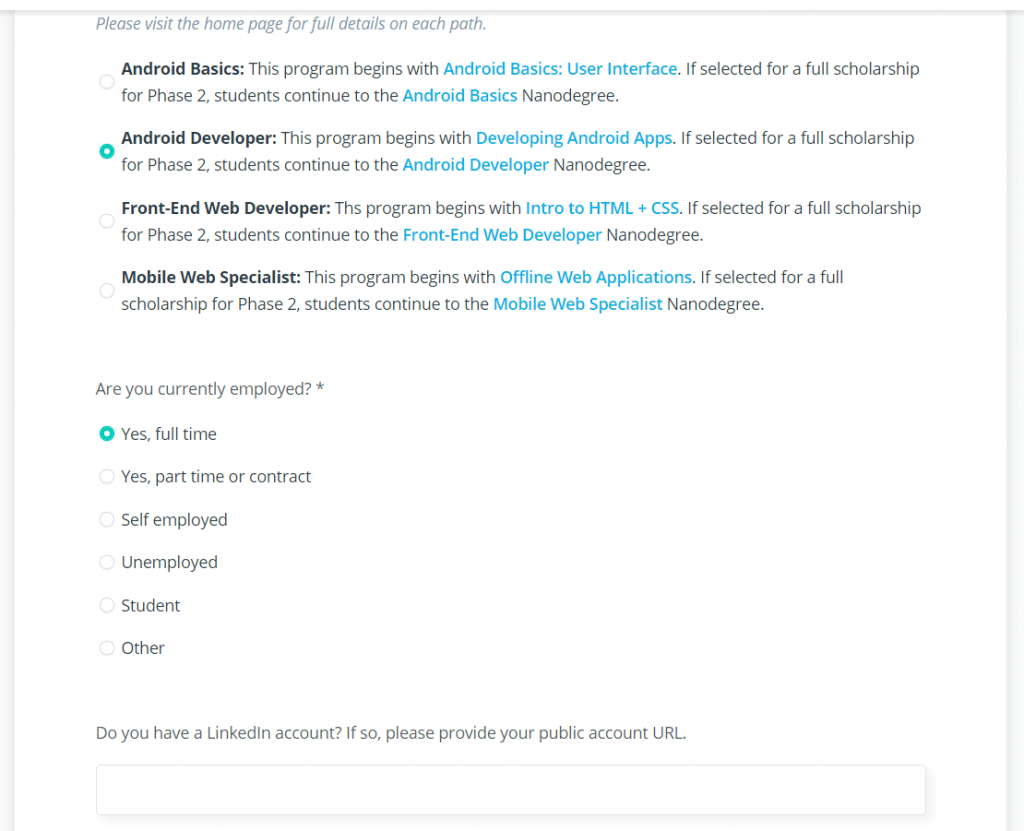 This section, even the past academic experience, does not influence admission decisions. It’s merely for Google/Udacity to track interest and tailor their career programs accordingly. Basically stats for them to use for future classes.

The first thing you’ll need to choose is the program you’re interested in. For Android Development there are 2 programs:

There are also 2 web development programs as well.

You’ll also be asked if you are currently employed, if you have a Linkedin account (to check academic background), how many hours you can dedicate to learning per week and also if you have a reliable Internet connection. And there’s one more question in there which sounds funny to me in the way it was formulated: What gender do you most identify with? See, because of the political correctness current, now they give you other options for gender such as “Non-binary” and “Prefer to self-describe”. They also posted a disclaimer stating that admission decisions are not influenced by gender. Anyway, moving on. 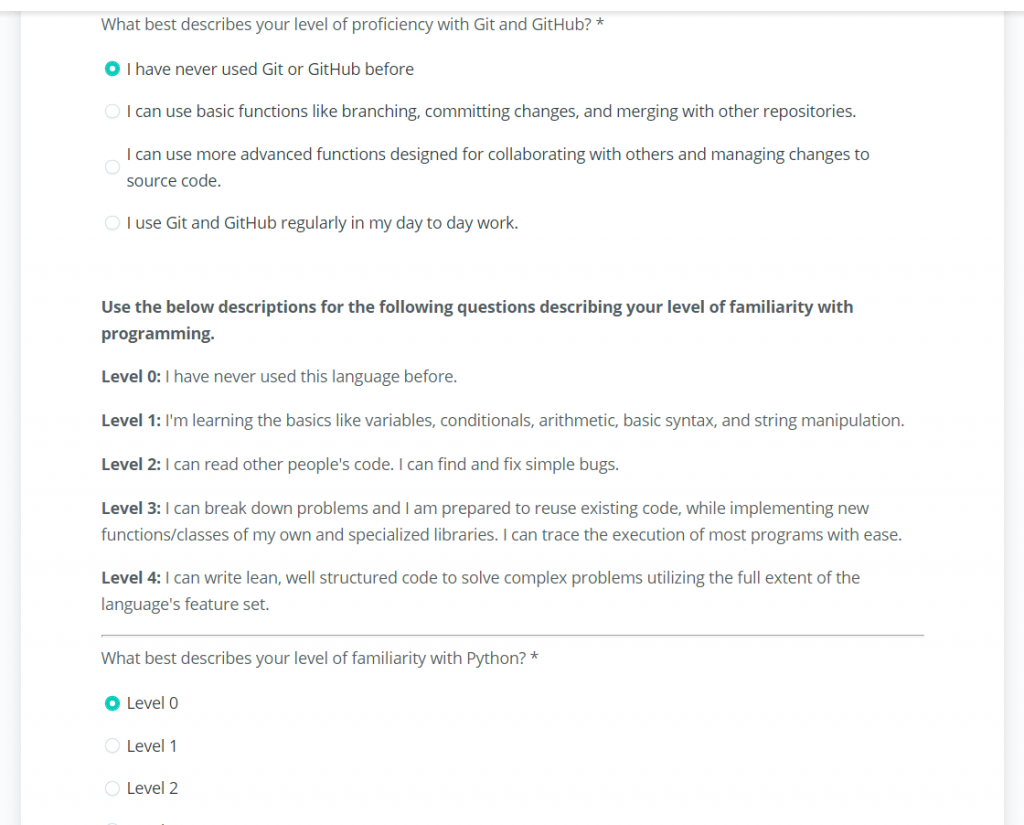 Now this is a more important section, as the background knowledge you provide will help them determine if you have the relevant prerequisites at this time to successfully complete the Nanodegree program. These are the questions asked in this section:

1. Without much preparation, I could do the following on my own (using whatever programming language):

2. What best describes your level of proficiency with Git and GitHub?

3. Then there are 5 questions regarding your level of knowledge for Python, HTML/CSS, JavaScript, Java and Android development, based on the following guide:

4. Do you have any apps published on Google Play?

5. Have you built or designed any publicly available web projects?

For the last 2 questions you’ll be asked to provide an URL. 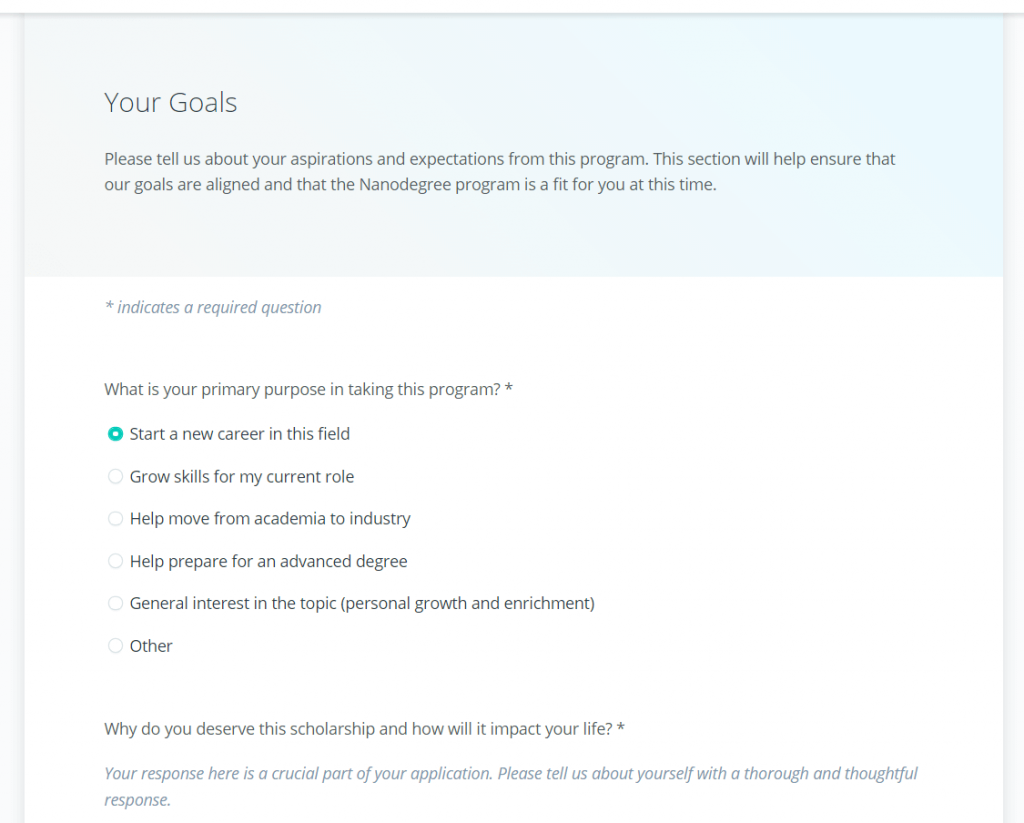 This is the last section of the application, where they ask for your aspirations and expectations from this program. A bit HR-ish, but they state it will help them decide if “our goals are aligned” and if the Nanodegree program is a good fit for you. I’ve never been good at essays so I cannot give you ideas on what to write, but just be honest as that usually saves times.

You’ll only be asked 2 questions, one on what is your primary purpose in taking this program, and the other on why you deserve this scholarship – this is the essay part and they say that your response here is a crucial part of your application and that you should write a “thorough and thoughtful response”.

Last part is just agreeing to some terms and conditions, such as stating you are not a resident of a restricted country (i.e. North Korea), that there is no cash alternative for the scholarship and lastly that your aggregate data might be shared with Google. Also, if you don’t participate within the first 2 weeks of the program you will be dismissed.

Now comes the tricky part, this scholarship is not for US residents! They only allow applicants for residents of one of the 28 EU countries, 4 EFTA countries or Russia, Egypt, Israel and Turkey. Not sure what the reasoning behind this is, but for once I’m happy that my country is accepted.

They mention Nanodegrees above, the idea is that the first part of the program is where all 60,000 participants will learn about development for 3 months, but once that finishes they will pick 6,000 top students for a Nanodegree program where you can learn more advanced development for 6 more months.

So there you have it, if you’ve ever pondered with the idea of becoming an Android Developer but never started it, now’s the perfect time. You can learn this at your own pace, just as long as within those 3 months you finish the class. But if you’re serious about Android Development then you should strive to be accepted for the Nanodegree program, as that’s one step further into becoming a Google Certified developer (a separate, paid exam).

P.S. If you are also looking for books to help you prepare for this class, I cover these in a previous post: 5 Android Development books to help build your first app