Very few foreseen the rise of smartphone apps to the point where the Android world alone has now almost 3 million of them. 3 million choices when deciding to install something on your smartphone, that’s way above the number of desktop apps. This lead to a similar increase in interest for developing apps because there are also BILLIONS of smartphone users (Android devices exceed easily 1+ billion, not taking into account the iOS realm). The craze for app development is due to the lottery-like possibilities. There are a few devs that stroke gold big time even with simple games/apps. The Flappy Bird dude mentioned at one point, before pulling the plug, that it received $50,000 from ads. Daily! That’s a very large amount for a monthly revenue (even yearly), but daily?

These few success stories, coupled with other more realistic ones (where Android devs earn $1,000+ from 1 app) drove up interest from companies and individuals alike to develop apps. Those that already knew programming followed an easy path towards Android app development, but if you don’t have any programming background that’s tougher to do. Not impossible though, just a task for hard-working tech oriented users, as there are still a few ways to develop Android apps:

A wise man said that “It all started with the Big Bang”. You can immerse yourself in the Android development world either by reading books, following online tutorials, watching video tutorials, taking online courses (i.e. Coursera, edX or interactive learning sites such as Codecademy) or doing all these at once. It just depends on how much time you have and how determined you are. I believe that the first thing you can and should do is to start with a book or two. And that’s the first thing I’d focus on, finding the right combination of books to help you get started.

Amazon lists at least 1,600+ books for Android development alone, not to mention other Java-related books. My strong suggestion is not to go ahead and get 10-20 books and start reading them, but instead to focus on a few (i.e. less than 5) and not ordering more than 2 at once. Just start reading 1-2 books on Android development and see first what’s it about and if indeed it is something you can and would like to continue with. This way you invest very little to see if you’re fit for the task. Each book will also include some exercises and samples, so you would also practice while reading. When you finish those books you can advance to others, but the idea is to start low.

1. Beginning Programming with Java for Dummies, 4th edition. As stated above Java is the basis of Android development thus no matter how you look at things you must start with Java. This isn’t the most straightforward programming language (duh, Oracle is behind it) as it relies heavily on object-oriented programming, but if you get to master it at least a bit, you’d be able to write native apps. Also, the power of Java which lead to its popularity is platform-independence. Yes, if you write an app in Java you’ll be able to port that to iOS, Android, Windows mobile. 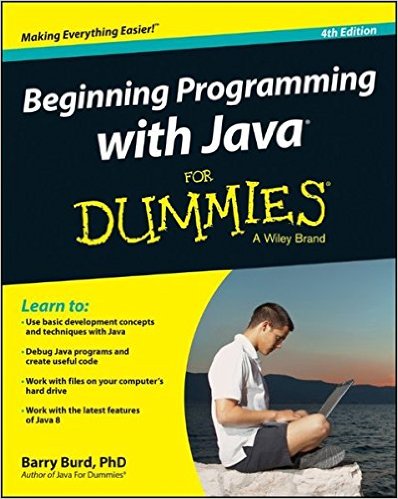 Beginning Programming with Java For Dummies is its actual name and here’s why I believe it should be your 1st choice when starting with Android development:

Again, if you do know something about programming in general (or Java in particular), then this book isn’t a good fit for you. But if you don’t and you’re a total noob in terms of development, then I highly recommend it. This edition was released in 2014, so it’s not 0day material, but still relevant since the concepts didn’t change much.

2. Head first Java, 2nd edition. I don’t know if you’ve ever a book in the “Head first” series but if you did and liked the format then this book is a must too. Their format is to help you delve “head-first” into the content of the book. For example they will show you right from the first pages a program written in Java so that you can see what’s all the fuss about. Plus, they rely heavily on images as a way to help you understand faster important concepts. And the overall format of the book is somehow resembling more a comic book rather than a programming one. This way they help your brain adapt and learn faster, rather than being scared of the amount of new tech info. 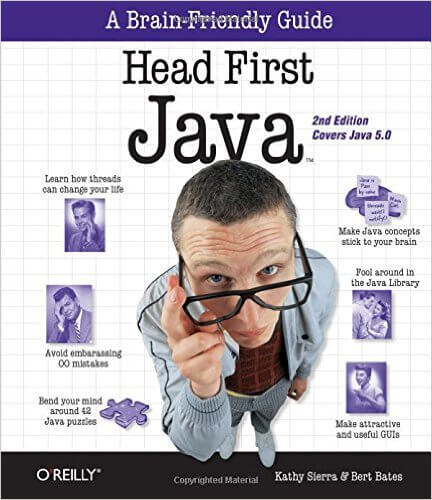 Here’s what I believe makes this book very good:

Now for the disadvantages, the book was last revised in 2005. While still highly relevant from a programming point of view since the fundamentals of Java are the same, you would still need from time to time (very seldom) to check the Internet for updated information on a topic. But again, this happens seldom.

3. Java: A Beginner’s Guide, Sixth Edition. This book is written by Herbert Schildt which is quite the celebrity in terms of writing programming books. The author is 65 and still young, given that he plays music too, and not any kind, but progressive rock. Back to the book, the author wrote several related to Java, including the “complete reference”, a book so thick you could use it as a weapon.

But this one is a bit more light on details and much more comprehensible by beginners. Still, at some point if you want to advance to more serious Java programming, you’ll make a good investment getting his Java Complete Reference edition too.

Out of the 3 books mentioned so far for Android development beginners, this one is the most serious and a bit more advanced than the others. I recommend this if you catch fast and are willing to do some extra research. Oh, and it’s one of the cheapest books.

4. Head First Android Development. Assuming you’ve went through at least one of the books above, it’s time now to head on to Android development. My #1 choice for this is “Head First Android Development”. Yes, I do have a thing for the head-first series as my mind functions in mysterious ways and tends to wander off when I try to focus on important things. This series though helps me concentrate a bit more, especially due to their funny approach.

The book was released in 2015, so even if Android added a new type of candy it’s very accurate. And don’t get me wrong, even if the Head-first series adds images and has a funnier approach than most other programming books, it’s not cartoon-ish by any means. It’s as serious as the studied matter. 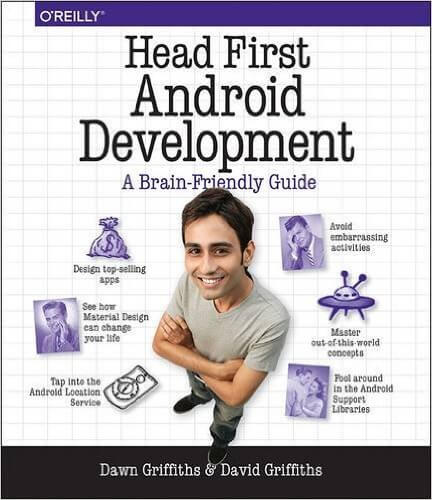 With a bit over 700 pages, there’s a lot to cover. And once you’re done with it, you’ll want to re-read it, at least the chapters where they create an app.

5. Android Programming: The Big Nerd Ranch Guide. This is actually the 2nd edition and it was released pretty much around the same time as the Head First Android Development book above. I always prefer books that are now at the “Xth/nd” edition because this means the first version was good and people bought it. And luckily my experience so far with “book sequels” wasn’t the same as the one I had with movie sequels (i.e. where the sequel sucks). 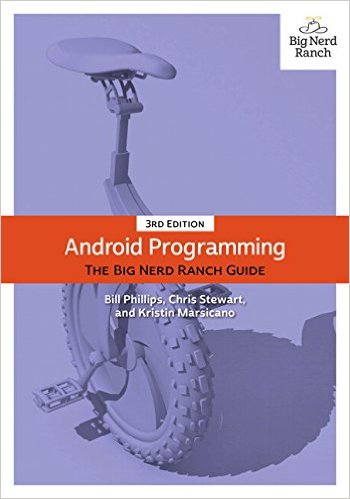 Back to the book, as the title suggests this is a bit more advanced than a “for dummies” release. I’d say that the first chapters are in the easy-medium class, while the latter ones go towards experienced. So definitely don’t start with this book, rather complete at least one of the first Java ones. Once the Java programming concepts are rooted, you can go onto this one and do actual app developments (you’ll get a few examples of those, including a GeoQuiz that looks kind of accomplishing to finalize.)

As a note, this is the 2nd edition but the author is very close to releasing the 3rd edition. That book will be released on February 18th so if you’re not eager to start you can pre-order it here: Android Programming: The Big Nerd Ranch Guide (3rd Edition)

6. Bonus book, Head First Design Patterns. I said I’d stick to 5 books but I can’t help recommending another one. The idea is this, Java development will help you understand the core of Android programming, the Android development books will help you understand the process of creating an app (and actually creating several), but I’d add to that mix design patterns. See, chances are that in real-life when you’ll want to develop your app you’ll encounter an issue that for sure someone else encountered long before you. Numerous hours and stackoverflow searches later you might find the right solution, or you might realize the entire way your app was designed is flawed.
This is where design patterns helps. A design pattern is actually a solution to a commonly occurring problem in software design, and one that can be repeatable. You won’t get Java code that you can directly copy/paste into your project, but you will get a sort of procedure that will help you solve that problem in the language you’re developing your app in. That’s why I believe a book about design patterns is a must too, completing the trio of books on Android development for beginners.

My recommendation is (yet again) a head-first solution: Head First Design Patterns. Maybe this could be the good’ol toilet time reading book, but I highly recommend it too. This book will help you recognize common pitfalls in designing software even before you start creating your app. So you’d actually solve a problem before it even occurs. 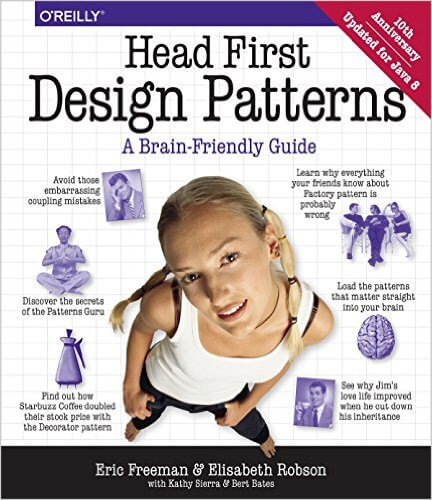 Again, with thousands of Android development books and related material out there it’s only a matter of how determined you are to start programming your own app. And obviously how much time you have. If you have encountered excellent sources that could help beginners in Android programming feel free to share a comment and I’ll consider adding it to the list too.

I’ll conclude with a few tips to help you on your Android development learning path:

I’ve been asked what Android Development books I took into consideration for this list. Below you can find the full list of 32 Android development related books for beginners that I considered – you can sort the list by Amazon rating, price and even release year: