Back when I was a teenager we didn’t have much online socializing to do, ‘mainly’ because there was no Internet on a broad scale. So we socialized outside playing, in school, in camps and all sort of enjoyable activities. It was popular back then to have your own personal ‘offline blog’. I call it that but it was more of a friendship album without too much personal stuff so that you could share it with others. The principle was this, I gave my so-called album to a friend, they made a page on what they thought about me and also glue in some photos (funny ones, love ones, …) added poetry or anything else that would make them stand out from the other ‘listings’. Because this circulated among all of one’s closest friends as a way to remember all the others. It was a precursor of modern-day yearbooks and even if dozen years later things seemed silly, nostalgia for those time made it all worth it. How did that look, well in the lines of the one portrayed below: 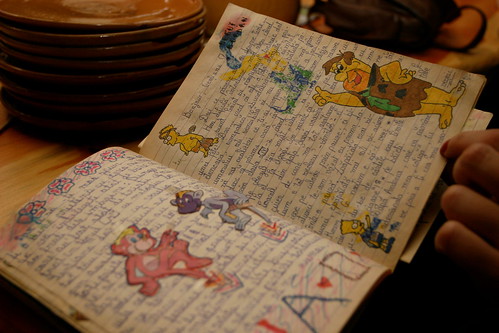 I loved my ‘offline blog’ more than I could ever say about Facebook, Google Plus or all the other in-your-face networks. It was much more meaningful and personal than the wave of posts you see each morning on a social network as your friends had to really think about what they write, not just throw in a photo of a cat saying ‘Awwww’.

Little did I know that what we did was actually an old technique called scrapbooking. It was basically a way to preserve personal, family and friend history in a form of a notebook that included photographs, artwork, text and other printed media. Scrapbooking dates back to the 15th century when in London it was a practice to have books that contain quotes, poetry, recipes and anything else that the creator of that particular book wanted it to contain. It evolved to a friendship album and when photographs were invented people started adding them together to create larger photos in a technique called photomontage. A photomontage is a collage of photographs or parts of photographs, where basically different elements are assembled in different forms to create a new whole artwork.

There’s a thin line between digital scrapbooking and photo collages but the main idea behind this is the technique of ‘stitching’ together various photos. If you own a digital camera most likely you’ve encountered a feature called ‘panorama view’, where what your device does is take several photos of a particular surrounding view and stitch them together to create a panoramic display up to 360 degree angles.

‘Photo Collages Camera’ was developed by TNDEV, a Vietnamese company created in 2011 by its two members, each with several years of experience in Android development. You can see how experienced they are based on how their creations are appreciated, with over 20 apps/games published so far in Google Play and reaching up to 5 million installs/30 days for their flagship product, ‘Photo Collages Camera’.

The app will allow users to create a collage of photos using one of the multitude of templates available. Just select a template, start adding photos from your gallery or by snapping new ones with the camera, adjust the background/border or add markup to your photos and that’s it, the collage is ready to be shared with friends or saved in your gallery.

Here’s a quick tutorial on how to use ‘Photo Collages Camera’:

‘Photo Collages Camera’ is one of the most complex app from its category and you can confidently choose it to create your collages. As a disclaimer, the app is monetized in 3 ways: via StartApp, which means that when the app first starts you’re asked if you accept to have a search access point added – this offer can be declined; via TapJoy from within the app, if you want to complete various offers to get more credits and purchase premium templates; via AdMob, which shows an ad above your work area when using the app. The app is free thus these are common monetization techniques for freemium apps, but if they bother you too much you can purchase its Pro version to remove these.

You can get the app via Google Play: Download Photo Collages Camera.