Turn-based strategy games are usually a type of wargame where 2 or more players compete against each other by taking turns, as opposed to real-time strategy games where the game is played simultaneously by its players. The first turn-based strategy computer game was published 36 years ago and was called Classic Empire. While I didn’t play that, I clearly remember its follower, Utopia (released in 1982).

I’ve had my ‘Heroes of Might and Magic’ craze in college and that was soon followed by a couple of other strategy games (Civilization, Space Empire, …). What I loved most about these games is the fact that you have time to think what your next movement will be and also plan in advance what you’ll do next based on what your opponent might do. You recognize for sure this phrase as it’s applicable in chess too, just that instead of a board with a certain number of pieces you have a large computer-generated world and many more pieces (units).

Considering my background in turn-based strategy games, I was extremely pleased to test a newly released game of this genre for Android devices, ‘Cosmo Battles’. The game was created by ‘Load Me’ a Kiev studio that develops custom solutions for Android and iOS in a professional manner (as you’ll realize from the game’s graphics and gameplay).

As the name suggests (cosmo refers to the Greek word ‘kosmos’, what is practically a synonym these days for ‘universe’) this battle game takes place in the largest environment ever known to mankind, the Universe.

In ‘Cosmo Battles’ you are the captain of the ‘Space Marines’ and your goal is to explore various asteroids, comets and space stations while fighting against enemies and their infrastructure. There are over 20 missions (more will be added) that start easy but as you progress so does the difficulty level. When the game starts you’re able to adjust settings a bit (music and sound effects level, language) and just tap on Play to begin your journey. You’ll be presented with a stellar map where you clearly see the places you have to go to (missions): 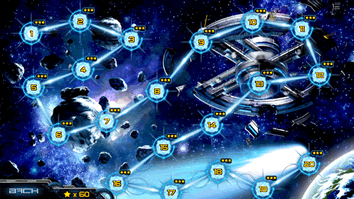 Over 20 missions are playable in Cosmo Battles

As you can see in the image for each mission there’s a star and a number close to it. That means that’s how many stars you need in order to play that mission (think of those stars as experience points). This is why in the beginning only the first mission is selectable as you don’t have any stars, others having the lock sign.

Each mission can be played in 3 levels, easy, medium and hard. While the explanation on the difficulty is obvious, at the end of each successful mission you’ll obtain one star for playing it in the Easy mode, 2 stars for playing Medium and of course 3 stars if you take on the Hard game mode.

At the start of each mission you get to select your ships/crew. You have 5 slots available meaning you can choose up to 5 ships from the available inventory to play with in a game. First missions will only let you get 1-2 ships, but as you go forward you’ll be able to fill in all your spots using the available units (of which there are six different types). Units can be upgraded in exchange for currency, that you obtain by successfully completing missions. 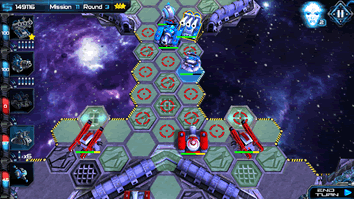 Various types of ships you fight with and against in Cosmo Battles.

For each of the units there are several attributes that can be improved through upgrading: health, damage, attack range, movement range, ammo. Health is the amount of life you get at the beginning of the game, damage is how powerful the weaponry on that ship is, attack and movement range are basically how far a unit can go in a single move while ammo is how much ammunition is available at the beginning of the fight for that unit. It’s obvious that some units will be slow and have a low range but very powerful and with a lot of health (i.e. tanks), while others will have a broader range but low health/damage (i.e. scouts). It’s a matter of balancing your team to be prepared for a particular mission. Very important is in which of the ships you place your Captain, as it will increase the abilities of that unit. During the game you can check each of these abilities for a ship by simply tapping on it (which will also pull up a menu where you can purchase power-ups): 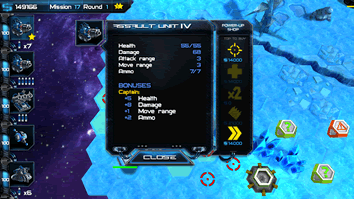 Tap on a ship to get a look at its stats and abilities.

The gameplay is fairly straightforward. You tap on your unit and then you’ll see its attack/movement range. Tap again on a destination to move, or on an enemy ship/structure to attack it. If attacking another unit, be aware that automatically each of the attacked ships will counter-attack automatically by firing at you (not the full damage of a first attack but enough to be noticed). My strategy is to try and lure units one by one and attack them with more than one ship to destroy it with minimal damage. After your movements are finished for that round, you have to end your turn and let your enemy do his turn (in this case the AI). 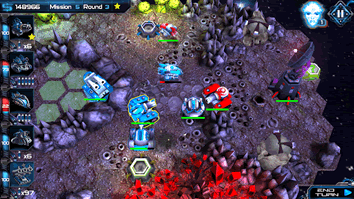 Second mission takes place on an asteroid in Cosmo Battles.

Throughout the game you will receive instructions from an artificial intelligence entity which is displayed in the top-right corner of the screen as a glowing robotic head (reminding me of StarCraft). If you want to revisit your mission’s objectives be sure to tap on it and bring up the screen where you can read more about the mission and what you have to do. As you progress through the mission there will be more messages in there, clearly shown as a number next to the iconic head. 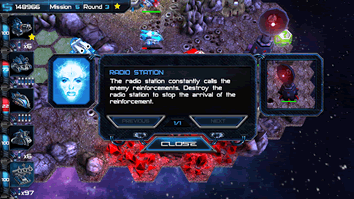 Your AI assistant helps with tips/messages throughout missions.

A very important aspect of the game are the randomly generated bonuses. Right when the game starts you’ll be able to see floating cubes and keep in mind that those contain bonuses (powerups, energy fills, movement fills, ammo) that will be extremely useful when fighting a difficult battle or when you’re outnumbered. To reach those you consume movement points, but most of the time is a good strategy to run away from your enemy in the direction of such a bonus. 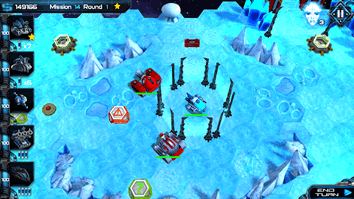 Bonuses are generated randomly on each map.

Finally, at the end of the game you’ll receive money depending on how well you did and how many enemies you fought against, as well as the important stars that let you advance to other missions. The game includes an achievement system which you’ll notice whenever you do something important, for instance there’s a ‘First Blood’ achievement badge that you obtain when you kill your first enemy, execution/mega killer badges when you destroy 100/500 enemies and so on. You can check your achievements separately in a section dedicated to display those. 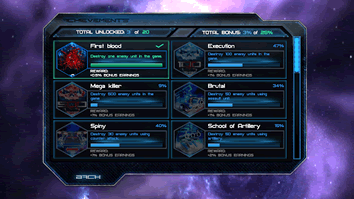 The game is very good and if you’re more of a video guy you can check the short tutorial below on how to play the first missions to get an idea of the gameplay:

Summing it up in ‘Cosmo Battles’ you’ll enjoy the turn-based strategy gaming system while benefiting from some of the features that you can expect from this genre:

The game has a free and paid version, so if you enjoy the free version you an upgrade anytime for a mere $2. You can get the game from Google Play: Download Cosmo Battles Free or get the Cosmo Battles paid version.