Heroo puts your mind to the test

Heroo (not a misspelling, Hero with an extra “o”) is a free color-match brain puzzle that just feels right when you have some time to spare and are tired of playing the same games over and over. In Heroo the rules are very simple but this doesn’t mean the puzzles are easy, as they grow in complexity after each stage. The only elements available in the game are some hexagonal shapes, each with a “slice” in a random color. When you tap on an hexagon, it rotates and the goal is to match color of the edges for each adjoining element. Sounds easy, right? Well, the thing is that moves are limited and if you run out of those (or time) you lose. 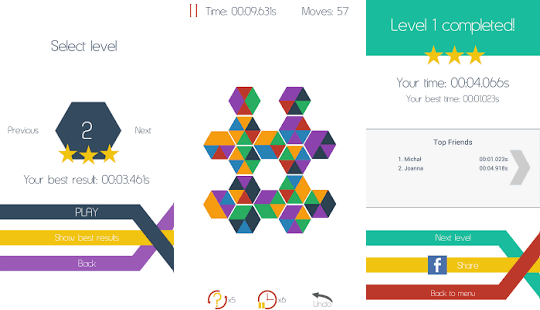 Heroo requires some logical practice, but this is good since it puts your mind to do some thinking. Here are Heroo’s (pardon the phonetic repetition) main features:

Fruit Ninja introduced a new genre, that of swipe-to-slice games. It’s fun to cut watermelons and bananas with a sword on a tablet but let’s face it, you just play it empty-minded. Here comes Word Ninja, a game where instead of slicing fruits you slice correctly spelled words. So you benefit from the same easy gameplay but instead you also do some thinking and practice your spelling. Don’t be fooled, the game is educational but not only for kids, as I’m pretty sure most can’t recognize the correct spelling for Fahrenheit in less than 1 second as it takes to slice it.

I’m not a native English speaker and I prefer Word Ninja over the fruit massacre one as I get the feeling I can improve my vocabulary (Potato or Potatoe?). Still not sure if in this digital version the saying becomes “the mind is mightier than the finger”, but I know that you get several features with Word Ninja:

Jumping Car, a game where a car does… guess what?

You guessed right, the car you control in Jumping Car jumps (though it might be referring not to the fact that the car is jumping, but that you jump over cars). The game is a reminder of an old Commodore 64 classic game called Burning Rubber. In “Jumping Car” the goal is to crash into as many other cars as possible, but also bushes and flowers if you want to get a high-score. Your car automatically accelerates so all you have to control is the left/right steering, jumping and braking. It doesn’t have levels, the game ends when you die and your score gets saved in the daily leaderboard and the total overall (if the score is worthy of such, not my case though). 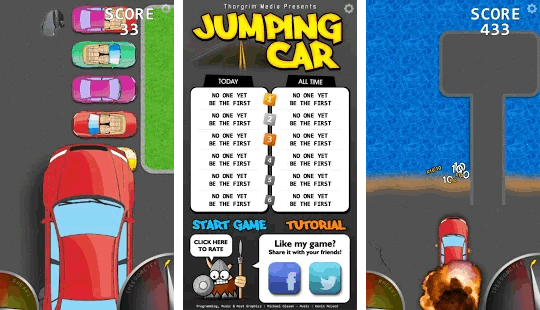 One thing though, I didn’t mention how you die. On your way you will encounter stones, barriers and even water that you need to avoid by driving around it or jumping over it with your car. If you don’t you die and have to start over. Here are some features I could think of after trying to get a highscore:

The game is free but it has in-app purchases, as you can buy extra-lives and avoid to start from the beginning each time. The free version also shows you an ad everytime you start it from the beginning, but nothing too in-your-face.
[pb-app-box pname=’com.wickedmedia.jumpingcars’ name=’Juming Car’ theme=’light’ lang=’en’]

Roamy, one app to rule the data access of all

Roaming is incredibly expensive, though there are some European directives that say it will get cheaper in the future. Still, if you’re not paying attention you’ll pay money, real ones. Think about this, most of the apps you have installed once they detect internet they go nuts and start transferring data (updates, messages, conversations, …). Depending on your data plan, roaming could be as high as $1 per megabyte. If you’re roaming and have your email client running unknowingly in the background, you’ll really regret that your mother knows your email address and forwarded you that funny PowerPoint presentation which has 20Mb. You’ll end up paying $20 for a couple of minutes.

That’s why you either disable data transfers completely, or use an app as Roamy that can limit your internet connection to be used only by your favorite apps and optionally set a limit on their data use. You’ll get a warning about data usage and you have real-time monitoring of current usage as well as other important features:

As an example if you only want to let Whatsapp access the internet and set a limit to it of 1Mb, you’ll still be able to get almost 150 text messages. Or if you’re travelling allow only Tripadvisor to connect and do its thing, this way you only pay for what you need.
[pb-app-box pname=’com.roamy’ name=’Roamy’ theme=’light’ lang=’en’]

The first Heroes games were devastating for my education as I played instead of going to school. There weren’t any cheap portable devices back then, as I would’ve went to school and be physically there, mentally elsewhere. Luckily enough the sequels were crap and I managed to continue my education.

Warriors 2: Road to Ragnarok is a turn based strategy RPG that feels just like the original Heroes. You assemble an army and start your adventure in the lands of Bors. There’s a story behind the game, with warriors that fight Wargods and their Titans to save the world, but the core of the game is the turn-based strategy fights. In the game you can pick your warriors from over 300 available ones, though they are grouped in 12 combat styles each with its own ability:

Right from the beginning this reminded me of Heroes, so play it only if you like that game style. Warriors 2 is free, the in-app purchases are optional, obviously.
[pb-app-box pname=’com.enigmagames.warriors2′ name=’Warriors 2: Road to Ragnarok’ theme=’light’ lang=’en’]