Free Bitcoins by playing Android games – scam or not?

Ah, le mirage du Bitcoin. A few years back I was very skeptic about Bitcoin. I thought it will fall as fast as it rose. At that point the price was about $200, and now Bitcoin is nearly $4,000. Had I invested in Bitcoin back then, I would’ve been a Bitcoin millionaire by now. I’m sure my experience isn’t unique, lots of others in my situation probably missed good opportunities. I was one of those that touted the end of Bitcoin, and my reasoning was that no way in hell authorities in various countries would allow it. Any yet, that’s where I was wrong. The IRS, no matter the country, wants to get a (big) chunk of your money, they’re not interested what form it takes. The source activity that produces those money is of interest, if that’s illegal there’s a problem. But the means of payment don’t count.

And Bitcoin will live long, mark my words. It will live for as long as there’s demand, and given that it is the main currency for underground transactions the demand will never cease. Alongside it, other currencies will rise and fall. Etherum for example. Demand is always there as illegal activities thrive. One underground market goes down, another Silk Road opens up. But, let bygones be bygones.

In the meantime all sorts of Bitcoin related sites popped up. It’s like a financial circus in terms of Bitcoin web & mobile apps. Aside the regular Bitcoin exchanges & wallets, there are also a lot of other Bitcoin gaming sites, gambling sites and even some called “Bitcoin faucets” that theoretically give you free Bitcoins. In reality you are served ads and because of the revenue they get off you, they will throw in some Bitcoin crumbs. BitKong is one such example, a browser based Bitcoin game where basically you tap and test your luck in a pyramid-like scheme.

Anyway, since the focus of this blog is Android and mobile related topics, I went and checked to see if these Bitcoin faucets are also available as mobile apps/games. And boy there are quite a few. My quick analysis shows close to 400 related Bitcoin apps, out of which almost 100 mention in some way or another “Bitcoin faucet”. Most of them are ad-heavy apps, that rely on the revenue they get from you to offer a very small chunk back to you in Bitcoins. 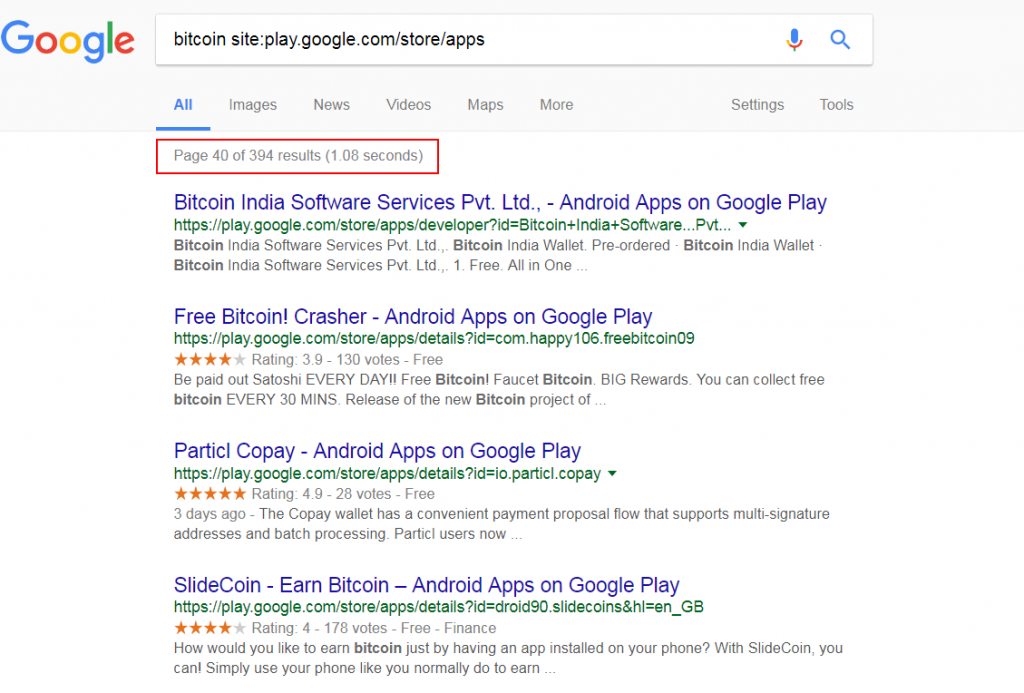 Here are some of the most popular Bitcoin games for Android that help you get some free bitcoins:

Created by Bitcoin Aliens, the game is quite popular with close to half a million installs. The company behind it owns several Bitcoin-related properties, so this establishes legitimacy. The game itself is rather basic, just stack some blocks as high as possible and whenever you stack 10 of those you can claim your Bitcoin wins. Here’s a quick overview of how the game is played:

I didn’t let the ads run completely, but you get the idea on what you can expect in terms of in-game ads. Even if you mistakenly tap and don’t stack those blocks correctly, you get a new chance by watching a video ad to continue playing. The stacking game has 100 levels, and you can claim your bonuses every 10 levels. There’s also a roulette that decides if you get a Big, Medium, or Small amount of satoshis (fractions of a Bitcoin). Other options to watch ads or install apps are available which give you more satoshis. You cannot withdraw your free earned bitcoins until you reach a threshold of 20,000 satoshis.

So the game actually gives you free bitcoins, however you can expect to play for weeks before being able to withdraw. And you’re going to be served a lot of ads in return.

This is a newer game by Bitcoin Alien, and still one that tops the charts with close to 500k installs. This company seems focused on bitcoin-faucet games so this means it’s a profitable business. That aside, it is not a scam game and it will really award you Bitcoin-bits for playing the game. Just that it will be similar with the Blockchain Game, since you will need to watch quite a number of ads everytime you do something. As an idea, in average I think you will get to watch around 5 ads just to get 10 satoshi (you can think of 1 satoshi as 1 USD cent). 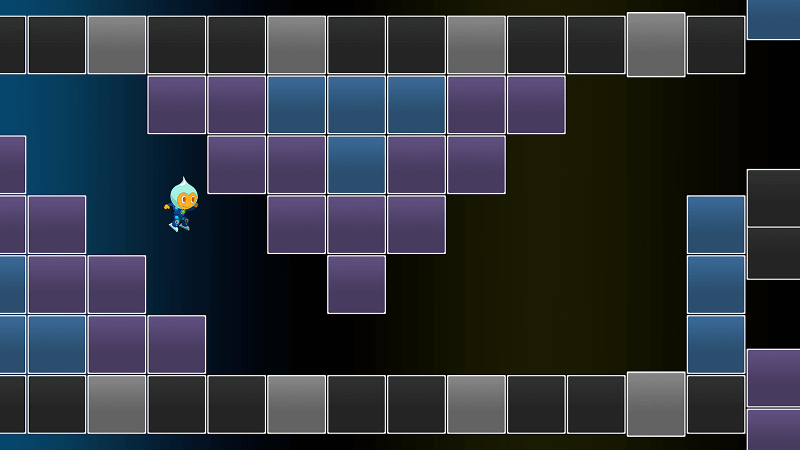 The gameplay is very basic here, you control a character called Daniel D’Alien and must run as far as possible advancing through levels. Every 10 levels you are able to claim a Bitcoin satoshi reward or continue running for a higher amount. There are also daily new missions and levels go into hundreds.

Yes, this game has a very “unique” name, you’d never guess what it is about ;). And yes again, the game is developed by the same dev as the previous mentioned titles, Bitcoin Aliens. It’s just that they seem to be the most prolific devs of games that give out fractions of free Bitcoins. This title is their first release and it has between 1 and 5 million installs, being in the market for quite a while. In terms of reliability you can trust it, as much as the others from Bitcoin Aliens, so if you gain enough free Bitcoins by playing it to pass their minimum threshold, you can trust it to transfer the money. 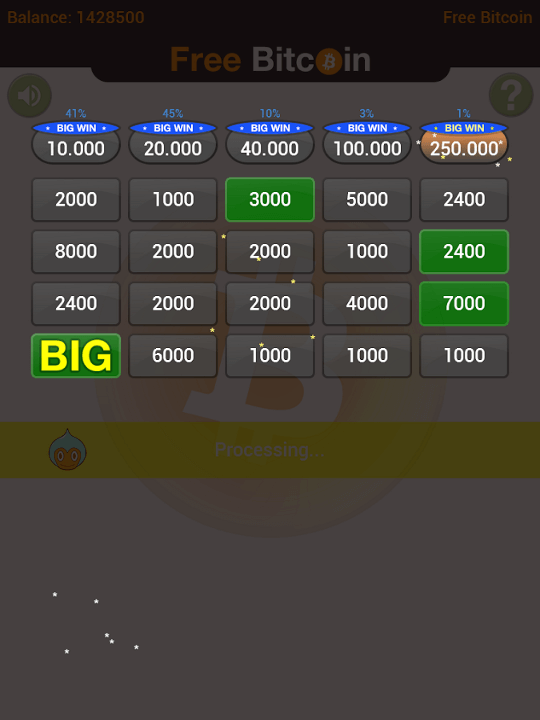 As far as the gameplay goes there’s not much here, a very basic game where the central point is based on your luck. Basically you are shown a list of 20 rectangles with numbers on them, and when you tap once it will randomly stop on one of those rectangles. The amount shown in that rectangle is what you’ll get in satoshis. There’s also a few BIG ones where you’ll be able to earn much more based on the probability multiplier shown at the top.

You can continue playing by watching ads and trying out your luck. Told you, the gameplay is very basic and all relies on luck. Every hour you’ll be able to run the drawing again. You can also get extra satoshis by performing additional tasks, such as for instance watching some ads, installing apps and so on. 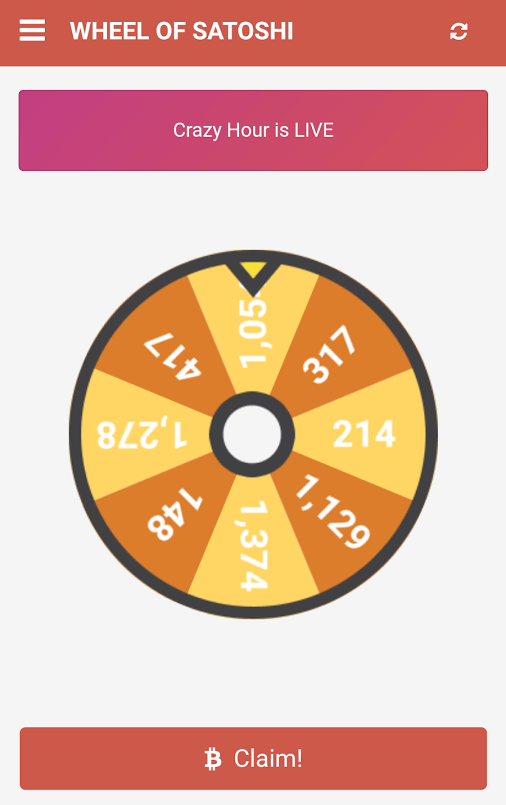 The Wheel of Satoshi is basically a “spin the wheel” game where the prize is free Bitcoin fractions. It’s developed by JPlabs and has at least 100,000 installs so far. From the user reviews, there are a few complaints about delays in processing payments but the author seems to reply to all and handle the issues. You’ll have to basically spin a wheel of fortune and see how many satoshis you get. Expect ads, as with previous games, a new thing being badges – you get to win some badges based on achievements. The interface looks smoother than Bitcoin Alien’s apps, so that’s a plus.

At the bottom of my list, however with a big question mark as the user rating is down to 3.3 which raises a question regarding its legitimacy. It’s a tap-to-spin the wheel game where you get free satoshis every hour or so. There’s also a scratch and match game where you have a lottery ticket with 6 items and if 3 are the same you win a bit of free Bitcoin fractions.

Lastly, a mention of another Bitcoin game with an “unique” (grin) name that lets you… drum rolls… win free bitcoins. This one isn’t developed by Bitcoin Aliens (though they have a same named game), instead it’s developed by PLAY4BTC. The company has 6 free Bitcoin related games that span various casino areas (slots, spins, lottery, …). The “Free Bitcoins” one is the only on their portfolio that has a rating higher than 4.2 and has between 100-500k installs.

Not really a game where you can win Bitcoins, it’s more of a Bitcoin faucet where once in awhile you’re notified you won some Bitcoins. No transparency at all on how those are randomly chosen. Lots of ads as usual. From the user comments in the Play Store they do seem to pay out amounts over 20,000 satoshis, not less. Given that usually you get around 15 satoshis for watching ads, it will take a long time to withdraw something. Still better than Fun For Coin though.

These are 6 Bitcoin games that I toyed around with, to this date I cannot say that I’ve advanced much in my quest to get 1 BTC, but I’m still trying. There are a lot of Bitcoin games that enter and exit the market, so this is a volatile niche. If you’ve played any of the games above or know other Bitcoin games/faucets for Android that you’ve had a great experience with, please post a comment. Same goes for negative feedback! As far as the question in the title goes, if free Bitcoin games for Android are a scam or not, it’s too early for me to draw a conclusion. But one thing is certain, you’ll need to spend a lot of time to earn some Bitcoin fractions, so in the end it all draws to how much is your time worth..,