There are 7 others that were part of the top 10 group of indie games:

Game promotion & app discovery in Google Play is a nightmare, most game devs don’t stand a chance at having their apps/games featured. That’s why everytime there’s a slight chance to do some app promotion, you (as in the developer reading this) should take it. The latest opportunity is taking part in the Google Play Indie Games Festival 2017 – at least for US/Canada indie game developers.

The Google Play Indie Game Festival is at its second edition, as it was held for the first time in 2016. So here’s what it is about:

Now comes the important part. If you are an indie game developer located in US/Canada, you have until August 6th (2017) at 11:59PM PST to submit your game. My suggestion is to submit your game even if you’re not too happy with its current state. Better to have your game rejected than not trying at all to promote it. The submission form is available here: Google Play Indie Game Festival 2017 submission form. 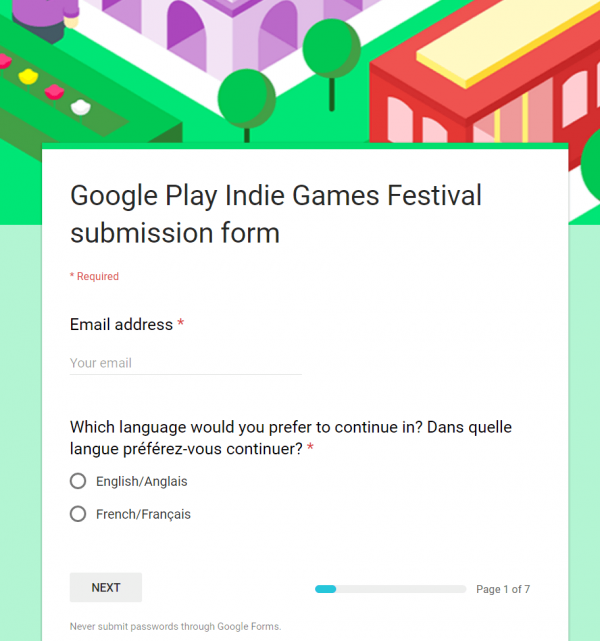 The finalists won’t be picked by popular vote however there’s a panel of judges that will decide who are the 3 winners out of the 20 finalists. Last year’s judges were picked from Googlers with experience in gaming but also CEOs of popular gaming companies (i.e. Ron Carmel from World of GOO, Dan Finden @ FunPlus). The 3 winning games last year were:

I posted the winners so that you’d see how their install base evolved after winning the festival. Again, no matter what you think about your indie game you should submit it as you have a chance at being picked.

Everyone knows about Google’s IO annual event and the Google Play Awards that are hosted during the event, but very few devs know about GPIGF. This means that the competition is low and you stand a better chance at being picked as a finalist here than in Google Play Awards. The festival agenda for last year looked like this, I’m pretty sure it will be similar this year but I couldn’t find anything official:

If you plan on attending, the event will take place on September 23rd in San Francisco. They do have a site set up especially for Google Play Indie Game Festival however all the dates in there are still showing 2016 so for some reason they didn’t update the site (and the official Google post for 2017 is not that detailed). There’s even a pre-registration page that says registrations are closed, but I wouldn’t worry about that since I believe it’s due to it not being updated.

There’s also the chance that the event wasn’t too successful last year and they’re cutting down in 2017 (less finalists), but who knows. Here’s an overview of what happened in 2016:

Anyway, good luck to all indie game developers that submit their game, and hope you win! If you are picked as a finalist I promise to review your game on AndroidB (just be sure to ping me).