A good product sells by itself. That seems to be the case for Android apps & games as well, as Google announced that they’ve introduced app quality as a ranking factor in their search & discovery algorithms. This means that we will see less and less apps with poor reviews and performance issues when doing searches in Google Play.

But one question arises, how does Google know your app’s quality? Well, it takes several factors into consideration:

1. Android vitals is probably the most important signal. Announced only recently at the Google I/O 2017, Android vitals will show performance issues your app has right in the Google Play dashboard. It uses information gathered from opt-in devices (i.e. users that gave their permission) and the information it shows you, will also be used to decide your app quality. 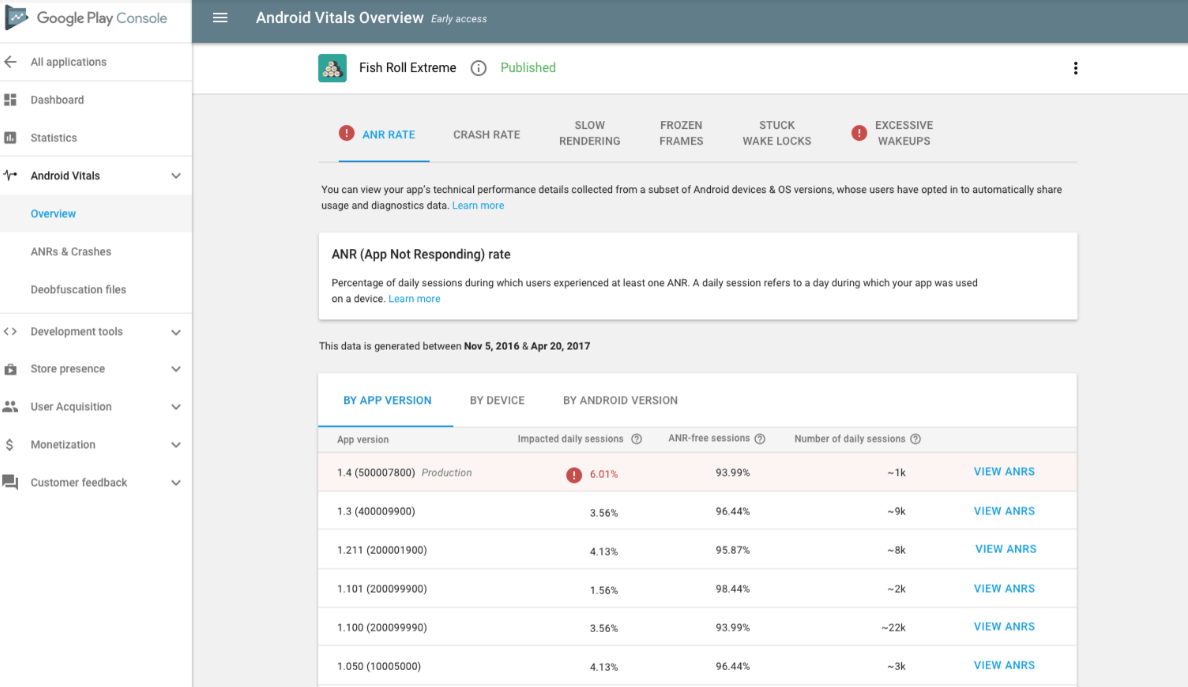 It will mark with an exclamation point the most stringent problems. For instance if your crash rate or ANR (app not responding rate) is above a certain percentage (I believe 5%), you’ll see an error sign. For rendering time, it’s considered slow rendering if it takes more than 16ms and a screen frozen if it takes more than 700ms to respond. A quick demo shows how Android vitals can be used to improve your app’s performance:

Since app quality is now a ranking signal, my suggestion is to keep this under strict observation and avoid those dreadful red exclamation signs. Whenever you see one, it means Google might penalize your app. That’s one of the main reasons I recommend from now on to pre-release the app as beta and only take it out of beta when these metrics are looking good. Otherwise you might launch a failing app/game right from the beginning.

2. Ratings & reviews. This is not something new, as I suspect Google was using ratings/reviews as a ranking signal for some time, but it’s now confirmed that they take this into account as well. They mention doing an internal analysis that revealed more than half of the 1-star reviews for all apps were related to app quality, which most likely was a key factor in introducing this as a ranking signal. It’s interesting how they only mention the worst rating analysis, as if to suggest that they only take into account the bad reviews, probably to calculate a “penalty score”. 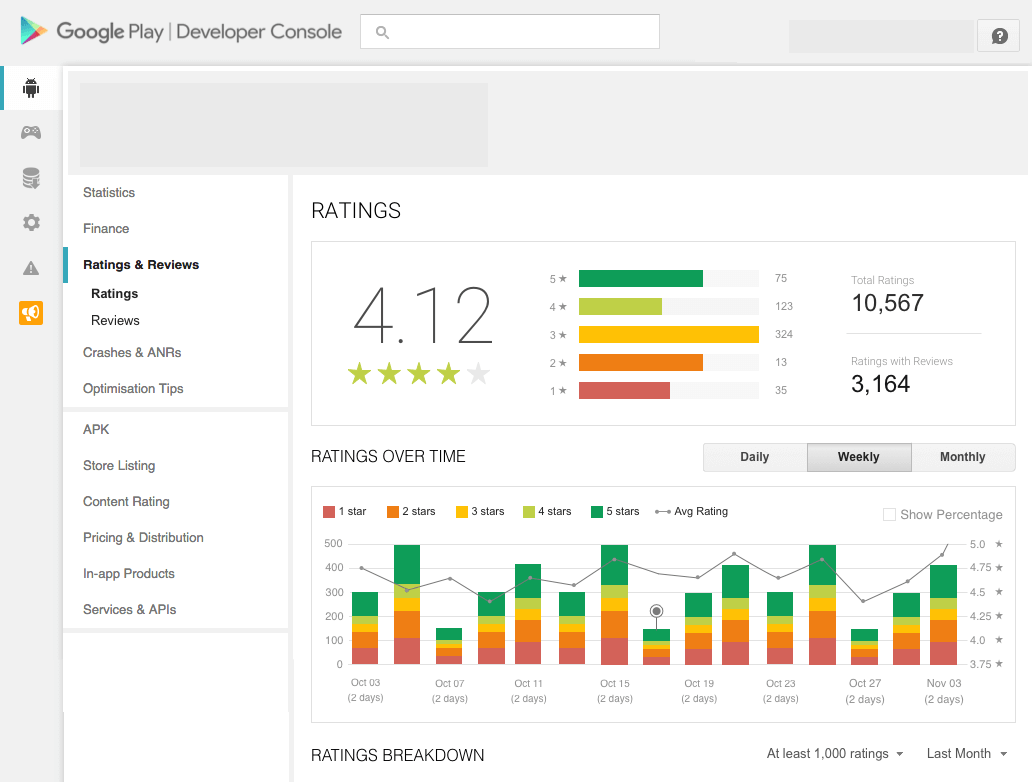 When it comes to user ratings and reviews, I always recommend some good practices to follow:

Google has some guidelines about reviews in its best practices section which I recommend reading entirely.

3. True installs. In their blog post it is specifically mentioned how they’ve “seen” people installing higher quality apps more, and uninstalling them less. This is a clear example on another metric they use to estimate the quality of an app. It’s the true install ratio, meaning users installing your app and keeping it on their devices. If users uninstall apps soon after installing them, it’s a clear signal that something is wrong and the app quality ranking signal will pick on that. 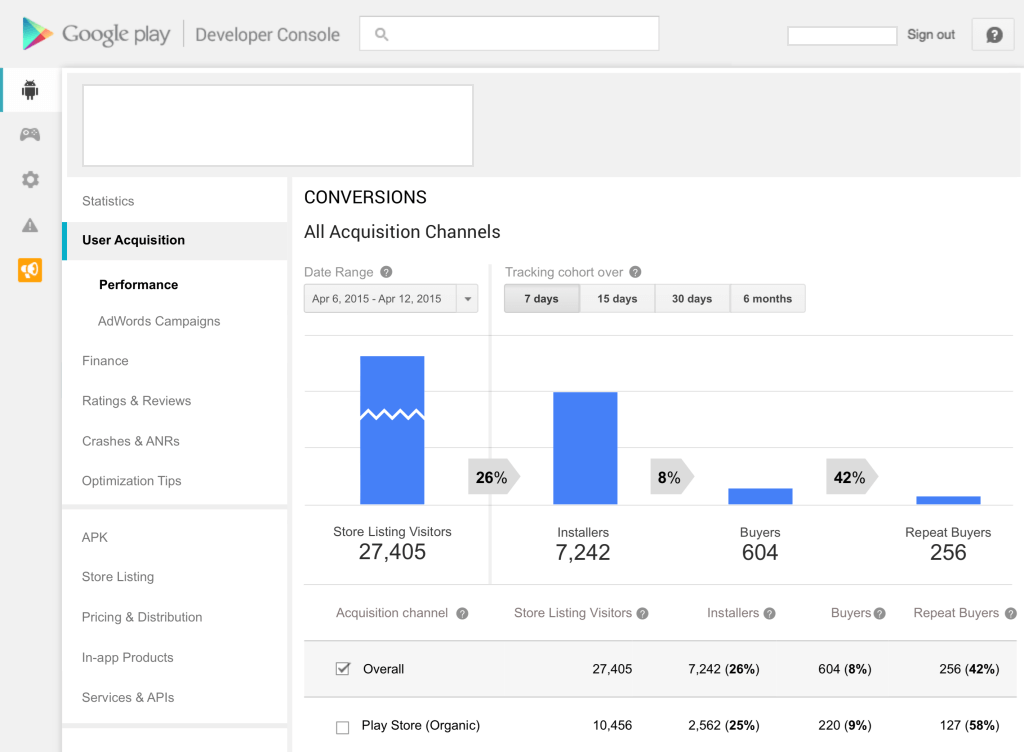 This means paying for app installs is not worth it, if the app is quickly uninstalled. Retention ratio is very important and you must keep it under control. If you’re using incentivized installs be sure the retention ratio is close to that from organic installs, otherwise you’re just wasting money. Key aspects here:

These are the 3 main factors Google relies on to evaluate the quality of your app. Master these 3 elements and you have the feedback you need to improve your app’s quality & thus gain a ranking advantage.

App Store Optimization is the key for driving organic true installs so the more you can “squeeze” out of each ranking element, the better. As app quality is a confirmed ASO ranking signal, it must be treated with the same importance as the other ranking signals. As a reminder, these are some ranking factors that Google takes into account and that should be on your to-do list for improvement:

And to name only a few. There are still a lot of other elements that influence ASO. Test, analyze & take decisions. With 3+ million apps in Google Play, every small thing you do counts. Google’s Playbook app is also a good resource.