In technical terms memory is a process through which your mind transforms external stimuli into storable information that can be later retrieved. The sound of ‘Honey, don’t forget the milk’ is encoded by your ears and stored up to the point where you remember it in the supermarket. Or you don’t and then you’re doomed when you get home because you ‘never pay attention to what she says’. It’s not your fault though, because memory can be short-term and long-term. While the long-term memory will last up to a lifetime, the short-term one lasts from a few seconds to several minutes. In 1956 George Miller published the results of his experiments showing that in average our short-term memory can only hold seven (plus or minus 2) objects. It became widely popular and led to the creation of the ‘Miller’s law’. So if you’re going to go to a supermarket and you have to buy more than 7 items, chances are you’re not going to remember them all and that’s what grocery lists are for.

During my childhood the most advanced computer I’ve seen was the portable calculator, thus entertainment had to come from somewhere else. Card games were popular for their social side and easiness in playing and I remember specifically one where you had to match pairs of cards. The rules were simple, all the cards in a pack (52 of them) were put face down and you had to turn 2 cards. If the numbers on the cards matched, you’d remove those 2 cards and put them on your stack. If the numbers didn’t match, you’d put them back in the exact same location and pass the turn to the other player. Not that I knew back then but this was a short-term recognition memory game also known as Concentration. It was widely popular in the US to the point where a TV show with the same name was created and aired for almost 30 years. 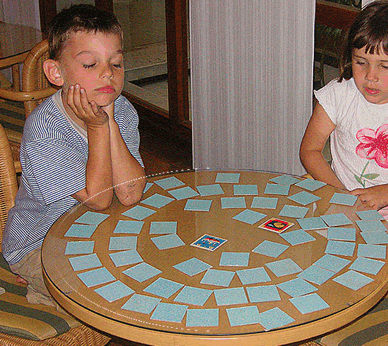 A typical game of Concentration

While the origins of the game are not clear, it might be a descendant of a Japanese game invented in the 19th century called ‘kai-awase’ (‘shell-joining’ in translation). This old game was played with 360 shells each having something drawn on their inside. The purpose was to match 2 shells with similar drawings and you can imagine how long it took to finish it given the hundreds of shells available – luckily more modern ones reduced the number considerably.

Memozzle is a game for Android based on this idea of card object matching. It is developed by Netplay Solutions, a company that started in 2006 with games for Java-powered phones. They have over 34 games published in the Google Play store, however Memozzle marks the beginning of developing native Android apps.

Memozzle takes the card memory match game idea into the social field as you are able to challenge and play against your Facebook friends, Twitter followers and other Memozzle players. Each game consists of 3 rounds and the idea is simple, at the end of the 3 rounds the player with the highest score wins. The 3 rounds gradually increase in difficulty, as the first one has 18 cards while the third one has 36. Not that my memory is any good but you can have an idea on how Memozzle is played by watching the video below:

The design is refreshing, a combination of cartoon avatars for the players, a large number of cartoon-like animals and objects plus sound effects contribute to the fun of beating friends with even shorter memory. As for the gameplay, it can be summed up in three different actions:

When you first start the game if you don’t want to connect using your Facebook/Twitter account you can simply join by creating a Memozzle one – it all happens in-game thus no need to confirm an email address or visit a webpage.

Memozzle’s dashboard will show the status of your games so far. First, right under the ‘Start a new game’ button, you’ll see the games that are pending for your turn, then the ones that are waiting for the opponent’s move and lastly a list of games you’ve finalized (both wins and loses). For better guidance you get to choose an avatar for your player and this will show up alongside your name. 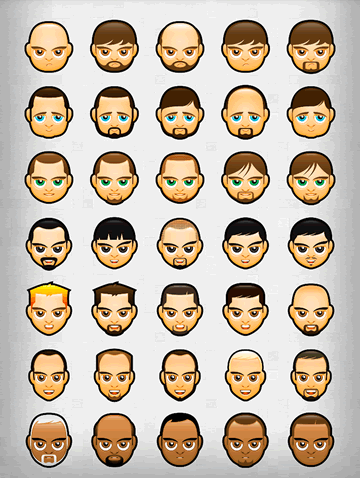 Avatar for your player

In terms of features, aside the game actions mentioned above this is what Memozzle offers:

Memozzle is free to play with friends from your social networks or the game directory. It has a paid version that lets you play offline and will also record your game statistics.
With Memozzle you get to practice a bit your memory or at least beat some of your friends that are doing even worse. This is just the first release and the developer said it will incorporate new features in the coming versions (such as getting a time jocker if you play lightning fast).

A: I am Patrick Raibaut, 43 years olds and I have been always linked to the tech industry, being a passionate of games. In the past, with my team, we developed some Java games on Nokia, Motorola and other devices. I have been out of the industry for a couple of years due to personal reasons. I have decided early this year to come back and focus on Android development.

Q: How did you come with the idea to create Memozzle, what inspired you?

A: Many Sundays after lunch I used to play with my little son a game where he had to look at the objects around him, after which I would ask him to close his eyes. In the mean time I would take one object out and ask him to remember which one is not around us anymore. That was my inspiration to design this game for mobile phones and tablets, I was looking to make it extremely easy to play and fast.

A: It took some time to define clearly the gameplay and concept. Taking into account that people always have little time, until I couldn’t establish clearly the concept of rounds with fast play we didn’t start to develop it. Once I finalized the gameplay details and all related concepts, it took around 4 months of development. But a game is never finalized, you need to improve it and add new functionalities for players.

Q: You’ve mentioned a time jockey card, what other features you have planned for Memozzle?

A: We have under development the concept of joker, with 2 types. One adding +10 seconds in a round and 1 that allows you to flip all the cards on the board for 1/2 seconds (we are still deciding that). During the 3 rounds you will be able to use only 1 joker (we still make tests to balance the game). These features will be released soon. Another feature we are thinking is to add a basic chat where you can say hello or poke your opponent during the game.

Q: Are you working on developing any new games and if so, can you share some details?

A: For the moment we are focusing to improve Memozzle. I have some ideas in mind for puzzle and brain games always with social features. But is early to share it know, these are just ideas that I am drafting.

Q: With hundred of thousand of games in the appstore, how do you make people aware of Memozzle? Does Google help new developers in any way?

A: It is not easy. You need to invest in marketing to be able to communicate to your users. We are defining some marketing campaigns to be able to reach enough users. We also hope that people will invite their friends to play. We are working to improve the social features. I know Google has the concept of Google Advocate to help new developers, we are trying now to understand how to get in touch with them. Also Google offers tools that make game distribution easier. I remember in the ‘old days’ (2005) how hard was it to distribute a mobile game with carriers, manufacturers…

A: For me the key in any game is simplicity, make it easy to play and in a way that people will not be bored. When I was a kid I was a hard player of Pacman and Donkey Kong, both games very simple in terms of game playing and scenario, but I still wasn’t tired of them. Examples of mobile games that worked quite well in the last years and have a simple concept: Fruit Ninja or Cut the Rope.

Q: Have any tips/advices for other developers that want to start working on a game? Any tools that you consider to be a must?

A: The first step when you have an idea is to check what has been done in that field, looking carefully what others have done good or bad. The second step, when your idea is clear define the full gameplay and scenario (usually I use paper napkins, it is not very high tech but I am used to it) before starting development. Third, during this process of creation keep in mind how you will monetize your game and start to think how you will get new players.