“What we wanted was flying cars, what we got was 140 characters”. It is a quote by Peter Thiel (founder of PayPal) and one of my favorite ones. I like it because it sums up very well the contrast between our past expectations regarding the future and the reality of present. In this present social is the new hype, everything is social and on a fast pace. People are on Twitter, Facebook, Google+ or socially connected through one of the other gazillion services.

Social connections aren’t bad, the highly evolved part of our brain (neo-cortex) demands it to improve our chances of surviving (groups survive better than individuals). We’re having more social interactions in a day now than our ancestors in their whole lives. But there’s a downside of socializing too much too fast with too many people, especially from a smaller device such as a smartphone: bad grammar.

Teens (actually tweens) are now forced into cramming their thoughts in 140 characters or less when they want to use Twitter, send a text message or chat. If on Twitter that’s a technical limitation, for other means is just a habit inherited from previous times (SMS messages had a 160 character limit). Thus they are obligated to abbreviate words. ‘Thank you’ becomes ‘10Q’, ‘Oh my God’ becomes ‘OMG’, ‘Laughing out loud’ becomes ‘LOL’ and even ‘Love’ loses meaning when it’s written as ‘LUV’. They call this ‘techspeak’ and say they’re using it to write faster and group more thoughts in a single message. But the problem is that this type of communication will be transferred to their normal communication channel as well. 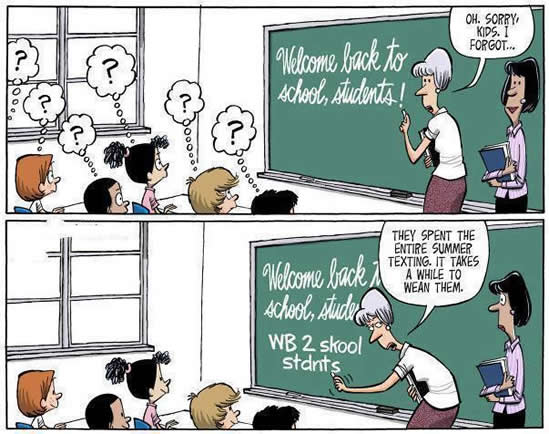 Sad but true with today’s generations.

“The relationship between text messaging and English grammar skills” is a recent paper that shows exactly the relation between texting/techspeak and bad grammar assessment results. The result of their survey shows that teens using this type of communication had their written grammar skills affected as well. Teens that have poor grammar skills will have lower chances of getting a good job and building a career that’s why it’s important to help them help themselves. Luckily there’s something you can do, as a parent, to help with their grammar: install Grammaropolis on their smarpthone.

Grammaropolis is an award-winning educational app that helps kids learn grammar the fun way. Its name translates to ‘The town of grammar’ (‘polis’ in Greek means ‘city’) and if we delve more even the word grammar derives from a Greek compound noun which translates to ‘art of letters’ (surprisingly related to the word ‘glamour’). The ‘mayor’ of Grammaropolis is Coert Voorhees, a popular author who used his teaching experience and passion for grammar to create a platform that helps children learn grammar and educators teach better. 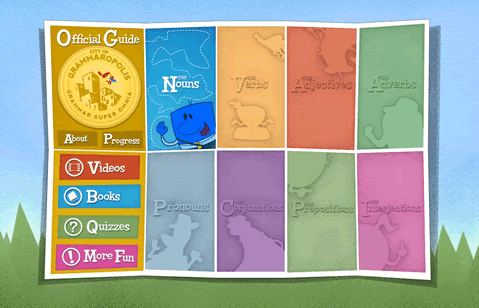 Grammaropolis uses the elements of a speech as animated cartoon-like characters that sing songs, have adventures recorded in videos, star in books and play games. Grammaropolis combines game-based learning with traditional quizzes and the result is a package more attractive to kids than regular grammar books. Its educational learning principle has several key points:

Since a picture is worth a thousand words, a video is priceless thus I did a short video presentation of Grammaropolis which you can watch below:

Grammaropolis is beautifully designed to be in line with their method of teaching. It seamlessly integrates video and audio, includes cartoon-like characters/surroundings and even the quizzes are fun. When it starts you get an overview of the 8 sections (neighborhoods) that are available, of which Nouns is included in the freemium edition, but for $10 you can get the other sections too: verbs, adjectives, adverbs, pronouns, conjunctions, prepositions and interjections.

Each of the speech neighborhoods has its own map (curriculum) with various checkpoints (9 areas). Each of those checkpoints teaches the user something about that part of the speech in a form of a video, illustrated book or song, at the end of which there will be a short quiz (3 questions). The quizzes are designed to strengthen the notions presented earlier. When the end of the map is reached, they will receive a badge to encourage them in trying the next section (or take this one again if there’s room for a higher score). Achievement-based learning at its best.

Here are the main features of Grammaropolis:

“Grammar super omnia” is the slogan of Grammaropolis and translates to ‘Grammar above all’, one that I approve with. I know it’s hard to convince kids of doing things these days, especially learning grammar, but you have an ally in Grammaropolis. Just install it on the tablet/smartphone your kid has access to and they’ll start it at least out of curiosity, given the cartoon-ish look of the app. Once they start listening the fun but educational videos, audios or browse the illustrated books, they’ll want more. It’s a small investment you can make for your child’s knowledge of grammar, one that will help them write (even speak) correctly. No more LOLs and BRBs, we want them to be the ones that invent the flying cars we’ll travel with to our pension resorts.