My first interaction with a smartphone resulted in an SMS message that had more errors than one of my sister’s Facebook shares, and that’s when I knew that tapping to write is not for me. That’s the main reason my smartphone is the Xperia mini pro which has a physical keyboard and if this phone hadn’t been designed by someone who hates fingernails (just trying to open the slot where you charge it will physically harm your nails) it would’ve been perfect.

My excuse for having typos in SMS messages is the touch-to-type approach that I will never get used to. But there are millions out there (and teenagers dominate the statistics) that have typos in messages just because they don’t have the basic grammar & spelling skills and they’re always in a hurry.

There’s still hope however, and hope has a name: Ginger. I’m not talking about the plant that does miracles for hundreds of years now, I’m talking about Ginger Grammar & Spelling Keyboard for Android, the only app in the marketplace that understands the context of your writing and offers rephrasing suggestions. There are others that do simple grammar/spelling checks and replacements, but Ginger G-S-K is the only one that understands context and helps you avoid embarrassments especially if you’re not a master in understanding when it’s ok to use “its” instead of “it’s” (pun intended), “your” instead of “you’re” or “than” instead of “then”. English is my second language and I can proudly say that I “gingered” myself, as not only they have a solution for Android but they also offer a desktop solution that you can install and it will integrate with Chrome, Firefox, Safari and Microsoft Office. The short video presentation below shows you how Ginger Grammar & Spelling Keyword works:

Once enabled, Ginger Grammar & Spelling corrects your messages (be it SMS, IM or emails) and basically everything you write using the keyboard. With Ginger G-S-K your regular keyboard will be replaced by this improved version, so nothing will go by without being proofread first. Here’s how you install the app and configure it:

That’s it, you’re spellcheck-safe now, everytime you’ll write a message or basically anything in a text box you’ll be able to press a “Ginger it” button to proofread and offer corrections on what you wrote. 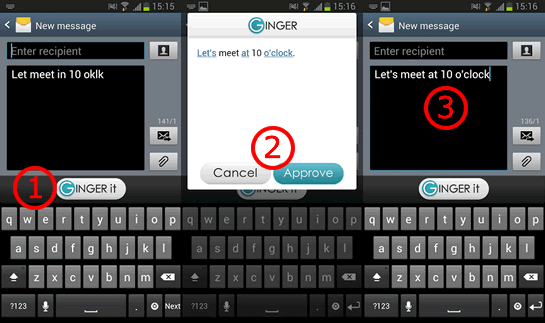 As I mentioned earlier they offer more than a mobile app, as you can get a desktop version on your PC and if you need a quick check-up you can use their online proofreader too, visit the developer’s website at http://www.gingersoftware.com/ to “ginger-up”.

This is what makes Ginger’ G-S-K special among other apps from the same category:

You can get the app on your phone either from Google Play or by visiting the official website.