Toy Soldiers: Riflemen is an Augmented Reality game for Android which you can play for free on your tablet or smartphone (for now the game works only on larger devices but smaller devices will be accepted in future releases too).

Augmented reality is a live view of a real environment in which elements are augmented by a computer using video, sound or graphics. If virtual reality replaces completely the real environment with a simulated one, augmented reality just “adds” elements to the existing reality – that’s one of the reasons why AR is becoming more and more popular, as the sense of reality is stronger. You’ve probably seen an example in the much-touted project called Google Glass where using special hardware (glasses) you see an augmented reality of the environment you’re in: you look at a tower and see how tall it is, you take pictures/videos of what you see just by saying it and many other interactions augmented through those glasses.

One of the best uses of augmented reality is, as you can imagine, gaming. Since smartphones/tablets are actually well-packed computers, they provide the ideal hardware for augmented reality games. “Toy Soldiers: Riflemen” is a strategy turn-by-turn war game that uses augmented reality to allow you playing the game using your tablet/smartphone’s camera by pointing it at an augmented reality marker (sort of a chess table pattern). 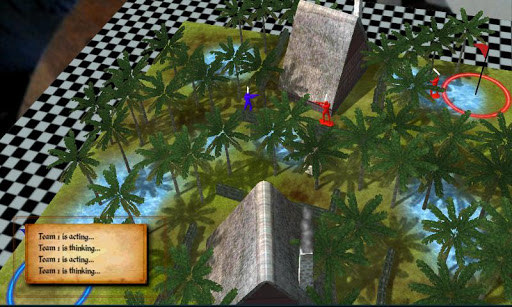 This is what you have to do to play the game on your tablet/phone:

In “Toy Soldiers: Riflemen” the purpose is to defeat your opponents either by capturing their flags, defeating the troops or simply keep your troops’ morale higher than your competitors. Each of these strategies depends on what game mode you’ve chosen to play:

The game has a beautiful soundtrack with 3D sound and particle effects, so it really offers a battle-like environment when playing it. You even start to feel a bit patriotic hearing that music, that’s how well chosen it is. The graphics don’t disappoint either, as you are playing in a 3D environment with buildings, trees and most important using your toy soldiers (each team colored differently). In a discussion with the developer he shared with us the plans for future versions of the game, which include adding new kind of soldiers, vehicles (tanks, grenadiers, machine gunners) and also have it where you’ll be able to play the game on other types of surfaces too (not just square).

As mentioned earlier, you can download this free game by visiting its Google Play listing page: Toy Soldiers: Riflemen. And don’t forget about the marker too, as without it you won’t be able to play.

You can read the full interview and get more insight into how the game was born below:

A: I decided to become an developer of Android apps about two years ago after spending some time in the game industry as a developer. I’d always intended to go into business myself and when hard times fell on the industry it was a good opportunity.

A: The idea for the game came about when my friend’s young son was playing with toys. When it was time for us to go out of the house he wanted to take the toys with him. So I came up with the idea of a game that could be played on the table top. I chose toy soldiers because of its wide appeal.

A: From conception to first release took about 9 months. The game went through a number of iterations before release until I was happy with the final game.

Q: Have you developed other apps or is this your first one?

A: This is my first app but there had been some in the works previously but I decided not to release for one reason or another.

Q: Do they target only the Android market or others as well (i.e. iOS)?

A: The game currently is available only for Android. We hope to release on iOS soon.

A: Getting an app noticed on Android is probably more difficult than making even the perfect game. CPC isn’t great in my opinion. I know developers who used admob and it’s a quick way to burn through money. PPI/ PPE is slightly better but only if it’s non-incentivized. I decided that review sites like yourselves is the good way to go. Your audience trusts your judgment so reviews are a good way to be visible and relatively cheap.

A: The most obvious expansion that i decided on was different kinds of soldiers and vehicles. You know, tanks, grenadiers, machine gunners. All of these would give more depth to the game. Also I want to expand the game area so that its not just square. Though I’m not sure how this will be done yet. Augmented Reality has its limitations.

Q: Have any tips/advices for other developers that want to start working on an app?

A: I’d say looking into a researching the market is a must. Though this is tough to crack and i think every developer for android knows this. Look at Rovio. They made something like 50 games before the success of Angry Birds. Or so im led to believe. Promotion is tough as i mentioned before. I know developers who burned through hundreds of dollars on CPC for little ROI. I think getting your game reviewed is the way forward now.

Q: Any tools that you consider to be a must?

A: This is a tough question because there are so many. I used Unity to make Toy Soldiers. Largely because its rapid workflow. I think AppBrain is a must for market research because of it’s abundance of data.