Scrabble is a word game played on a 15×15 tiles table where 2 to 4 players try to form words using tiles with letters marked on them. It was invented by Alfred Mosher Butts in 1938 who was able to assign values to each tiled-letter by performing a letter frequency analysis of various English texts (i.e newspapers). The more frequent a letter (i.e. “e”) the lower its value.

Each word composed this way has to be valid and appear in a dictionary. There are 100 tiles, 98 of which have letters on them with values from 1 to 10 plus two tiles that don’t carry any value and can become any letter. If you don’t know what scrabble is yet don’t worry, chances are you’ll start playing it too as about 1 in 3 Americans have a scrabble board.

Developed by CodeLean, a Danish-owned IT company, ABC Shuffle is a word game for Android that combines scrabble with social interaction. Think of it as a multiplayer version of scrabble, as it will allow you to play an unlimited number of simultaneous scrabble games with your friends (up to 4 players per game). This is what you have to do to start playing ABC Shuffle:

ABC Shuffle is designed to be very simple and familiar to scrabble players. Simplicity is a key to success and I believe in the principle of KISS (“Keep it simple, stupid”) as it benefits both the user (no complicated instructions to read and follow) and the developer (they’re able to focus on improving the game rather than correct a glossy button).

ABC Shuffle has an innovative approach to game difficulty, as it offers 3 different game modes, Normal, Medium or Hard. Playing the Normal mode allows you to have an unlimited number of moves, meaning you can place a word and try to play it to “test” if it’s in the dictionary without losing the move. The Medium play mode has only 3 allowed moves (i.e. they’re called lives in the game), which means that in a game you’re allowed only 3 wrong words. The Hard play-mode is for scrabble gurus, as you’re allowed only one mistake.

Score depends strongly on how well you can take advantage of the multiplier board cells. Multipliers are clearly marked on the board with a different color and a letter abbreviation:

These premium squares (multipliers) is what can win the game if you play them well. There’s another way you can get a big bonus (worth 50 points) if you get a Bingo (or Scrabble), meaning you are able to form a word using all the 7 tiled-letters that you are provided with.

Since you have an account, a profile is associated too. If you’d like to be recognized by your friends you can add a profile photo (using one from your gallery or take one from your camera) and your full name/sex/age/location. There’s even an option to add some custom bio about yourself if you’re feeling creative. This profile page will also show statistics on the game you played (how many wins/loses/draws) as well as your highest played word and the number of Bingos you achieved (7-letter words). 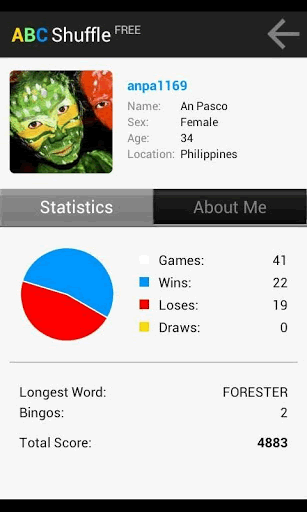 Your profile on ABC Shuffle

ABC Shuffle places conveniently on its dashboard 3 tabs with the most important actions: Games, History and Friends. The Games tab will show the current games split conveniently between games that are pending a move from your side and those that require your opponent’s move. For each game you see a brief description (what dictionary is used, whose turn is it, when it started) as well as how long ago was the last move and of course who you’re playing it with (that’s why the photo helps as it’s part of the game summary). The History tab shows how bad you’ve done in the past (or how well if you’re not me) and the Friends tab lets you manage your ABC Shuffle friends (you can add new ones or challenge them to a game). 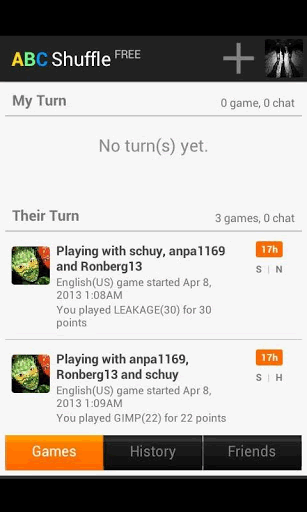 ABC Shuffle is free to play and you can download it from Google Play: Download ABC Shuffle
It does show some ads so if you’re bothered by those you can purchase the Pro version to remove them.

We’ve reached to CodeLean, the company that develops ABC Shuffle, to find out more about the future plans for the app, you can read the full interview below:

Q: Can you share some information about your company with our readers?

A: Codelean, Inc. is a Danish-owned company with development in Manila, Philippines. We offer mobile app and web development services and we are the leading provider of Agile training in Manila.

Q: How did you come with the idea to create ABC Shuffle, what inspired you?

A: We wanted to create a word game where more than 2 people could play together on the same board. We saw that 2 player word games were well-received in the market and it is our thinking that multiple players is a natural next step for this genre.

A: It has taken a bit more than 6 months for the development of the server and client side of this game. It is our first Android game and therefore it took longer than expected.

Q: Do you have other apps in the works and will you try to expand to iOS as well?

A: We are considering to develop an iOS version of ABC Shuffle and we are currently in the launch phase of a new game for iOS together with an external investor.

Q: With hundred of thousand of apps in the appstore, how do you make people aware of ABC Shuffle?

A: That is indeed a challenge. We will assign people and budget to various online marketing efforts and then we hope to achieve a word of mouth effect.

Q: What future plans you have for ABC Shuffle (more dictionaries, board designs, …)?

A: We plan to add more dictionaries to ABC Shuffle and more different game boards. We have a long list of features that we will add over time, and we are also very interested in receiving feature suggestions from our users.