Sokoban is a game created in 1981 by a Japanese developer that quickly became one of the Arcade classics. It’s impossible not to have played it if you had a computer in the 90s. You controlled a character in a warehouse and had to push boxes around in their designated storage locations to finalize a level. Even if in theory it sounded easy, the game was very complex and some of the levels required up to 1000 different moves, not to mention the fact that it was easy to do a mistake and move a crate in a corner and thus needed to start over.

Over 33 years have passed and Sokoban-like games are still very popular. If you take Android alone Google Play shows almost 10,000 apps that are related to Sokoban, a plethora of games that tries to fulfill this niche. Lime 3D is one of those games that clearly stands out from the crowd and judging by its graphics you’d be inclined to believe it’s backed by a very large company.

Lime is the name of a cute green alien armed with a backpack and an ability to push things. He is going from one stage to another in a cubic environment searching for a way to beam him out of that stage onto the next one and hopefully in the end escape this maze. 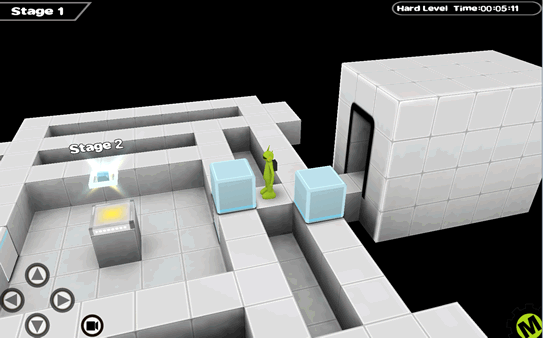 The goal in Lime 3D is to reach the teleporter by moving blocks.

Here’s an overview on how Lime is played and what features it offers:

With over 50 different stages you won’t get bored playing Lime 3D. It has 4 different difficulty levels, starting with Beginner and ending with Hard, basically the stages from the more difficult levels require more moves and thinking well in advance where to move your alien. I didn’t get bored while testing the game, as you can watch me struggle through the levels on this YouTube video:

Lime 3D isn’t free but since it costs less than a cheap hamburger it’s well worth the price. You can get it from Google Play here and help its developer improve the game: Lime 3D.