Google Play Instant: Try games before you install them

I hate smartphone clutter and after using it for a while you get to the point where there’s too much stuff on your phone. You install an app to try and see if it does what it’s supposed to do, you install games to test them out and before you know it you’re out of space. That taught me to be very selective with what I install and if an app/game doesn’t do what I expect it to do I uninstall it quite fast.

From an Android user’s point of view, this is actually a discoverability issue. It’s quite difficult to find exactly what you need without installing that particular app or game first. Partly because devs exaggerate what an app/game does, partly because Google Play doesn’t return the perfect match for you.

From a developer’s point of view, having users that uninstall your app/game very soon after they had it installed poses a ranking problem. Google takes into account the true install ratio (meaning users that keep the app/game installed for a while) and the lower that value is, the lower that app/game will be displayed in search results. Ultimately leading to a discoverability issue.

Google sensed it could do better in solving the discoverability issue and thus launched last year a test program called Instant Apps. Basically, as its name suggests it, this would allow users to try an app before installing it. 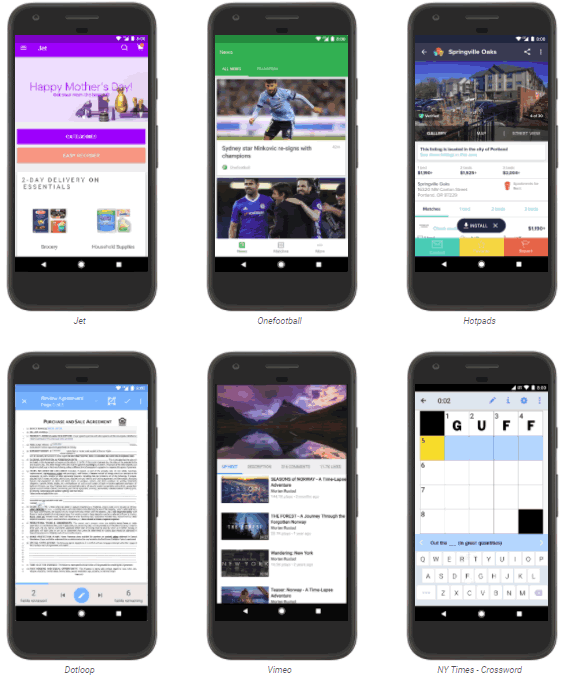 This is the “try-before-you-buy” model from desktop software ported onto mobile apps. Instant Apps offers benefits for both users and devs:

The only problem with Instant Apps is that since last year when it was first introduced, the adoption rate with Android devs has been very slow. Partly due to the effort involved into converting a regular app into one that has support for Instant Try and the lack of motivation. The second problem here is that more than 2/3 of all installations on Google Play are for games and not apps. Enter Google Play Instant, the “Instant Apps” version but for games.

Google finally extended the instant app tryout model to games as well. Launched only for a few days, Google Play Instant basically allows users to try out a game (partially) without having to install that first. The delay from the Instant Apps launch is normal, given that games are even tens of times bigger (in terms of file size) than apps. Right now the program is in its infancy, with only a handful of games being available through Google Play Instant: Clash Royale, Words with Friends 2, Bubble Witch 3 Saga, Panda Pop, Solitaire by Zynga, Jam City, MZ, Hothead and a few others. There’s even a collection created with games that currently support instant trys: Google Play Instant Games.

The main limitation here is size. Google Play Instant allows game developers to provide a file that’s up to 10MB in size (for instant apps the limit was 2MB). That’s why don’t expect wonders when trying out an instant game, as at most you’d be able to play a level or two or experience briefly the gameplay. But still, it’s much better than having to install 100+Mb just to find out you don’t like it. Here you can see it in action on trying out Clash Royale:

Aside the introduction of Google Play Instant for games, the Google Play Games app was also updated to help with discoverability. Now there’s video trailers in certain game categories (i.e. Arcade) and user videos related to games you are interested in (pulled from YouTube). If Google Play Instant for games will be more widely adopted than Instant Apps remains to be seen. In the meantime, as a user I have high hopes to see this implemented in as many games as possible.