AutoPIX, create visual timeline maps on Earth or in space

In 2009 a group of MIT students managed to take space photos with a budget of no more than $150 (source). Basically they used a camera attached to a helium balloon and to track the location of the camera they also attached a GPS smartphone. Their experiment resulted in some beautiful photos of the Earth from almost 20 miles (32 km) above sea level, where you can see the curvature of the planet as well as the deep black space. It was an important experiment for amateur astronomers, as after that many others did the same thing and took space photos improving their method.

But this didn’t influence only amateurs, as to launch a very small satellite NASA pays from $1 million up. So if those students did it for a few hundred dollars could it mean that NASA can do it cheaper too? It turns out that they actually did send cheaper satellites in space powered by smartphones (Google Nexus to be more specific). The PhoneSat program had its first success in April 2013, when 3 nano-satellites powered by smartphones (Alexander, Graham and Bell) were launched into space and sent back packets that could be intercepted by any radio amateur. This NASA sponsored program has as a goal sending in space nano-satellites powered by cheap consumer electronics, to try and find a cheaper solution. The success of this first experiment means it will continue and by the end of 2013 they plan to have improved versions sent into space, that will be able to send better photos of our Earth before de-orbiting: 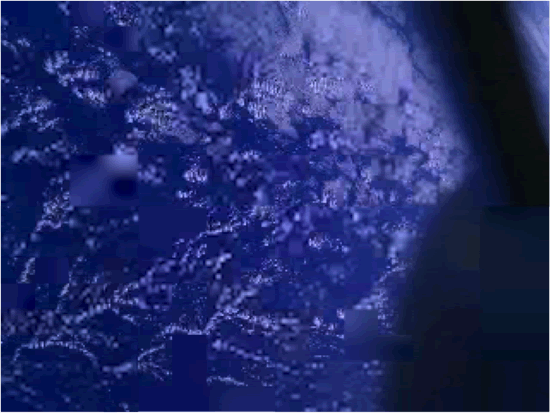 So what does this mean to you? It means that you can send your own nano-satellite imitation into space using your smartphone and a weather balloon. Given how powerful are smartphones these days you could take breathtaking photos and/or videos. I’m inclined to prefer the photos, as a video would only show the camera moving around basically making it very difficult to get still images. But if you were to have an automated photo snapping app installed, you could take hundreds of photos. Even if you’re not going to send your smartphone in space, I’ll still tell you of an app that once installed on your smartphone will take photos automatically and record the GPS location. AutoPIX is an Android app that does just that and more.

Developed by Kinetic Globe, AutoPIX lets you set up photo albums and take snapshots automatically while recording the GPS coordinates as well. These albums can be uploaded online automatically and shared with others. You can set the time intervals at which the photos will be taken and also uploaded, that’s why one of its possible uses is taking amazing photos of Earth from way above. Of course that this is not its only use, as for instance you can have it with you when you start your vacation and record this way, photo by photo, your entire journey. Since it also records the GPS location you’ll be able to see your photos pinned on the map.

AutoPIX can snap automatic photos but also record GPS locations. You can have it do both at the same time, or only one of these functions. Thus, since you can have it snap automatic GPS locations, you could send your kids in a short tour without worrying where they are – just start the app on their smartphone and you’ll see on a map shared online where they are. Sure, since this app takes automatic photos/locations and uploads them online silently, it could be used for unethical purposes such as spying on other people, but this is prohibited by the app’s terms of use and it’s also illegal in a lot of countries. 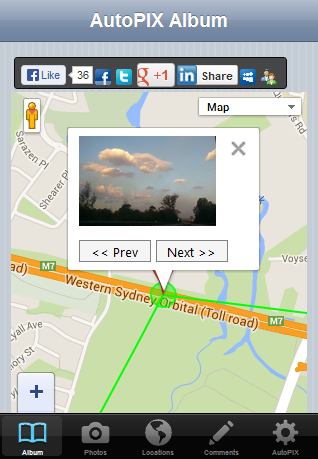 An AutoPIX album that shows photos with GPS locations

When you first start the app it will ask you for a PIN number, that is used to protect the app’s settings and your albums by default (for each album though you’ll be able to set a different password). So from a security point of view this gets you covered. Next you’ll be able to register your device with the online website where the albums will be uploaded, autopix.me. You can’t upload albums and share them automatically if you don’t have this set up. From the app’s dashboard you have 5 actions in the top-right corner: take a quick shot (will load the camera and any shot taken will be saved on the last used album), QR code scanning (loads a webpage if you scan a QR code), view information about the app, change the settings and last but not least create a photo album.

When you start the album, you’ll need to configure the album, the most important part being if you want to have the album set on manual, meaning no automatic photos, or on automatic where photos and/or GPS locations will be added every x minutes. There are also custom profiles, so you can create hybrid albums to fit your needs. Lastly, you’ll be able to manage your local albums and manually take actions on each, from deleting/editing their contents to sharing them online.

Here’s a list of the features that AutoPIX has:

With AutoPIX you can take automatic photos and GPS locations without even interacting with your phone. I like how you can set advanced options regarding this automation that will allow fine tuning the creation of your albums. Privacy is clearly well set as you can choose what to do with your albums, but if you want to share them publicly nothing will stop you. As an example on how those albums look online, you can check a public one here: AutoPIX Demo

AutoPIX is free to install and doesn’t have any ads. If you don’t want anything shared online you can use it to create local albums only, but for online sharing you have to create an account, which is still free. You can read more about the app on its official website at www.autopix.me or download it directly from Google Play: Download AutoPIX