Caller ID, also named calling number identification, is a phone service that transmits the number of the caller to the device of the person receiving it before the call is answered. Invented almost 45 years ago, it is the main method through which your phone can recognize who is calling you and even display the name of the caller if such as association was previously created. The most annoying human beings that use telephones, the telemarketers, are required (at least in the US) to use the caller id service thus disclosing their phone number when calling you to sell the ‘latest dial-up AOL card’ (as if it was still ‘95).

The problem is that caller id can be easily spoofed and some telemarketers intentionally hide or misguide it even if it is against the law to do so in certain countries. Maybe it’s fun to play a prank on your friend by using a caller id faker service (just Google to find it) and make it read ‘Mistress no. 1’ when he’s having dinner with his wife, but for sure is annoying as hell to receive a call late at night from someone that wants to sell something. US provides some protection against this by having a national do-not-call registry, which means you send your phone number in and supposedly no telemarketer will contact you, but it’s not obeyed by all of them.

Luckily there are solutions that can be installed on your phone that try to identify unknown caller id numbers. Contactive is an app for Android smartphones that tries to recognize unknown caller ids and show you who is in fact calling.

Iñaki Berenguer is one of the co-founders of the photo aggregator app Pixable that was sold for $26.5 million to Singtel, a telecom giant with almost half a billion clients. Instead of retiring to spend his money however, he gathered a team of highly skilled people and created Contactive. Intelligence agencies used the term ‘contact-ive’ (think of ‘operative’ to see the resemblance) for a sort of a black-book that had details on the multiple identities of foreign spies. Thus, by analogy, the Contactive app is your own little black-book where the identities of those that get in touch with you are revealed.

Contactive is a social address book that gathers information from a multitude of online resources to reveal the identity of those unknown caller ids or show you more details about people in your address book. It gets data from Facebook, Linkedin, Twitter, White/Yellow pages, Yelp, Google places, Gmail and Contactive’s global directory which accounts for millions of phone numbers. You can watch the presentation below to see it in action:

Here’s some scenarios where Contactive proves to be valuable:

When you first start Contactive you are given the option to signup using Facebook/Twitter or create an account directly with them. The advantage of using one of your social accounts is that once that connection is in place, you don’t have to make any further associations for it (i.e. to get updates from Facebook for people in your address book). Contactive will then start the process of upgrading your address book. However it won’t affect your existing address book, it will create a copy of it so that if you later decide to uninstall the app your contacts won’t be affected at all. 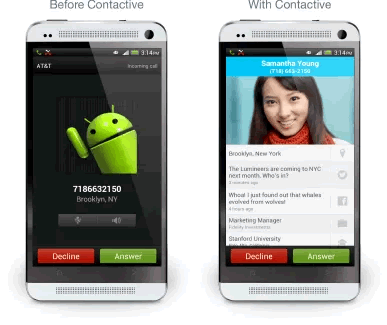 Call screen – with and without Contactive installed.

When the upgrade is done, you are ready to use the app. You can initiate calls by tapping on the ‘Keypad’ button and typing the desired number, see a history of your recent calls in the ‘Quick Call’ section, manage stored numbers via the ‘Contacts’ tab, group people in ‘Lists’ or read ‘Updates’ from social networks that you’ve connected with Contactive. Of course, you’ll need to login and connect the social networks that you use with the app to see these types of updates and have a better integration.

Here’s a list of features that Contactive offers for free:

Contactive is ‘proudly made in NYC’ and after using it for even a few minutes you can tell that is one of the big players in this niche of social address book / universal caller id apps. It will unify information from all your social networks and give you new conversation subjects right when you make the call. Your address book (the enhanced one) is stored in the cloud on Contactive’s servers, so in case something goes wrong you can easily restore it. The fact that they’re backed by Singapore’s leading telecom company can be considered as an extra reason to trust the app with your phone numbers, so privacy is not an issue. If you don’t want something stored with them, you can send an email and they’ll remove everything they have related to your account.

You can read more about it via their official website or visit Google Play to get it: Download Contactive.

Contactive, a big data company that focuses on real-time identity, celebrates on April 9th, 2014, the first anniversary of the beta launch of its CallerID app for Android smartphones. Launched one year ago this week, Contactive’s free CallerID app has changed the way people are making decisions about the calls they answer, by providing users with valuable information on unknown numbers in the moment that matters most: right when the phone rings. By automating the process of Googling phone numbers and names, scanning public directories, and sifting through multiple social network updates, Contactive instantly displays the most vital information about a caller as the call is coming in. In its first year, over 100,000 people have become active Contactive users and are enjoying enhanced information on their incoming calls, including photos, names, companies, addresses, or social updates. This makes their calls more productive and enhances the quality and efficiency of their communications.

“We are thrilled to be at the one year mark and couldn’t be prouder of the CallerID app,” said Iñaki Berenguer, Contactive CEO. “The platform has changed so much over the last year, but one thing has stayed the same: our desire to help users be prepared to interact with each other, providing a profile of anyone they interact with, in real time, on their native apps, with no effort, and leveraging existing information.”

The team continues to grow in New York City with 13 engineers, computer scientists, and mathematicians working on the product platform. Contactive CallerID has significantly improved its capabilities over the past year, measured by key statistics like the time to resolve a call in real time and the amount of telephone numbers it can resolve. Contactive CallerID identifies about 85% of the incoming calls in the U.S. in under two seconds, which is significantly better than anyone in the industry and much less time than the average seven seconds it takes most people to answer their phones.

To kick off its second year Contactive is working on several new initiatives and developing exciting partnerships on top of the Contactive Identity Graph. “We believe users are hungry for technology solutions that can make their daily routines more productive,” explained Berenguer. “Contactive is putting muscle behind complex big data problems to deliver identity information that helps people be more productive. We think that CallerID is just the beginning.”