You might not recognize Aaron Fechter by his name but for sure you recognize some of his creations. First of all, one of his companies was part of the merger that created Chuck E. Cheese’s, a chain of pizza entertaining restaurants worth close to one billion dollars. Then, he created one of the first animatronic bands (called Rock-afire) which were pretty popular. Lastly (even not necessarily in this order), he is the inventor of the game called ‘Whac-A-Mole’.

He invented the ‘Whac-A-Mole’ game in 1976, using an idea he saw at some Japanese guys who created a creature whacking game first. Aaron made the mechanism work reliably and instead of various creatures he used moles. Yes, I’m sure you remember the game by now, it’s that Arcade game where a mole puts its head out of a hole and you have to whack it with a soft hammer. When you whack it, another one comes up from a different hole (5 holes were in the original game). The game starts slow but its speed increases as it progresses. If you whack a mole, you get a score, if you miss it, you don’t get anything. Aaron didn’t trademark his invention and sold the prototype to a carnival operator. That guy sold it further to Bob Cassada of Bob’s Space Racers. Bob reverse-engineered the game and mass produced it under his own trademark. The irony is that Aaron ended up buying hundreds of games from Bob to use in his own pizza centers. Here’s Aaron explaining how he invented the game and how that was copied and mass produced by Bob:

The legacy of ‘Whack-A-Mole’ still exists and aside that popular game there are hundreds of variations in every type imaginable (whack-a-boss, whack-a-kitty, alien, bone, …). This is even an expression that is used to describe spending a lot of effort to do a futile/repetitive task with no progress whatsoever (for instance fending off repetitive email spammers).

Inevitably the game was ported in various forms for Android devices and ‘Turkey Smash’ is one of them. At its core the game has the ‘Whac-A-Mole’ idea, however in this case you whack turkeys over different stages and difficulty levels.

‘Turkey Smash’ was developed by the Canadian company Little Break Games, who has other titles such as ‘Turkey Hunting’, ‘Falling Sheep’, ‘Spot It’ for Android, iOS and WP7 (in-work). The game’s design fits the theme perfectly, as you play in environments such as a coop, haystack and around a puddle. The ‘enemy’ is represented by turkeys with and without helmets and that’s the target of your hammer. All throughout the game you are accompanied by sound effects and music (can be disabled if needed) that create a pleasant gameplay.

Understanding the game’s goal and playing it is very easy, as you control a hammer and you have to whack in the head the turkeys that show up via the 7 coop windows (in the case of the first level). As you whack one, your score increases depending on your reaction, however be on the lookout for those that have a helmet on. You’re not allowed to whack those as if you do you’ll lose one life and your score will decrease. As you have 2-6 lives, if you exceed in whacking more helmets than the limit your game ends before the 60 seconds run out. You can see the game in action in the video below:

So the main rule is whack as many turkeys as possible in 60 seconds, without hitting a turkey with his helmet on. At the end of the game you’ll get a score and also be accurate as that’s a separate scoring element too. The game has 3 different modes:

When the game starts you’ll be able to see its dashboard with all the actions that you can do: disable ads ($), turn the music on/off, adjust the level of sound effects/music, read the instructions, change the options, share the game via Facebook and finally see top scores (via Shareloop). 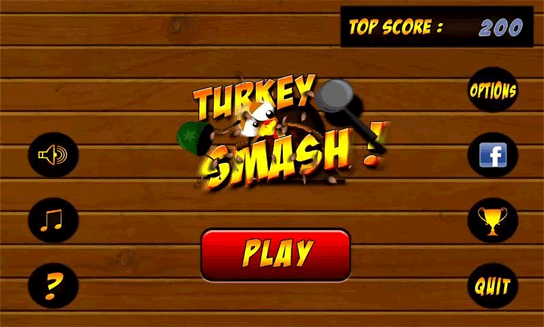 When you tap on the ‘Play’ button you have to select one of the game modes and have 3 seconds to prepare. The game starts and you control the hammer with your finger, as that’s the only action available during the game. Tap anywhere and that’s where the hammer will hit. Here’s an overview of the features for ‘Turkey Smash’:

I had fun playing it, my kid did too so I can’t say that this game is for a particular age. When you want to have that feeling of playing ‘Whac-A-Mole’ you can install and play ‘Turkey Smash’, especially since it’s free. You can also enable Scoreloop and access its social features.