AppAnnie publishes yearly stats based on appstore activity. And if you look at some of that data your mind gets blown away. In 2016, total apps and games installs exceeded 90 billion. In 2017 it grew 20% quarter by quarter so this means it will exceed 110 billions. The total number of hours spent by users was around 900 billion hours in 2016, with probably 1 trillion hours spent this year. And 90% of that is games. Users installing and playing games.

What you won’t find in any public stats is how many of those playing hours happen on our “pass-times”. You know, waiting in line somewhere, commuting, waiting for your wife to finish The Tour of The Mall, and ultimately on the toilet. I can’t even think about going to the toilet without taking my smartphone with me for some casual gaming, the same way a great historic figure put his newspaper under his arm when heading into the bathroom (Al Bundy). *Worldwide trends even show an increase of the number of men that voluntarily decide to pee sitting on the toilet just to play more (*based on personal experience). And this image sums up all my blurb on this subject: 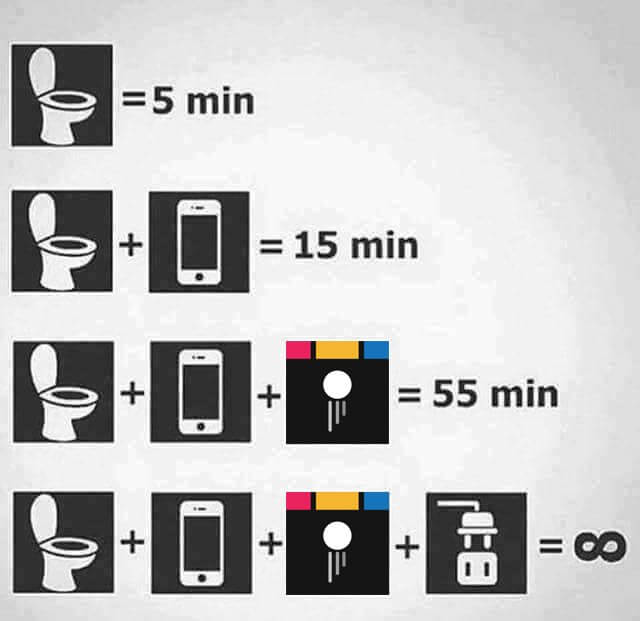 So in retrospect, 1 trillion hours spent on apps and games doesn’t seem that much alone. Joke aside, casual gaming is on the rise and nothing helps pass boring time faster than a good pick-up-and-play game. Masters in this category are the devs behind Ketchapp. You see, I believe Ketchapp is for mobile gaming what ketchup is for pizza, that smooth thing that makes a good thing better. Get it, ketchap … ketchup? Oh how I crack myself sometimes.

I reviewed one of their games (Sky) almost two years back and recently I got my hands on their newest title, Space Frontier. Not sure if it’s about space as the last frontier or as in space is actually a frontier but one thing is for sure, the purpose of this game is to launch a rocket into space. And gameplay is as simple as it sounds, the whole play area shows a rocket next to a launchpad that you tap on to release modules. Tap too fast or too slow and the rocket disintegrates into the air faster than Kim Jong could say “Off with their heads”. Each module has a small green bar so ideally you’d need to tap right when the module bar is close to that. You can see my attempt at reaching the skies here:

Smart simplicity is the perfect keyword that depicts Space Frontier. The design, as usual with Ketchapp games, is just perfect, and the gameplay makes it perfect for pass-time. The goal here is to reach as high as possible. The higher your score, the more coins you get. And you use those to customize your rocket or buy upgrades for it, adding more modules which in turn leads to higher scores.

In lieu of a conclusion

Space Frontier is freshly launched (one week or so), and yet it still is on its path to 500,000 installs with mostly positive reviews. It does show some ads after a couple of game plays, but those bothered by it can remove ads with a small IAP. Users that appreciate casual gaming will love it, those looking for deep/meaningful games can go chess themselves.

I for one am grateful to Space Frontier for helping me get through some awful times, a summer sale at the mall I was dragged into. So if you’re looking for a fun casual game with a touch of physics, get Space Frontier – you never know when it will make the difference between being bored to death and having a great time.