APP Review Times: How fast will your app be published

How long does it take for my app to be published on Google Play? That’s a question I receive occasionally and mainly from new devs. The answer is pretty simple, if your app doesn’t get banned then it will be published within a few hours. Usually that’s under 2 hours with the quickest turnaround under 45 minutes (submissions during week-ends get approved slower).

Google stated (in 2015) that it manually processes app submissions so the question is how are they able to do it that fast given that there are thousands of apps submitted daily? Well that happens because submissions go first through an automated process. That automation will basically scan the app, analyzes it to be virus/malware-free, verifies that it doesn’t infringe the content guidelines and only after that it will send the app to the manual reviewers. Their automation process is even able to recognize the images you’ve used in the app and see if they contain nudity or other forbidden content (i.e. copyrighted images).

For Existing apps, whenever you have an update to push things go smoother as the status shown in your dashboard will be Update Pending then Published once everything is ok and the app update was accepted by the reviewers. However, the same automated + manual reviewing process takes place for updates too, and if your app update is not compliant to the policies then you’ll get Update Rejected, app Unpublished or worse (Suspended/Removed).

When you submit an app for review for the first time, most likely you want it published as soon as possible. That’s the Standard Publishing method Google Play allows devs to send apps for review. However, recently they’ve introduced a new publishing update method and that’s the one I recommend you do: Timed Publishing. Here’s what this option does:

I always recommend using Timed Publishing because it gives you control over when your app will be available for users. This gives you flexibility to coordinate an ad campaign exactly at the time your app update is available or other marketing ideas you have prepared (i.e. submitting your app for review by third party app review sites). The only major downside to Timed Publishing is the fact that (at least for now) it is available only for app updates, not for publishing new apps. I believe it is just a matter of time until they make it available for new apps, and you should use it at its full extent for updates since it is important.

Back to the app review times and how fast Google Play will publish them, here’s are some poll results from a recognized Android community where devs shared insights: 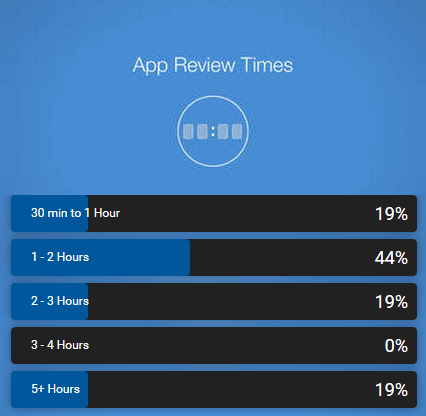 As you can see more than 80% of the devs shared that their apps/games were approved in under 3 hours, with a strong indication that it will actually take a bit over 1 hour. That unless your app isn’t flagged for some reason. This data is not official Google Play information, the only official mention of app review times is that your app will be published “in a matter of hours”. While Google will also publish apps/games during the week-ends, my recommendation is to avoid submitting an app for review late Friday or Saturday/Sunday. Even if the competition is lower (i.e. less devs submit during the weekends), traffic to the site is also lower and the probability of getting traffic right from launch day is reduced.

Unlike iOS, where app review times vary a lot as there’s more manual work involved, on Google Play you have a high chance of publishing an app or an app update in a matter of hours. It’s the countless development hours prior to releasing that delay having a published app.

Just to keep this data accurate if you are a dev that recently published an app on Google Play feel free to share in the comments how fast was it approved. Or you can share it on Twitter with a hashtag of #androidreviewtimes and I’ll pick that up. In the meantime, good luck devs with your app launch!