Whether we like it or not digital communication is part of our lives for most work fields. Emails, calendars, social media, chats & many more activities we engage in daily for personal or work reasons. More and more of these activities are done from smartphones lately, as you practically have the power of a desktop computer in your pocket. Nothing wrong with this here, however one of the most pressing challenges in this case is keeping your work apps separated from your personal ones on the same device.

You receive email on your work account, but you’d like to check (usually with the same app) your personal account. You have a calendar for work, one for personal items. You’ve got your Facebook/Twitter/Instagram/… social accounts for your personal life, but also for work. While most email & calendar apps have support for multiple accounts, how do you keep your social media accounts separate yet on the same device given that none support multi-account? The answer is application virtualization – basically creating a “container” inside your Android OS where apps can be installed separate from the main OS apps. Sort of like the Inception principle but for apps.

And this is not applicable only for social media accounts, basically for every app that doesn’t have multi-account support. Extending the principle to games, what do you do now if you want to play the popular Pokemon GO with 2 different accounts but on the same device? Or Clash of Clans if you’re eager to play and not wait X hours for a building/upgrade to go through? App virtualization is the key here too and one of the most popular Android apps (if not THE most popular one) is Parallel Space. 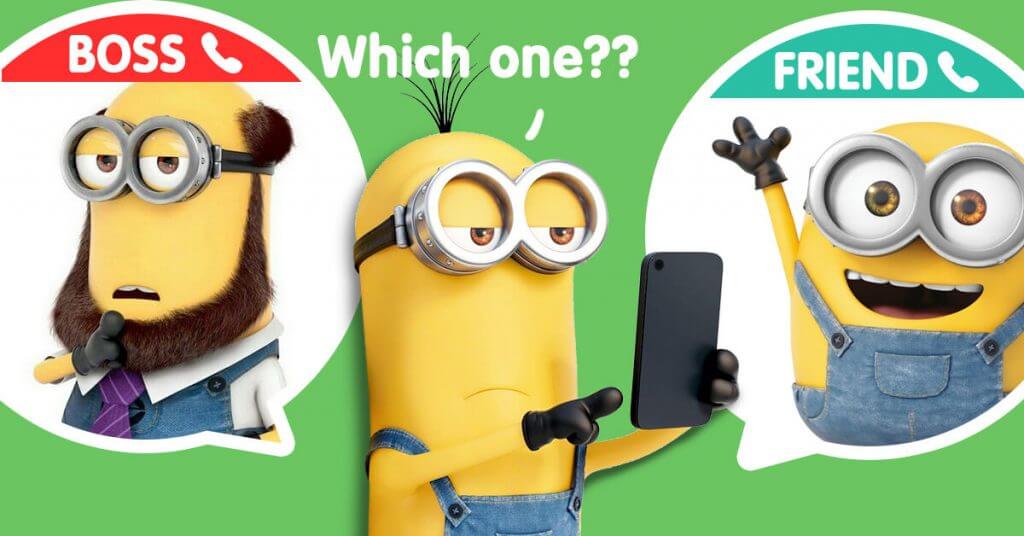 Parallel Space helps more than 40 million users log in to multiple accounts simultaneously on one device. It also includes an unique Incognito Installation mode that protects your privacy by making apps invisible on the device. It is an app virtualization engine based on MultiDroid and here are some amazing case studies that show what you can do with it on a single device:

Parallel Space basically helps you balance your work & personal life easier by logging in with different accounts on the same device. No matter if those are social apps or time-consuming-but-fun games, Parallel Space is the key to multi-accounts.

Clone apps. Parallel Space will allow you to clone any app or game and use multiple instances simultaneously. It lets you log in using multiple accounts to any social network, thus you can use both your work and private accounts. You can also play the same game simultaneously from 2 different accounts and much more. The process is very simple, just start Parallel Space and then you’ll see a list of your apps/games from the main OS installation. Next you can select one to be cloned and once that process is finished you can start that particular app both from Parallel Space and your main OS. And I’m talking literally about any apps you have installed (even your Calculator app can be cloned). It’s like having your own embedded operating system within the main Android OS. 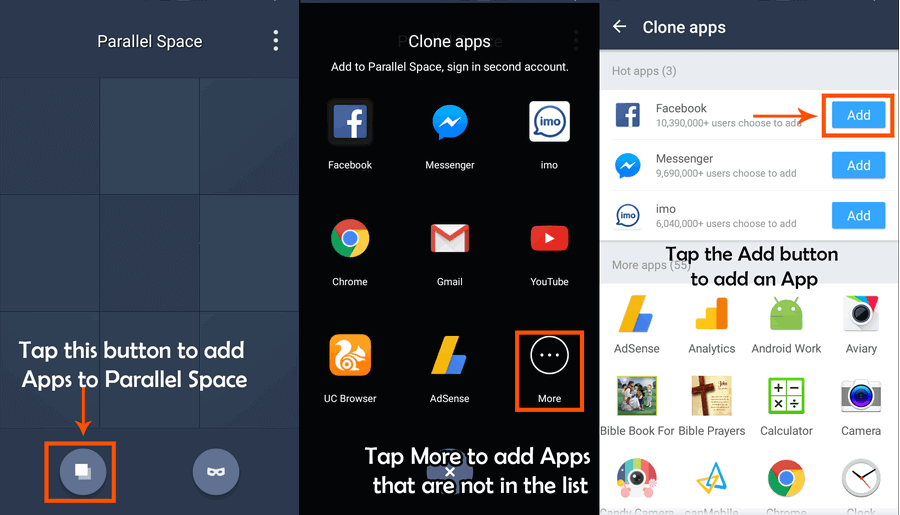 Incognito installation. Protect your privacy by installing apps and games in Incognito. What this does is it let you install any app from Google Play without leaving any traces on your device. That app or game is available only from within Parallel Space. Basically if you want to have an app that doesn’t show in your list of apps you can install it in incognito mode and access it only via Parallel Space. That’s a sweet spot to install your games only for you – my kid loves to check my smartphone anytime he gets his hands on it and see what games I have, but now I can keep only for me the ones that really count. Don’t judge me, he’s too young to play games anyway. 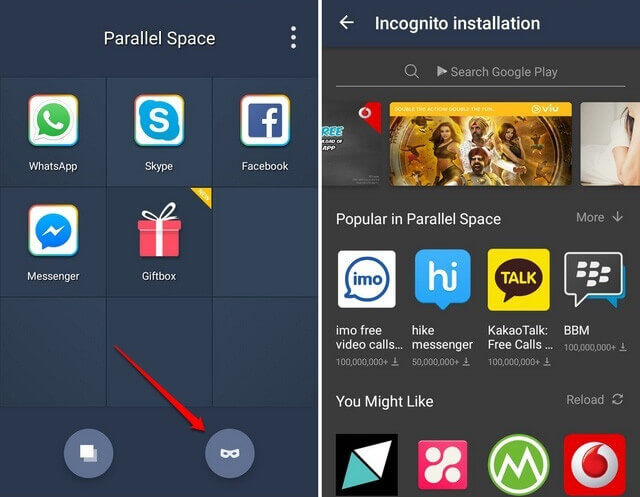 Privacy. Since you can install apps and games in Incognito mode accessible only from Parallel Space, it is advisable to password protect it. The app will let you set a normal password and this way anytime it is started you can access it only by entering the correct password. Alternatively for more security you can use fingerprint password that’s basically impossible to crack unless you press your finger on the scanner. This way you don’t need to worry about prying eyes and keep everything that contains sensitive information in Parallel Space. 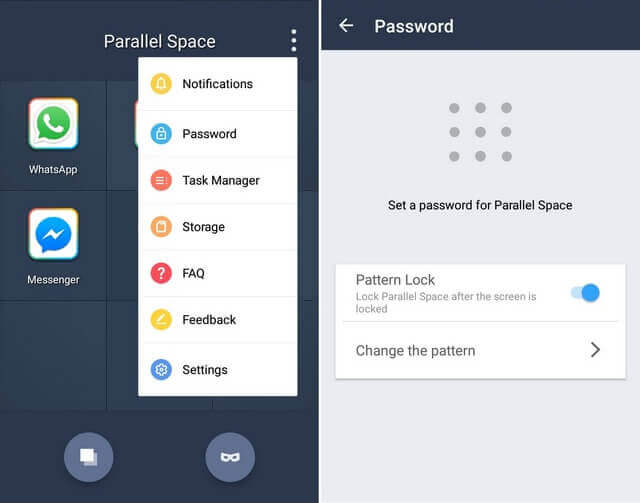 Phone boost. Since it’s basically an app virtualization engine, memory control is very important to have it run smoothly. Thus Parallel Space comes with a phone boost feature that will free your device’s memory both by terminating virtualized apps and regular ones. Just a tap and you’ll boost your phone’s performance. The app also includes a task manager to see other running apps and offers statistics for storage space so that you can keep performance under control. 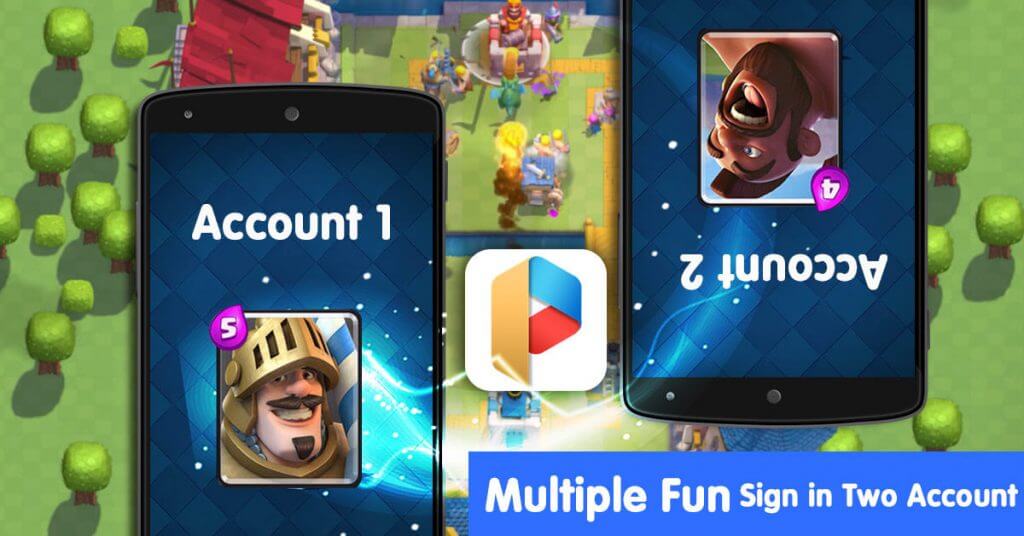 One thing to note about creating multiple accounts for social media (and others) is that some require phone verification. Those types of verifications where you enter your number and receive an SMS with a code that you must use to verify. If you are opening multiple accounts, be sure to use a different phone number for each account, and keep access at least until you receive the confirmation SMS. There are a lot of online places where you can “receive SMS online” and basically access a general phone number – however this number can be used for recovery purposes too so use it with caution. I’d still suggest using a dual-sim smartphone and just use 2 different sim cards as it is easier.

As far as Parallel Space, it does a tremendous job and I didn’t have any problems with any of the apps I cloned. This probably accounts for its 4.6 average rating on Google Play and close to 20,000,000 installs. The app was created by LBE Tech, a company still young (founded in July 2011) but already a leading mobile Internet app developer with various other Android apps such as LBE Permissions Manager, LBE Security Master, LBE Boost Master and currently has approximately 280 million mobile users around the world.

I highly recommend Parallel Space if you are in need to run multiple accounts for apps that otherwise don’t allow it. The app is free on Google Play, with some acceptable ads shown here and there.
[pb-app-box pname=’com.lbe.parallel.intl’ name=’Parallel Space’ theme=’light’ lang=’en’]