Sky by Ketchapp is a fun Pac-Man style game

Ketchapp is a French indie game studio (not a ketchup brand as you’d think) that had an explosive growth in the past 2 years since it was born. If you’ve played some Google Play games (or iOS for that matter) for sure you’ve tried their games. Their success came after they’ve ported the open-source 2048 game to the iOS appstore, but they’ve pretty much had success with every other game released. While some are influenced by other popular games (i.e. Flappy Bird), others are genuinely new ideas and ZigZag was one of them. Given that they have now over 45 games published on Android you can imagine their growth rate.

Sky is their latest release and resembles a bit with ZigZag, which is a good thing since that game was (and still is) awesome. In Sky though the main idea is this, you are a square that slides on a continuously generated maze that’s filled with obstacles. All you need to do is jump over those obstacles and collect as many coins as possible. When you hit one obstacle you die, there are no upgrades, no resurrections or anything, just die and start over. So clearly this creates a bit of frustration that’s borderline with addiction, which is afterall a good thing if you’re looking for a casual game. You can see my quick attempt at breaking a personal record here (which surprisingly I did):

The environment is material-design-like, with simplicity in mind and a focus on your character. After a while you’ll only see the maze that’s in front of you and nothing else. Your character does some neatly animated jumps over obstacles or smashes into little bits when the inevitable crash happens. If you’ve played Monument Valley you’ll recognize a tiny similarity, for me the long columns/towers were the trigger.

Once you start playing the game and get used to its style the addiction kicks in. The challenging and innovative part comes when your little square clones itself. There are some sort of cloning/teleportation green tents that, once you get in, will clone your character. While sometimes is helpful to have multiple clones on screen as if one dies you still got the other, most of the times this just adds to the difficulty of the game. It’s one thing to control 1 character and have it jump over blocks, and a totally different thing to control 2 or more at once given that each might have a different type of obstacle. It’s also the main thing in the game that will make you play over and over this game as I find it being the most challenging part in the game and what drives you mad enough to replay. So kudos to them for planting this “hook” in the game.

The game is fun and enjoyable, it’s something I’d replay if I had the chance to kill some time, but there are some things that I don’t like about it: 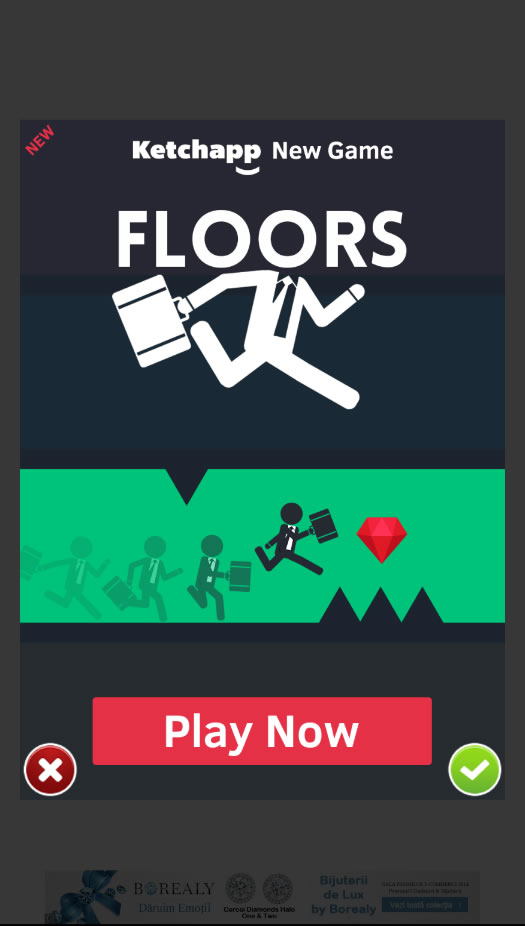 The ads you first see when starting the game.

Anyway, aside these inconveniences (that the dev maybe is working on fixing already) the game is pretty fun. You gather coins every “step you make” and right now the only way you can use those is by purchasing other characters. If you want to play with a Unicorn instead of the default square you’ll need to gather 5,000 coins and try your luck – characters are unlocked randomly from what I could test out. How tough is it to gather coins? Well, tough enough. Most of the times I got between 100-200 coins in a single run, so an average of 25 plays to get that kind of money. While it doesn’t show any IAP the game does let you watch videos to receive coin rewards and you get 900 coins each time you play a video.

Here are the features you should look up to in Sky:

I recommend Sky to everyone that likes to play casual games, even if those start ads annoyed me a bit. You get over those pretty fast by the time you encounter those cloning tents or accelerators. The pace is pretty fast and there’s no place for mistake in Sky which keeps you active and hooked onto the gameplay with the sole purpose of beating your own best score. Sure, for now you can’t do much with coins rather than unlocking new characters, but it is the first release so I’m sure other things will be included, especially since the game is one of the top new game releases and Ketchapp is constantly releasing updates and new games.