[Meet the Dev] A brief story of Huck It, the most realistic 3D freeriding game

This is the brief story that Mystic Media CEO Chris Silvestro shared with us regarding the release of their 3D freeriding game, Huck It, as part of our Meet the Devs series. If you are an Android developer you can submit your story as well.

BEING A PART OF THE FUTURE

A desire to be a part of the future led me to technology. The way I see it, the speed at which the world has accelerated since the advent of computers and smartphones is the closest thing to watching human evolution unfold within our lives.

I founded Mystic Media in 2001. Initially, we were focused on web development—this was long before the release of the first iPhone in 2007. We developed our first phone app in 2003, a Windows mobile app which recorded GPS coordinates onto an image when you took a picture on your phone. When you sent picture texts to people, they could see your location on Google Maps. Now, GPS data is embedded into the file itself, however, we created this far before GPS blew up. At the time, it was very advanced.

The biggest way in which our app development process has changed over the course of the last decade has been an increased emphasis on UI (user interface), debugging, and testing. The saturation of the app market over the past few years is no secret. If your app isn’t both visually appealing and functionally intuitive, it will not stand out in the sea of apps on Google Play and iTunes. We’ve increased the amount of functionality testing to ensure our apps are sleek, modern and instinctive. In the beginning, we were focused on the tech side, but now we’re making more polished apps on the whole. 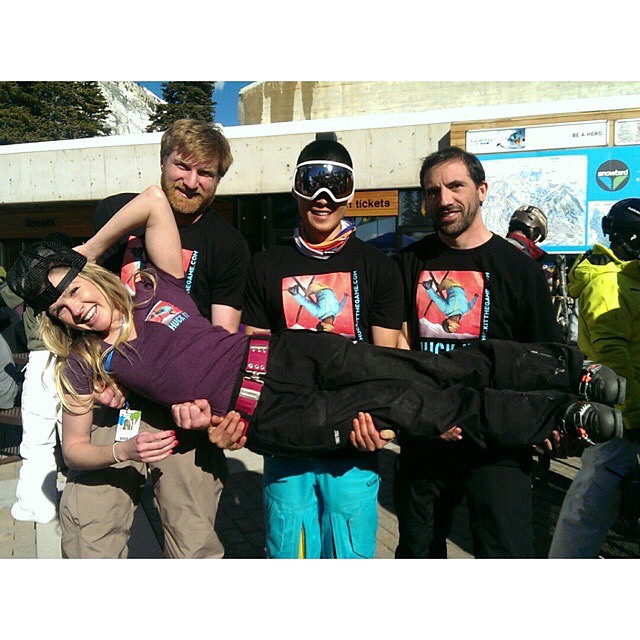 I’ve been skiing since I was in elementary school. I grew up in New England, moved out to Salt Lake City for college where I majored in Biology and Chemistry. These days, I ski almost everyday. Skiing and technology have always been my two biggest passions, so I merged them to create Huck It, a next generation realistic 3D freeride and racing ski game.

Of course, talking about making a mobile game is much easier than building one. It took about a three year turnaround from the genesis of the idea to the release of the app. Granted, during that time we were also consistently working on other apps for businesses. The first year was all conceptual: the marketing, the game development, the business plan. Once we had a clear idea of what we wanted, it took about a year and a half to get it off the ground.

The emphasis for Huck It has always been on realism. I grew up on fantasy-driven ski games like SSX Tricky, which had a great style, but we wanted Huck It to be more like a flight simulator for skiing. I wanted to capture the real thing. This was our biggest challenge. Our goal was to make the most realistic ski game on mobile platforms.

Over the course of our development process, Apple released three new models of the iPhone and five new iPads, while Android released a host of new phones and tablets. We were constantly on the fringe of maximizing the newest technology, and then the field stepped up. The release of the iPhone 5 was somewhat disruptive because Apple altered the screen dimensions, but the iPhone 6 came at the perfect time. The screen was bigger and the processing power was much stronger, making for a smoother run of the game. We had to get ahead of the game so that when this current wave of devices came out, we were ready.

After conceptualization, we hired a photographer to take photos of ski terrain. Next, we matched the photos up with topographic maps and GPS coordinates to draw out a 2D world. The major challenge with terrain was making it look realistic. It’s easy to compromise by making a smoother surface, but that’s not true to the reality of ski resorts. Our efforts to capture the realistic terrain made the levels much harder to program. We had animators draw 2D illustrations of each level, as well as the characters. We then took the 2D renderings, made them 3D, and put skeletons in the 3D models to rig them.

The next step was animation, which is a tedious process. We used a real professional skier as a model for all animations. We studied hundreds of photos and videos to understand in-air movements and went deep into the nitty gritty of ski physics. Both my expertise in skiing and my science background came in handy at this point. I was able to get specific and technical about where hand positions should be, where the legs should be, and all the intricate details. 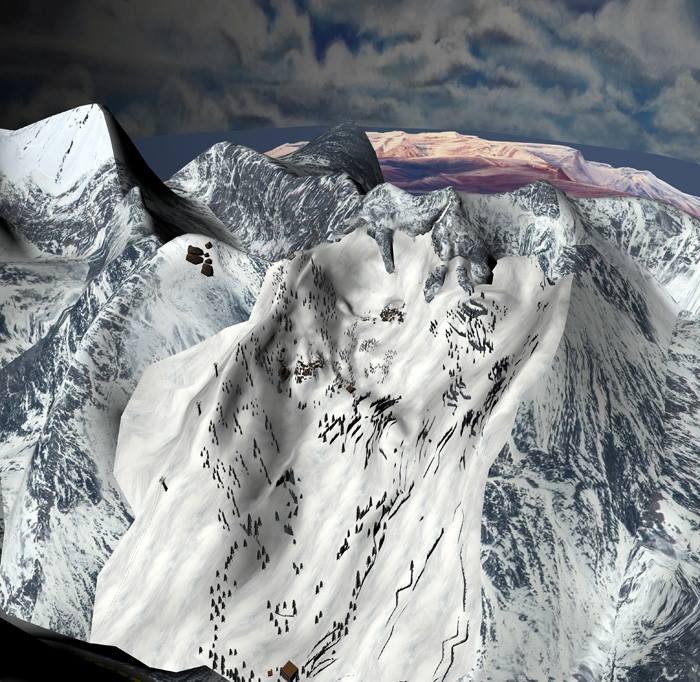 Huck It has the most realistic 3D depiction of an alpine resort.

Once the animations were done, we compiled everything, put it together and started testing gameplay and physics. Specifically, we worked on perfecting the gravity and camera angles— the gameplay, in-air, and crash cameras. It was similar to directing a film, having to figure out the most effective camera angle to show the action. We then created all sorts of debugging tools—switches which allowed us to adjust the settings on side-to-side turning, accelerations, joystick sensitivity, wind, wind resistance, and map coordinates so if there was a glitch at a specific coordinate on the map, we could fix it. Essentially every variable on the physics level needed a debugging tool. We created each of the different styles of skis available in the ski shop using debugging tools to help determine how to make each ski react as it would in reality.

Over the course of six months, we created about 40 different versions of the game from debugging, putting in about 2,000 hours for testing. We moved the trees around, modified the obstacles, honed the movement and jump animations, dialed in race mode, and refined the acceleration factors and gravity to make it all feel real. We hired 55 game testers who had never seen the game before, gave them a comprehensive feedback document with 50 questions, then modified the game based on their comments.

Believe it or not, one of the most annoying, unexpected challenges was the tree placement. The trees really messed with the frame rate. Originally, we had the game set at 60 FPS, but it was hurting many of the devices, so we locked it in at 30 FPS to make for the smoothest experience without any loss of quality.

Testing allowed us to go to painstaking measures to ensure the iOS and Android experience was fluid across all devices.

One of the last steps of the project was the sound. Rather than buy stock sounds, we handled this process in-house. From the in-game and menu screen music, to the wind and the ski turn sound effects, every aural factor in the game was custom built internally.

Huck It was a huge challenge, and extremely rewarding. This is the first game we’ve developed in the Mystic Media name. We’re a software company often behind-the-scenes of the apps we develop for other businesses. Huck It gave us an opportunity to innovate and push devices to the limit: the gyroscope, screen resolution, processing power, controls. We got intimate with the hardware.

The best advice which I could give to young app developers is to know what you want. This is a long process with a lot of ins and outs. Having a clear vision of your project will not only make every aspect of the process more fluid, it will be even more satiating when your vision is realized.

Chris Silvestro is the CEO of Mystic Media, a web and software development company based in Salt Lake City, Utah. Huck It is their first game, available now on Google Play and iTunes. Visit huckitthegame.com for more information.

Below is a short interview with Chris on various topics related to Android:

Q: Android, iOS or Windows 8, which one you prefer from a development point of view and why?

A: I prefer iOS because of both their quality control and the lack of device fragmentation since you’re dealing with one phone manufacturer. With Android, there are so many devices from so many manufacturers, it’s a lot more difficult to optimize for every single Android phone available.

Q: How long it usually takes from the initial app idea until the first public release?

A: Usually six months, depending upon the complexity of the app. With Huck It, it was different. It took about 3 years.

Q: How do you monetize your apps? Do you think it’s difficult to make money as a developer?

A: Freemium… We monetize our apps through in-app purchases and mobile ad networks. It’s difficult to make money from apps if you don’t have the users, so the main focus is getting the user base to play it. Once you have a core following, the monetization process is fairly simple. We also built a cloud-based affiliate management system that allows us to go in and add new advertisers on the fly, in addition to Google’s AdMob. The app totally syncs with the website, user registration, leaderboard, advertisers, social, and sponsors. We can also change the credits and the help menu.

Q: With hundreds of thousands of apps in the Google Play store, how do you make people aware of your apps?

Q: What has your experience been like working with Google’s Android tools (SDK, guidelines, …)?

A: Good, though a little convoluted. On the whole, Android’s a lot more flexible than iOS so we’re happy with Android.

Q: What can Android do to improve (from a technical and marketing point-of-view)?

Q: What are your favorite apps?

A: Every app that I’ve built.

A: Clear specifications in terms of device type, screen resolution, and features. it’s vital to nail down your specs before starting any development.

If you want to share your thoughts with others just see the Write for Us page on how you can contribute.