Board games are one of the oldest methods of recreation ever invented. ‘Senet’ was the name of a surprisingly complex board game invented by the Egyptians and archaeologists place it around 3500 BC. That’s well over 5000 years ago and board games are here to stay, even with the advancement of technology they’re still one of the most popular form of social recreations. You’ve played a board game for sure, be it in the form of Chess, Tic-tac-toe or the latest Game of Thrones game. A board game is basically any game that is played with items placed on a marked surface (board) and involves obeying some rules by a group of players. They can have complex strategies behind them and luck only influences in a small manner the result of the game. The theme of a board game can be abstract (i.e. ‘chess’), it can be a representation of movie/video game/book (i.e. ‘Dungeons & Dragons’, ‘Game of Thrones’) or ultimately they can represent real-life situations (i.e. ‘Monopoly’).

One of the most intriguing real-life situations that can be represented in board games is the presidential elections. Imagine playing a board game as Obama (I giggle thinking how this blog post already triggered an alert in Prism and an NSA employee just became my newest reader) against Mitt Romney with the purpose of winning the presidential elections in the United States. That’s powerful and fun in the same time and you can play this board game on your smartphone or tablet by installing ‘Prez Games’ for Android. Developed by Flexibendi, the goal in ‘Prez Games’ is to be the first player that reaches 270 electoral votes and become the president.

Why 270 votes? Well, here’s a little overview on how presidential elections take place in the US (it helps a bit in understanding the game):

This is why in ‘Prez Games’ the goal is to win the votes from 270 states to defeat your contra-candidate. It is a turn-based game that’s played on a virtual board. It starts with choosing a type of game, Solo vs the AI or Online vs other players. Once you’ve decided that, it’s time to pick a party: Democrats or Republicans. For each party there are a certain number of possible presidents, 25 candidates in total. Yes, you can play as Barack Obama, Mitt Romney, Hillary/Bill Clinton and so on, even Sarah Palin for God’s sake. The game design is excellent from this point of view, as each candidate is actually a caricature/cartoon version of the real person, thus quite enjoyable. You can see a video tutorial below where I try to beat my AI contra-candidate…unsuccessfully:

At first you can play only with one candidate from each party, but as the game progresses and you get some money (Bendibucks they’re called) you can unlock more candidates. Each candidate is not there only for eye-candy, they also have individual powers/abilities which can be activated during a game by using a number of power items. Here’s an overview on what you can do when the actual round starts:

I told you, the game has complex rules as any recent board game that respect itself allowing you to develop your own strategies. It will take a bit to learn the rules but the game provides a separate help section and also has a tutorial play mode – if you start that you’ll get hint bubbles all throughout the game that will give you more details on what you can do and what an item does. ‘Prez games’ is very thorough in terms of help items and explanations and I recommend the first gameplays to be the tutorial type.

There aren’t many options to set, only enabling the music and sound effects, music which I found to be very good (reminiscent of ‘Bonnie Tyler’ tracks). With ‘Prez Games’ you also have your own profile that shows statistics on how many games you’ve won, your achievements, your score and how much Bendibucks you have in your treasury.
After a few solo games if you know enough you can challenge other online players and compete against them. 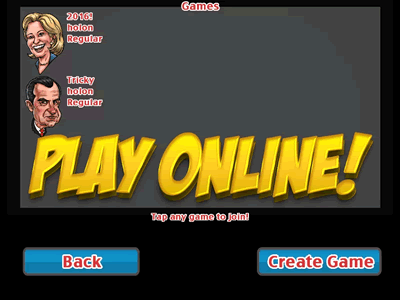 Play online against other real players

The game is free and only displays advertisements at the bottom of the screen. They also use Tapjoy (reward system) and you can get this way extra Bendibucks, the in-game currency you can use to unlock other candidates with better super-powers. If you’re curious what is the super power that Sarah Palin possesses, I invite you to download and install the game.

You can read more about the game from its official webpage at http://www.prezgames.com/ where the developer also announces new candidate additions. To download the game visit its Google Play webpage: Download Prez Games.