You never forget a game that made history. I remember when I first discovered an Arcade machine for SpaceInvaders, the first shoot ‘em up game I played. It was a game room close to my school and for months to come a machine like the one below was where all my lunch money went to: 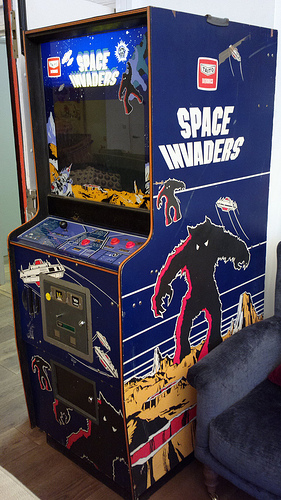 But it was all worth it, the feeling shooting those alien ships fast enough before they reached the bunkers, the fast pace in upper levels, all added up to a memorable experience. This game wasn’t the first to introduce the genre of “shoot ‘em up” but was one of the most popular games of the 1980s. If you’ve played a few games in your time you recognize the style, it’s that genre where you have to fight a large number of enemies by shooting at them while dodging their attacks. Reaction time was the most important part, as with Arcade games there were no saves, when you died you had to start over. Things evolved and even if some critics say this genre should refer only to the types of games that introduced the gameplay in the 80s, with the introduction of tablet/smartphone games everything is up for shooting, even chicken.

If you’re more ‘recent’ on this world and don’t recall SpaceInvaders, there’s a chance you remember about Crazy Chicken. This game was the most popular game in Germany in the year 2000 and was highly played in other countries as well. This name was only a translation, as the original one was called Moorhuhn, which in German is derived from ‘willow grouses’, a type of bird. Funny enough the game was created initially as an advertisement campaign for whisky. You see, in England, 12 August marks the start of the shooting season for Grouse (a bird) and that day is called ‘The Glorious Twelfth’, a day that for those poor birds seems like the Apocalypse. As a way to imitate that day, the advertising agency called ‘Art Department’ created a game where you had to point and shoot birds as fast as possible in a cartoon-like environment. It wasn’t intended for distribution, instead they dressed up models as hunters and placed them in bars and they would approach people with a laptop and provoke them into playing. The game was pirated and made its way ‘onto the Internets’ where it was hugely popular and thus the focus shifted into online distribution as well.

In fact it was that popular to the point where businesses were affected as employees would waste hours playing the game. Unfortunately for businesses, the introduction of smartphones and tablets opened up a market of millions of portable games. ‘Invaders from Antarctica’ is one of those games that follows the same idea as in ‘Crazy Chicken’, where in under 90 seconds you have to shoot as many enemies as possible.

‘Invaders from Antarctica’ is a shoot ‘em up game where your goal is to protect a small village from New Zealand from hordes of paratroopers. These evil forces had an underground base in Antarctica and once they equipped themselves with propeller backpacks they got onto their spaceships and attacked New Zealand with their Walter guns. Luckily enough, you are there to protect them.

The game’s design fits nicely with the action. For now only one type of scenery is available, that of New Zealand, and the images are brightly colored and vivid to give a nice touch. It’s like playing in a cartoon, even the villain characters are designed in a fun way. There’s also flying saucers, background scenery (i.e. a mill) and even an occasional poor sheep that becomes a victim in the crossfire.

As for the gameplay, there are 3 types of actions you can do in the game: tap to shoot is the primarily one (just tap anywhere on the screen to shoot), tilt your phone/tablet to move between the screens (I counted 4 different screens) and finally recharge your weapon by shaking the device (although you can recharge by tapping on the gun). The game currently has only 8 levels, but more will follow. You don’t have many options to swipe through, when the game starts you can use only 1 of the total of 4 guns available, but as you progress through the game you can upgrade the gun to a more powerful one. Each level lasts for 90 seconds and when it starts you’re able to see clearly the time remaining, your current score, how many bullets you have left and of course all the hordes of evil flying men. If the first level is easy, things get very crowded fast as the villains will fly from all directions and you have to shoot them fast.

Aside shooting the villains you have to shoot at the flying saucers as well, because those contain bonuses. You can this way get bonuses that double your score, provide unlimited ammo, contain bombs that destroy all the enemies on the screen and so on. The game moves at a very fast pace to the point where after 4 levels my right hand was starting to feel sore. You can see the game in action in the video below:

As you can see, at the end of each level you get a star rating, aside your score points, based on your accuracy. This is important, as you cannot start shooting randomly, you have to aim right and shoot to get at least one enemy otherwise it will count as a miss. While playing I found it difficult to recharge the gun by shaking, so instead with my left hand I would just tap on the gun to get more ammo. Some levels were so dynamic that instead of tilting between various screens I just stayed on a single one and continued shooting. Here are some of the features of ‘Invaders from Antarctica’:

I had fun playing ‘Invaders from Antarctica’ and even if there are few levels you can always replay the ones where you didn’t get a 3-star rating until new updates with more levels will follow. Since the main action is not difficult it’s a game for almost any age.

The main website for this game is still under construction but you can go ahead and try the game (while it’s still free) yourself by downloading it from Google Play: Download Invaders from Antarctica