Sometime ago in our history someone thought of inventing a card game revolving around the number 21. Don’t know why 21 and always thought it had something to do with Americans and their ‘you cannot buy drinks under 21’ policy. However it seems that the first written reference of the game is in a short tale called ‘Rinconete y Cortadillo’ written by ‘Don Quixote’ himself (actually its author, Miguel de Cervantes). In this novel, which you can read here if you’re Spanish is not as rusty as mine, he refers to a couple that was cheating at a game called ‘ventiuna’ (which means 21 in Spanish and close to the Italian name for the same number as well – ‘venti uno’) which basically is the precursor of BlackJack. Written sometime around 1601, you can imagine how old the game is.

The game didn’t become too popular until it reached the heaven of casino games, United States. It was introduced as ‘21’, its original name, but soon casinos started to offer 10-to-1 bonuses if a player had the Ace of spades and a Jack of clubs or spades (called the black Jack). This was a very large bonus, as for any $1 bet, you’d get back $10 if you were lucky enough to have this hand. The game thus increased in popularity and its name changed inevitably to the modern BlackJack, now the most widely-played casino game in the world.

I’ve never been too proficient at playing cards games mainly because I lacked the ‘practical intelligence’ of figuring out how many Aces or 7’s are left, or who knows what other important cards for a given game. I mostly viewed card games just as you view any other game, a fun way to spend some time, not an elaborate strategy to practice math and calculate probabilities. That’s why my vision of BlackJack was that of drunk Rachel from the popular ‘Friends’ TV show (you can watch the first 20 seconds of the video below to see what I mean):

‘Hit me, hit me, hit me…’ that was my basic knowledge of the game. This changed however after I saw the movie ‘21’ in which one of my favorite actors stars, Kevin Spacey, and some young smart pricks. That’s when my whole view of the game changed and I wanted to become a ‘super-smart-genius-card-counting-cheater’. So I read about strategies, how to count cards, how to keep cool and all that I thought would make me excel in BlackJack, only to realize that I still suck at it several months later after losing several dollars in an online game. Lesson learned, I won’t play BlackJack for money again, but this doesn’t mean I don’t play it at all, I still enjoy the occasional game as long as I don’t play it for real money. And what a better way to play the game than from the comfort of your Android smartphone, with a multitude of BlackJack simulators available. One such game is ‘BlackJack Casino Card Game’, a free game developed by Jaxily (you can see other games from the same developer here).

The game’s is designed to be easily playable thus when you start it you’re seeing directly the play table and are ready to start the game. No settings to change or things to configure, no accounts to be created, you can start playing right away. Simplicity is good, it gives you upfront what you came for, a BlackJack game. A game starts with bets which you can place by tapping on the chips (casino tokens) at the bottom of your screen. You can bet as low as $5 or as high as $100 with a single tap, but your total bet can be up to the amount you have when the game starts. It’s recommended to start low with bets to avoid losing all your money before even understanding the game. 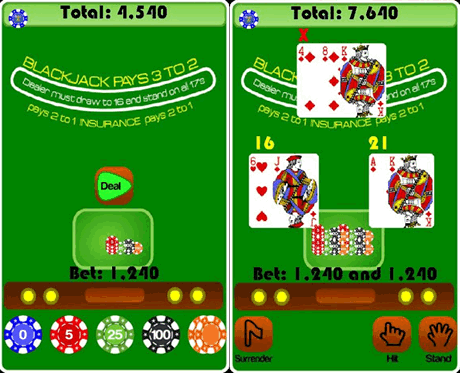 Simple gamplay for BlackJack: first, place your bets, second get hit or stand.

After the bets are placed you can tap on the ‘Deal’ button to receive your first 2 cards. Dealer gets 2 (one of which is hidden), you get two and decide what to do next: Hit, Stand, Split, Double or Surrender. I’ll explain these actions a bit later but at this point is important to understand the basic rules of BlackJack:

With these rules in mind you continue playing the game with the sole purpose of defeating the dealer. Sure you’ll occasionally be lucky enough to draw an Ace and a face card right from the first hand (getting 21 wins you the game), but most of the times you have to consider some strategies to win. One that helped me is the one below, with the mention that a ‘soft’ hand is when you hold an Ace, and a ‘hard’ hand is when you don’t have an Ace or a pair: 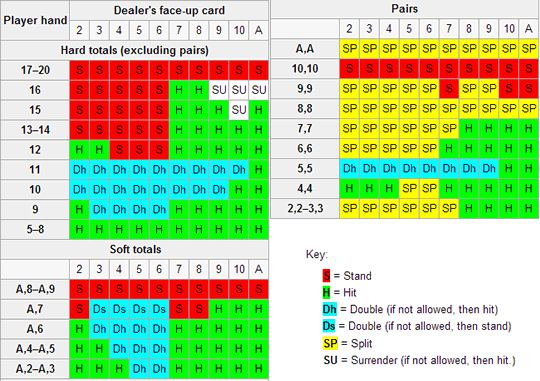 BlackJack strategy thanks to the common knowledge of WikiPedia.

If you follow the strategy above (thanks to Wikipedia) your chances at winning are higher than playing solely based on luck. Not that it accounts for anything but fun, though maybe some can see this BlackJack game as a trainer for the real thing. If you do train and end up winning some real money I wouldn’t say no to a chip mailed to me ;).

Throughout the game you’ll hear some audio guidance, a voice that will tell you that bets need to be placed, who won and other useful information. That’s one of the settings that can be changed in the game, just tap on your phone’s Menu button and you’ll see in there the first icon being the ‘Mute’ one – though to be honest I like the voice and appreciate the help. Other few options in this quick menu are those of showing more Information about the game (will show a pop-up with details about the game), connecting via HeyZap (social network for gamers), check the HighScores (you’ll see how rich is, at least digitally, the player at the top) and your Name that will be shared along with your score in the leaderboard. You can see the game in action in the video below (actually me losing graciously):

There’s one important aspect of the game, the actions that you get when the cards start dealing. As mentioned above you can tap on hit, stand, double, split or surrender. Depending on the situation, this is what each of those actions do:

This game is intended for people that like playing casino games and have a special interest in BlackJack. As with all things digital it’s not like the real thing because most of the times you don’t experience the same emotions as being in a casino, but I prefer this as a fun game practice rather than spend a ridiculous amount of real money and risk of losing them (yeah, I’m a pessimist). For this purpose, of practicing and having fun with a BlackJack card game, this Android version works wonders.

The game is free and you can stay up to date with its development by visiting the official website of Jaxily. You can also download it from Google Play here: Download BlackJack.