I was around ten years old when I received one of my first portable game devices. It was rectangular, had a small screen, a few buttons and on its back the shape was curved a bit just to allow your fingers to fit in there and hold the device better. There was a single type of game in it, with bricks organized in various shapes and always each object containing only four bricks. 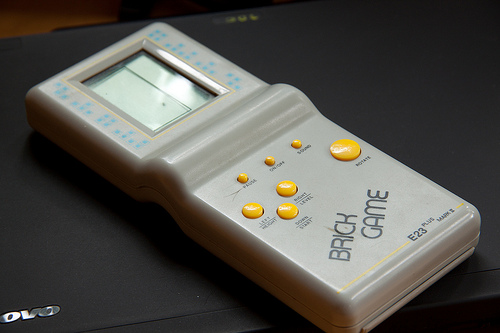 An old Brick Game with Tetris on it.

Even if what I had was a ripoff from the original, you probably recognized that the game was ‘Tetris’ as to this day it still is one of the most popular games of all times. I remember that I played it until the buttons were pushed so deep in the game that you had to press at least 5 times to see some movement. Those were the times…

‘Tetris’ was invented in 1984 by Alexey Pajitnov, a Russian academician who, as a tennis fan, named the game based on a combination of the word ‘tetromino’ (meaning a geometric shape with four connected squares, that’s how many bricks an element had) and the ‘is’ suffix from tennis. The main beneficiary of the game was the Soviet government though, who held the rights until 1996 when these were reverted back to its inventor – it’s interesting to mention that until the returning of the rights Alexey didn’t earn money from its invention.

But ‘Tetris’ is just a game, right, I mean you play it to have fun and that’s it? Well not exactly, according to a paper published by Dr. Richard Haier, playing ‘Tetris’ for a long period of time will result in more efficient brain activity. Measuring the amount of glucose used when playing the game for the first time as a comparison base, he discovered that after players became more proficient the amount of glucose reduced thus the brain was more efficient. The conclusion of this paper was that playing the game even in moderate amounts (say half an hour for 3 months) improves your general cognitive processes and thickness of your cerebral cortex. It’s as efficient in improving your critical thinking as doing Math problems for that long, though you tell me which one is more fun, doing Math or playing ‘Tetris’?

I figure that playing was your choice too, and if you have a smartphone you’re in luck as there are a lot of ‘Tetris’ variants for Android devices. One of them is ‘Magic Blocks 3D’, a game developed by Timur Gudkov, which respects the gameplay of the original ‘Tetris’ game and improves it a bit by offering 3D perspectives and more complex objects.

‘Magic Blocks 3D’ has the structure of the regular ‘Tetris’ game if you take into consideration the rectangular shape of the play screen and the objects. The main difference is that in it the objects are 3D not bidimensional as in the classic game. The gameplay is rather similar, as when the game starts objects start falling (initially slow) from the top of the screen and using the 5 control buttons you have to arrange the objects to fill lines and clear them. If the original Tetris only has tetrominos (objects with 4 squares), in ‘Magic Blocks’ you get 2 more play modes as there are also pentominos (5 square objects) and hexominos (6 square objects). You choose one of the 3 playmodes when the game loads, obviously the first one is the easiest.

Each of the falling objects can be rotated by 90-degree units and you have to think fast enough how to place them so that you have as few gaps as possible in the horizontal lines at the bottom. When a line doesn’t have any gaps it is cleared out and your score increases. After you’ve cleared a certain number of lines, the speed of the game will increase thus you’ll have to act even faster. The gameplay sounds infinite but due to the fact that the speed continues to increase, you’ll finally lose as objects will stack up to the point where there’s no more space for new ones to come. The video below shows briefly the gameplay of ‘Magic Blocks 3D’.

My favorite shape in the game is the I one, as using it you can clear the most number of lines at once (4, 5 or 6 depending on the play mode). The least favorite one is the ‘Z’ as no matter how you put it in you’ll have gaps (though I’m not a fan of the ‘S’ shape either). Here are some of the features of ‘Magic Blocks 3D’:

‘Magic Blocks 3D’ is easy to play (no matter if you played ‘Tetris’ before or not), fun and nonetheless completely free. It’s focused on the game itself and you’ll see that in its minimalistic design approach, a good thing since it doesn’t distract you with unnecessary gimmicks. You can download the game from Google Play here: Download Magic Blocks 3D.