Easter eggs are eggs (duh!) often dyed and painted that are given during the traditional Easter celebration. As Christians celebrate the resurrection of Jesus from his tomb, Easter eggs are a symbol of a tombstone which is ‘lifted’ and life emerges (i.e. the chick) – that’s the reasoning they’ve been used for thousands of years. There’s a discussion here on who started this habit as painted eggs have been found in Egypt dating 60.000 years ago, long before Jesus, but that’s outside the purpose of this post.

My son (now almost 3) enjoyed playing with Easter eggs since he was almost 1 year old. He loves especially the Easter egg hunt game, where basically we hide some of the eggs throughout the house and he has to find them. There’s a slight change in here, as instead of hiding regular boiled and painted chicken eggs we hide Kinder Surprise eggs. Now, if you’re from the US you probably don’t know what I’m talking about since those are banned, but in Europe these are a huge hit among kids. A Kinder egg has a chocolate coating and inside there’s a box with toy parts – kids open the egg and the box, get out the parts and assemble them to have a regular toy.

I mentioned these are banned from the US as there’s a regulation that says in summary that you cannot have non-edible objects (i.e. the box with toy parts) inside something eatable – apparently it might confuse children into eating the quite big box inside too. The eggs were introduced 40 years ago by the Italian company Ferrero and until now there have been 6 deaths reported… you draw the conclusion how dangerous they are.

Anyway, my kid loves those so much the chocolate doesn’t even matter, he just wants to get to the surprise and assemble the toy. He’s not interested in eating anything, he just likes to open the egg and find a surprise inside. This is common for toddlers (children 1-3 years old) to get a lot of joy from uncovering surprises enclosed in an egg, something that you can emulate through an Android app as well, Egg Popper.

Egg Popper is a game developed by Jaxily (I’ve covered 2 more apps from them here and here) that’s targeted for toddlers and small children. For an adult it will seem dull but watching my kid play it for a bit I can tell you that kids like popping eggs and finding surprises. 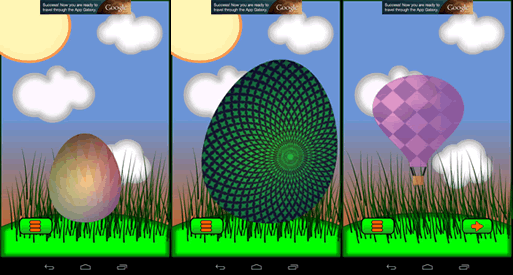 Gameplay in egg popper, tap on eggs until they break

Egg Popper is very simple and designed with children in mind. The graphics look cartoon-like, the sound effects are funny, all to create a play environment enjoyable for children. The functionality is plain, once the game is started an egg will pop-up on the screen and by tapping on the egg it will increase in size several times until it will break revealing a surprise. Each egg that is displayed has a different pattern (they’re truly painted as Easter eggs) and random surprises are enclosed. Every interaction with the egg or the surprise inside will be accompanied by a funny sound effect that make kids giggle.

There are no levels, it’s just the same continuous gameplay where a randomly painted egg shows up, you tap on it until it breaks and reveals a random toy, then tap on the next icon to have another egg shown and so on. I can see it being expanded for bigger kids by displaying increasing numbers of eggs, but that’s up to the developer. You can watch below a video that shows how the game looks like and how it is played:

Egg Popper has the following features:

Egg Popper is that type of game that you can load on your smartphone and pass it to your toddler when doing shopping in a supermarket to avoid their octopus-like hands grabbing items from the shelves (happens to me all the time if I don’t give my kid a distraction). Or for those situations when you have to wait in the doctor’s office, or any other place where waiting more than 10 minutes is involved, as above that time kids go crazy :).