If Super Mario was a Fat Pig on your Android…

In 1985 Nintendo released Super Mario Bros, a game that would become world’s second most popular game of all times (to date, on the first place being Wii Sports). It was a sequel where 2 brothers, Mario and Luigi, traveled through the Mushroom Kingdom to rescue Princess Toadstool from the evil Bowser. I discovered the game in 1987 and along with a friend we had many sleepless nights playing it near perfection. 26 years later I still remember the ‘tricks’ learned on different levels and as I, millions others still enjoy the game. The popularity of Super Mario is still world renowned as with every new console release Nintendo also released a newer version of the game. Arcade nostalgics such as me still prefer the old version of the game that can be called a legacy.

In light of today’s game I thought what would’ve happened if Super Mario was instead a pig, would it still enjoy the same popularity? Chances are it would’ve, as I was into the game for its gameplay rather than the story. And it’s not like people don’t enjoy pigs, the famous company Rovio released a while back ‘Bad Piggies’, a game where the player enjoys it from the Pig’s point of view. Judging by its 50 million+ installs per month, lots of people enjoy pig games. Growing up my grandparents ‘played’ another game with their real pig called ‘fatten-the-pig’ for 1 year and then, well, let’s say the fat was transferred.

‘Fat Pig’ is a free game for Android devices developed by Jaxily, a company with almost 60 games published so far in Google Play’s store. It’s free to play and has somehow that feeling of an Arcade game where your character jumps and collects items while avoiding obstacles – the Mario fan in me felt a similarity, but maybe it’s my own obsession.

In ‘Fat Pig’ you control a pig and your goal is to eat as many cupcakes as possible, while avoiding to fall into the water or black holes. The game is structured in 20 levels and is targeted mainly for kids, though waiting in line at a doctor’s office might be good as a time-waster for adults as well. 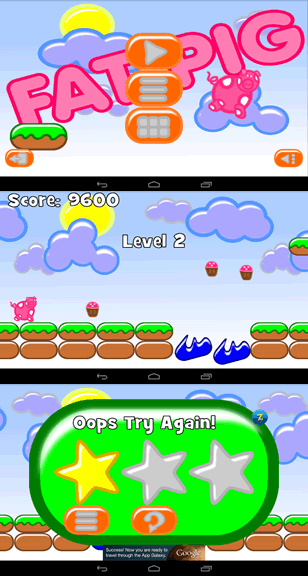 You start the game, collect cupcakes and get a start rating at the end of a level.

Here’s an overview on how the game is played and what features it offers:

You can download the game from Google Play’s store here: Download Fat Pig
If your kids enjoy this game, you can browse to the other selections of games developed by Jaxily, as there are quite a few targeting the younger ones: Jaxily on Google Play.