Bible Book Order, play a game and learn the books of the Bible

It’s a first time for everything here on AndroidB, and today we’re taking a look at the first religious game listed on the site called Bible Book Order.

Before delving into the game, some short introductions are needed for those that aren’t very knowledgeable in regards to religion. The Christian Bible is divided into two major parts, the Old Testament and the New Testament. The New Testament has a biblical canon, meaning a list of books that are sacred and are a constituent part of the Bible. It contains 27 books that are listed in the same particular order for the Catholic, Eastern Orthodox, Protestant and most Oriental Orthodox religious groups.

So how well do you know the order of the books in the New Testament? Bible Book Order is a game that puts your religious knowledge to the test. It’s a very simple game where you have to choose between two options when asked which of the two presented books was first in the New Testament. You have a number of seconds during which you will receive a set of two books from the Bible and you have to choose the correct order in which those books are included in the Bible. If during the given time you have 10 correct answers, you progress to the next round of the game. And as the game progresses, difficulty increases too as you’ll have less time to make your pick and the books shown will be more difficult to put into order. 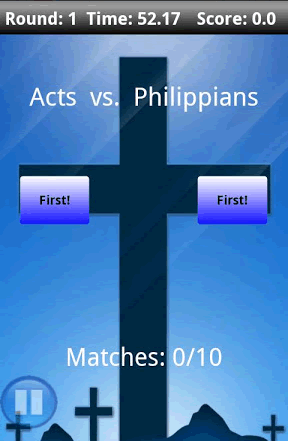 It’s simple to play, just tap on the First button under which book you know to be first in the Bible

Bible Book Order has three playing modes, easy, medium and hard, my guess is that you’ll need to start with the easy level and see how well you stand before choosing a different level. Depending on how well you do, you’ll also receive points and thus keep track of how well you’re doing by taking a look at the local high scores. 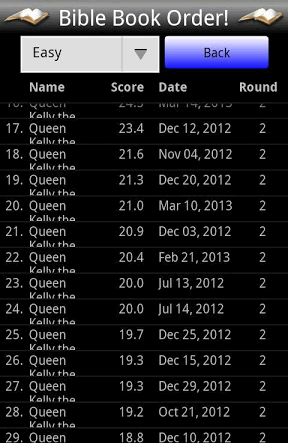 The scores for Bible Book Order are stored locally

We’ve discussed with the developer of Bible Book Order and we share with you the short interview to better understand the app and know the plans for its development:

A: I’m an Electrical Engineer by trade for the past 14 years and I taught myself java as a hobby.

A: Well, I’m embarrassed to say, but it took me about 12 months until the first public release. That time wasn’t continuous, however. There were several times where I would let it sit for weeks at a time for whatever reason.

A: This is my first app and it only targets Android. I hope to develop other apps for Android and then venture off into iOS.

A: Mostly word of mouth through friends and some promotion on websites.

A: Right now, the app only has the action of picking which Bible book is first. I would like to add some bonus levels every three levels or so and some “challenge” levels that would challenge the user with different knowledge than just the order of the books of the Bible.

A: I can’t think of any in particular that have been a direct inspiration. However, when I read of success stories of people making a living off of developing apps, that is very inspiring to me. I have used different apps just for ideas of how the user interface is laid out. One such app that I have used that was mentioned in one of my gaming books is Abduction.

A: My first piece of advice would be to go through a book that walks you through some of the basic features of Android and the process of creating an app. There are hundreds of tutorials out there, but there’s nothing like having a hard-copy to reference. From there, you can search on the internet to accomplish what you need to accomplish not covered in the book. My second piece of advice would be to stick with it. There’ll be many times when you feel like not working on it, but stick with it till the end. You’ll be happy you did.