Hey Ninja, a free jump and slice game for Android

Hey Ninja is a free game for Android that really puts your gaming skills to the test. In the game you control a nicely designed Ninja who can do two things: jump over obstacles and slice enemies and chests. At first I thought that the game would be very easy to play, however you need some training before you can master the controls. And even when the controls are under your … control, you still need to go through the 12 levels that increase exponentially in difficulty. So the challenging part of the game is there and is very well defined. Back to the controls, this is how you play the game:

Sounds easy, right? Well the problem is that most of those 3 actions presented above have to be done in the same time and that is difficult to do. You have to practice a bit before achieving mastery at using the controls of the game and once you know how to do that you’ll have to go through the difficult levels.
The story behind the game is simple, you control your ninja as presented above and have to complete levels that increase in difficulty. Here’s a brief presentation of the gameplay:

Hey Ninja is a fun adventure that you can play either by going through all the 12 levels or by choosing the endless game mode. It’s quite popular on Google Play’s store, however I’ll never understand why some users complain is difficult to play, there are games that are fun just because they’re not as easy as others. You can get a feel on how the game is played by watching this video:

Hey Ninja is free to play however it is monetized through StartApp, which means that when you first start it you’ll get a License Agreement that sounds like this: “We have put a lot of time and thought into this application and hope you will enjoy using it. In order to keep the App 100% free, it includes a Monetization and Advertising platform by StartApp. You will receive the following: A search icon on your home screen to perform searches, a bookmark is added to your browser, your browser homepage will change”. If you Accept the agreement those changes mentioned will happen, however you can opt-out of this by tapping on Decline and you’ll still be able to play the game. 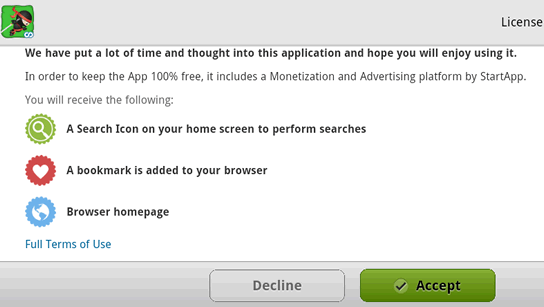 The EULA for Hey Ninja that you can decline and still play the game.

To download the app visit its page on Google Play and send it to your device: Download Hey Ninja.