[Update]: The developer announced a new version with 2 major improvements: the red and green colors are now less bright and the icon sizes on the wrapped sides were changed so that the game looks better on all screens now. Furthermore, the app is completely free until March 8, 2013 (with all the features of the PRO version available).

Tic-Tac-Toe is another one of those games that remind me of my childhood. Being in the math class it was almost impossible not to start a tic tac toe game when you had access to all those math-paper pages divided into neat little squares. Tic tac toe and Battleship were the most popular games.

Rap-a-Tic-Tac-Toe, as the name suggests, is a TTT game for Android. While at first I thought it was a Tic-Tac-Toe game with a Rap soundtrack, its first word is actually the shortened version of “Wrap”. This game reinvents the TTT play-mode and solve one of problems that the classic game has – it ended too many times in a tie between the players. To be statistically accurate, if for a classic game of Tic-Tac-Toe there are about 255,168 possible games, out of all of those 46,080 games will result in a tie (source). That means almost one in 5 games will be a tie.

Not anymore though, as Rap-a-Tic-Tac-Toe’s introduces a new twist to the classic TTT game, instead of having only the 3 x 3 cells for winning combinations, it introduces 12 more cells by wrapping (folding) the 4 edges of the board (horizontally and vertically). These 4 extra lines of cells cannot be marked directly, as they are automatically filled when you mark a regular cell. Just look at the image below to see the correlation between the cells: 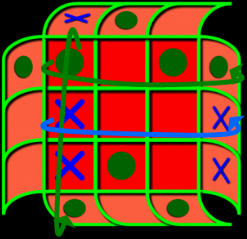 This increases exponentially the possibility of a winning game instead of a tie, as you don’t have only 9 cells to keep track of, but you have a total of 21 cells now. And you can win not only by creating a horizontal/vertical/diagonal match with the 3×3 cells, but also with the additional cells as you can see pictured below: 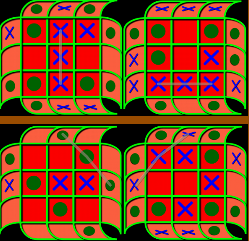 As soon as you play your first Rap-a-Tic-Tac-Toe game you’ll understand how the game is played. You can also watch the video below for a review of the game:

The basic version of the game is free to play and there’s also a Pro version that for 99 cents will add some neat options:

The developer of Rap-a-Tic-Tac-Toe agreed to answer some questions for our readers, so below is the information shared with us.

A: I am an R&D engineer with a PhD in Electrical Engineering with a day job at a multinational firm. I started learning Java/Android as a hobby last year with the ultimate aim of starting to write apps as a pass time (and possibly make some money!).

Q: How did you come with the idea to create Rap-a-Tic-Tac-Toe, what inspired you?

A: I thought the best way to learn Android is to develop an app in the process. So I started thinking of simple apps (that haven’t been done already) to make. I was playing Tic Tac Toe one day and it struck me that this wrapping idea (kind of an engineering concept) would make the game more interesting without extending the play area of the board (like the 4 in a row Tic Tac Toe or other variants that extend the play area). Also once I implemented the game and started getting a hang of it, I added options (like wildcard, playing blind, change number of wrapping sides, …) to make it more challenging and interesting.

A: Since I have a day job I was doing this app development on the side whenever I had spare time. I was new to Java and Android, so my learning curve started last summer. If I had dedicated myself fully to develop this app it would have probably taken ~ a month to develop.

A: This is my first app that targets only the Android market. Plan on extending it to IOS and Windows soon.

Q: With hundred of thousand of apps in the appstore, how do you make people aware of your apps?

A: Good question – wish I knew the answer! Have tried promoting it in sites (like yours) based on advice from the internet. I wish Google would have a section for just released apps that viewers can see – otherwise its a chicken and egg situation because your app has to first get enough installs and reviews before Google features it, and without Google featuring it, its hard for the app to get visibility! Would definitely like some guidance/advice on this issue.

Q: What future plans you have for Rap-a-Tic-Tac-Toe (new features, sequels)?

Will wait and see how the response is and then decide on sequels, …

Angry birds definitely comes to mind! But in general the idea of creating mobile apps sounds pretty interesting and find it fun to learn all the tricks and ways of creating different features.

Java is a pre-requisite – there are many books on Java that start from scratch and let you develop some confidence to code but I found the Android book scene pretty frustrating. There is no book that would start from scratch and have enough breadth/depth! Though all books claim that you don’t need any background, … I think there is an implicit assumption that you have done some GUI based development before (e.g., Swing). They don’t state that explicitly because otherwise they can’t sell those books! I thing reading the same thing again and again from 4-5 books got me started and the best way to proceed is to start doing something concrete and that’s when I embarked on this game idea. One resource that is definitely useful is stackoverflow.com which will most likely have an answer for any programming question that you may have.