When I was little there was a game we would play with a ball of yarn (thread for those that never saw one), where you’d start tangling the yarn over your fingers and the others had to take the “spiderweb” off your hands onto their own in a way so that no vertices remained loose. Sounds complicated but back then there were no computers around to play with (mid 80s). So that was our own brain puzzle with a ball of yarn, of course until we would all be bored with it and start throwing the balls throughout the room to create a spiderweb of yarn threads.

Well this is the memory that “Entangled Game” brought back and I’m happy it did, as I got to have a lot of fun playing a brain puzzle that involves threads and vertices. This is what the game is about, you are given a geometrical form that consists of vertices connected by threads and your goal is to move around the vertices (tap and drag) in such a manner that you will obtain another geometric form where none of the threads overlap.

Sounds simple, huh? Not quite, as I admit that after the 4th level of the first world (called part) it didn’t work anymore to simply move around the vertices to solve the puzzle. I had to develop a strategy to advance (I call it synchronized vertices movement, where basically I try to connect in my head the vertices in pairs and move each of those in opposite directions). But I doubt it will last long as the forms become more and more complicated. You can see in the image below to the left the original entangled geometric form, and the the right its transformation to pass the level: 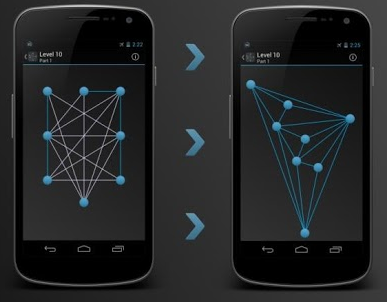 If you love brain puzzles then Entangled Game is just right for you. It will let you practice your spatial visualization skills plus train your brain to understand those and find a solution, not to mention that I had some fun of my own trying to name the geometric forms that were shaping in each level. You can watch Entangled’s gameplay in the video review below:

The thing I love most about Entangled is the fact that the developer kept it simple to its basics so that you can go ahead and enjoy playing the puzzle itself instead of being distracted by fancy graphics. The KISS principle (“Keep it simple, stupid”) at its best.

The game is developed by Jan Rychtář and is one of the 3 games he released so far, to install it either visit his website, http://www.janrychtar.cz/, or go directly to Google Play to download it: Entangled Game