One of the most popular questions I receive from developers is “When should I publish my app on Google Play?”. My answer for most non-premium apps is: YESTERDAY! You should submit your app to Google Play and have it published as soon as you have a working copy (following a private BETA) with the following slogan in mind: Release Often, Release Early. “Release Often, Release Early”Premium apps can plan to publish an app whenever they consider the highest interest for that type of app is the highest (i.e. right before a holiday for themed games, generally in the fall, …), but non-premium apps should be released as soon as they are ready.

From a reviewer’s point-of-view I classify apps/games in two categories: premium and non-premium:

This is the other frequent question I’m being asked. There are lots of articles focusing on the urgency of submitting app review requests right before releasing an app, with a news embargo not to publish about it sooner. This is an excellent strategy, however only for premium apps. The idea is that if an app gets lots of downloads in the first hours/days from its release, it might get into a top in the appstore and reach PR heaven. But for non-premium sites that’s a sure way (i.e. sending news embargo) to be ignored by app review sites. Why? Well, let’s consider the IFs involved here:

And actually the ifs can continue (if the app installs without errors, if the reviewer actually likes it, …) but you get the point, there’s a low probability of being covered in the first place. Email delivery rates are around 95+%, open rates are around 20%, click-through rates are at 3% and action conversion rates depend on the type of landing page. So if you contact app review sites with a normal app realistically you have around 3-5% chances of getting the app reviewed. Every extra step you add will reduce the probability, so add a “news embargo” and you reduce the probability even more.

My suggestion with contacting app review sites is to do it in the day of the week when it’s the least amount of competition, after you launch your app. I ran some statistics on the app submissions I received for the past almost 4 months and with a total of 1200+ responses I’d say the results are pretty relevant. Before you look over the data, just note that the time used is GMT which is 8 hours ahead of Pacific Time.

Below is a graph that shows which days these apps were submitted on: 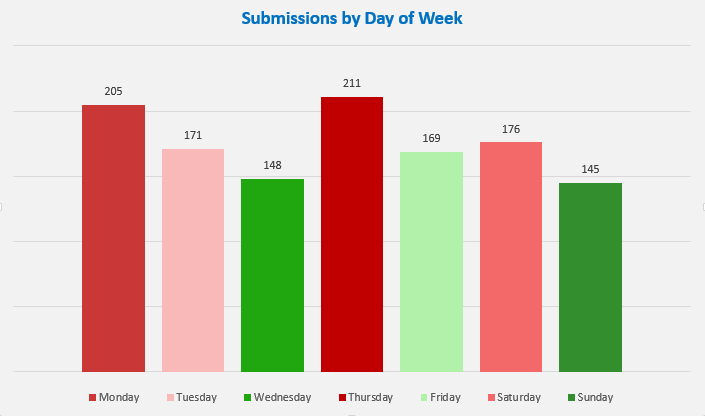 App submissions by day of the week.

As you can see, the least amount of submissions I received were on Wednesdays and Sundays. While Sunday makes sense, it’s strange to see that in the middle of the week devs didn’t submit as many apps as in the rest of the days. The general consensus is to send emails on Tuesdays and Thursdays, but my recommendation is to pick Wednesday or Sunday. Again, you’re targeting the least amount of competition, not the best open/click through rates.

The graphic below shows the time of day when app submissions were received (again, times are GMT aka Pacific time +8): 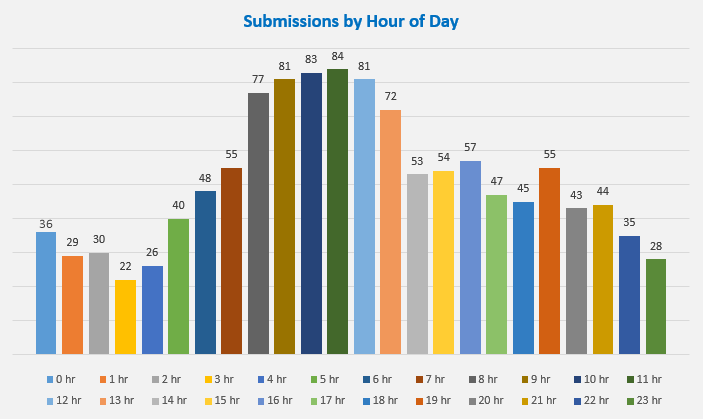 App submissions by hour of day.

All times were rounded by subtraction, so if an user submitted the app a 7:59 am, that counts as hour 7. This doesn’t affect the set of data since my recommendation is to submit your app to review sites between 2pm-6pm GMT (which means 6am – 10am Pacific time).

Merging all data you should either submit your app on Wednesday between 6 – 10 am (Pacific time) or even Sunday between those times. If you don’t use an email service and send emails manually, you have a benefit if you’re not in the US since your afternoon is their morning :).

But my recommendation is not to beat yourself too hard and stay all night up just to deliver an app review request. Do it when it’s convenient for you too, just try to avoid the “crowded” days. It’s more important having a strategy on how to contact the app review sites, than when. The strategy should be very simple, send app review requests right after your app is first released but also do a follow-up on those sites that didn’t cover your app 2 weeks later – this way you can test the best time to submit yourself.

Here are some tips for contacting app review sites that help increase the probability of having your app reviewed:

Don’t expect miracles since with more than 1.2 million apps now available in Google Play there are slim chances for you to develop the next big hit. Instead I believe on incremental value, which means not to limit yourself to a single app/game. Make a plan on what to do once your app is submitted to Google Play and after that move on to the next app, then the next app, then the next… you get the point. Income from your apps will gradually increase as you develop your portfolio, so even if you don’t create the next Flappy Bird you’ll at least have sustainable revenue.

To make (most) developers that submit an app review request smile I also ask a question on the submission form: Do you like Justin Bieber? I know, I know, the response is obvious as you can see in the graphic below: 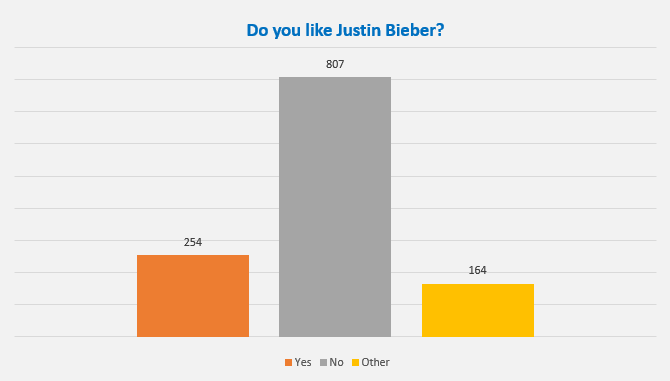 The “Others” category is actually devs that didn’t resume to a simple yes/no answer, instead they wrote full sentences. My favorite response was “I’m from Japan so who is she?”. The IP matched the country, so not a troll. He does have a vibe, doesn’t she?