Everyone knows the slot machine, if not experienced in person than for sure seen in movies. It’s that gambling device with three or more reels that spin when you pull a lever or in modern times whenever you push a button. What you don’t know is that they’re also known as “one-armed bandits”, the arm part due to the side lever, while the bandit part is due because, well, like a bandit it will leave you penniless most of the times. I’ll end my description with a few statistics gathered from here and there about slots machines:

My first encounter with a slot machine was around 1992 right after we’ve kicked the communists out and democracy settled in. I still remember the noises they made and how exciting it was to see those reels spin hoping to get 3 items in a row. It never happened and soon after an Arcade machine was brought in and that’s the one that got my lunch money for a few semesters. But as others I still enjoy playing slots, just that now I do it virtually without losing any real money. Smartphones and tablets make it very easy to play virtual slots as there are thousands of such games in the marketplace.

Jaxily, a developer with more than 16 published games so far (of which we’ve presented a few), recently released a simple game called “Black Cherry Slots” whose title says it all – it’s a virtual slot machine with cherries as the key elements to match. The video below shows a quick presentation of the game:

Simplicity is the main characteristic of the game, as you start the app and there you see the reels ready to spin. You start with 1000 coins and all you have to do is tap on the “Bet” button to start the spin. If you’re lucky enough to match 2 or 3 cherries of the same kind in the middle row, you’ll get a bonus. The lowest one is 100 points, and the highest is 9000 (for black cherries, those are the best). There are red cherries and black cherries, each with 3 and 2 variations (single cherry, double cherry and triple cherry only for the red ones). 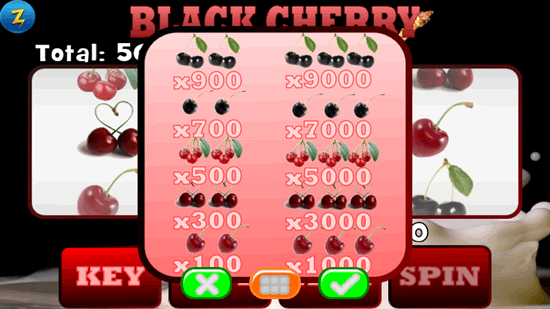 If my math doesn’t fail me there are 10 different losing combinations for the middle row (the one that’s counted for winning) and 25 winning combinations if we consider that the order in which the cherries show up is not important (and it isn’t). This means that the probability for you to win in a regular reel spin is 71.428%, so more or less close to 3 out of 4 spins will be a winning one. This is a game you play for fun that’s why the high probability for winning, if only this would be happening in real paying slots…

Here is a list of features you get when you install “Black Cherry Casino Slots”:

“Black Cherry Casino Slots” is simple enough to let you start playing right away without configuring anything. Just start it and let the reels of fortune spin, you’ll win enough times even if you’re not usually lucky, as the odds are on your side.

You can check the developer’s website at jaxily.com for more details as well as the other games developed by Jaxily, or head on to Google Play to download this one: Black Cherry Casino Slots