Algebra can be fun with Hands-on Equations

From the first year in school (7 years old) we all heard stories about the math teacher, the most feared one in the entire school. To put it into perspective, kids would rather be taught by a hybrid between Lord Voldemort and Sauron rather than take his class. Everyone would feel shivers thinking of the time when we’d all have to be his students, feeling lucky that we still had our beloved school-madam.

The first year of secondary school arrived and we started doing Math with that professor. Being that we were in a communist country, the teacher had all the power in deciding how he’ll teach his students. He would divide students into those that know Math very well and the others. Thus in the entire school he probably had 10 very skilled Math students and 100 others. His favorite method of teaching was instilling fear, either by shaming those that didn’t know to answer something in front of the entire class, shouting or simply giving them the lowest possible grade. The skilled ones weren’t treated better either, I know since I was in those few selected ones. We were actually forced to study twice as much as the others, for the ultimate purpose of participating in the Olympics.

I remember that before any Math competition we’d go to, he would gather us and in a rigorous voice he would tell us to remember that beside our own names, on the exam papers we’ll hand in we’ll write his own name. He would emphasize that he doesn’t want to be associated with junk: thus we’d better deliver. And we did, it seems fear and forced respect made a great combo. But the downside was that only years later I managed to overcome that fear and replace it with passion for Math to achieve my full potential. Unfortunately even today there are numerous teachers that think the best way to motivate students is by scaring them (i.e. bad grades, stigma).

The results? Well, in the US the national data from 2008-2009 showed that an average of 25% of ninth graders fail to finish high school, with percentages going as high as 45% (in Nevada). The main reason for failing is Math (Algebra to be more precise) and this happens all over the world. Some say that Math is overstated but they fail to see how interlinked is everything with Math. Science, technology, engineering and dozen other key elements in the future development of our world rely on Math. Students need to learn it because that’s how they develop their quantitative literacy, which is a key for problem-solving and decision-making skills.

While you might not need to use your Math knowledge to estimate the impact of climate change and cost of environmental regulation, you will have to know some basic Algebra to calculate the tip you have to leave in a restaurant (to name just one application).

Luckily there are teachers that innovate and find solutions to make learning fun as it is the case with Dr. Henry Borenson. He invented Hands-On Equations, a visual and kinesthetic whole-brain teaching method that helps students learn Algebra and increases their interest in mathematics. It is a supplementary program that can integrated with other curriculums and to date it has helped more than 1 million students. A research (PDF) by Henry Borenson and Larry W. Barber showed that students as young as grade 3 can achieve results as good as an 8th grader by using this method, as you can see in the table below:

Test results for kids before and after using Hands-On Equations

Data in this table shows clearly how well did students do after taking the lessons and using the Hands-On-Equations methodology. For the 4th graders in this experiment, if 30% of them passed a basic Algebra test before using Hands-On Equations, that number almost tripled to 89% after following 7 lessons from this program. The video below shows how the Hands-On Equations approach works in making Algebra fun for students:

Here are some of the benefits that students get from Hands-On-Equations:

If Hands-On Equations was first released as a physical game with a well described methodology, now it has also entered the mobile world as an app for both iOS and Android devices. Its inventor, Dr. Henry Borenson, created it using his experience as an educator of over 30 years. He invented it because he felt, like many of us did too, that the traditional methods just weren’t working. Now his company, through a network of teachers/practitioners and presenters, organizes workshops throughout the country to educate other teachers on the benefits of HOE (Hands-On Equations) and making algebra fun for students.

The app is currently released as Level 1, two others to be following soon as Level 2 and Level 3 with new Algebra lessons. Hands-On Equations Level 1 has 6 lessons in total, of which 3 are included in the Lite edition (the full one being $5). It is an ideal way to introduce algebra to kids and judging by the positive comments from their appstore listing adults find it useful too. 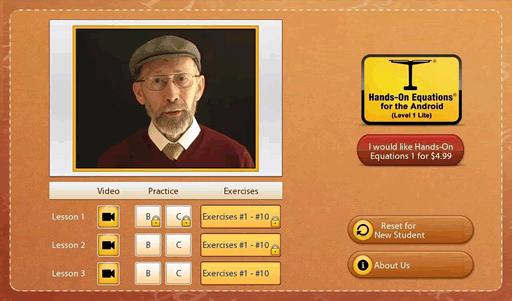 The way it works is simple, the whole logic revolves around a balanced scale that has to be always perfectly aligned: whatever is on the left has to be matched in value by what’s on the right. It is a visual representation of an equation, as that has two sides as well. To refresh your memory, “4x + 5 = 3x + 6” is an equation that can be represented and solved using Hands-On Equations. The purpose is to find the correct value of the unknown, “x”, represented in HOE by the blue pawn. So “4x” in the example above would be represented by 4 different blue pawns. The “5” would be represented by a cube showing the number 5.

Initially through trial-and-error, the apprentice would try different values for the unknown to see when the scale is balanced (lesson 1). As he progresses through the lessons, he would have to solve advanced equations that can be simplified by subtraction (lesson 3). I’m not good as a presenter as it is the app’s inventor, but if you’re used to my style here’s a video tutorial that shows how to use Hands-On Equations (this is a video presentation of the first three lessons in the app):

The combination of video tutorials and exercises that are available for each lesson make the learning process quite fast even for kids who have not previously experienced doing mathematics with understanding. As you’ve seen above there are 3 lessons available (in the free version) with 3 more in the paid version of the app:

You can’t go wrong with Hands-On Equations if you want to learn Algebra the fun way. Right now for Android mobile devices only these 6 lessons are available but more will be added. (All three levels of Hands-On Equations are already available for the iPad.) If you’re keen to learn more though, you can always check their web site to see when a workshop will take place near you. You can also visit their website, www.borenson.com. From there you can purchase the entire HOE system (including the kit with the balance scale), instructional DVDs, ebooks and even reward your kids with an HOE branded T-Shirt – international orders are allowed.

With the digital version students get a glimpse of a digital teacher as well, given how feedback is provided in the check phase of the equation. After entering the value of the unknown there’s an ‘Auto Check’ feature that will calculate how much is on the left side versus how much on the right side thus allowing them to realize if something is wrong. 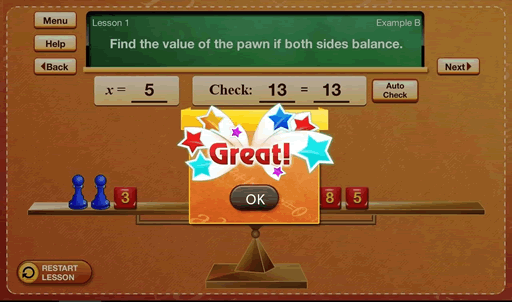 At the end of the exercise you get feedback on how well you did.

The controls of the app are trivial in the sense that you only tap and move pieces to and from the scale, thus keeping you focused on the equation rather than in-app moves.

You can purchase the full version of the app here: Hands-On Equations (Full version).
Optionally, if you just want to get a feeling first on how the app works, you can get the free version here: Hands-On Equations Lite.
Lastly, check their main website at http://www.borenson.com/ for more details regarding this learning system and look for announcements of new lessons or products.