I believe I was in my 4th grade when I first read Bram Stoker’s classic Dracula. To my surprise Dracula was from Romania, my own country, and I had a mixed feeling between fear and proud. It was soon after that I learned in history lessons about Vlad Tepes, one of the Romanian rulers from the 15th century. He was nicknamed ‘Vlad Dracul’ and was considered a very cruel yet just leader. In Romanian ‘Dracul’ actually means Devil, however back then it was actually referring to ‘Dragon’ (as in son of dragon).

He is still considered a hero as he was able to fight against the Ottoman invasion and the local corruption, his favorite method of ‘punishing’ being death through impalement. It is believed that he ordered as many as 80,000 executions and there’s even a woodcut representation from 1500 where he is showing having dinner surrounded by impaled corpses. Add to that a photo of how he looked and you get why the whole analogy of him being a vampire started. 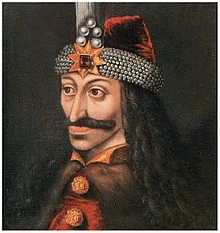 Portrait of Vlad Tepes (via Wikipedia)

I even suspect that the now famous scene from the movie ‘300’, where the lead actor says ‘This is Sparta’ and pushes his enemies in a pit, has its origins in the way that Vlad Tepes was killing his captured enemies. He was a powerful man and he probably laughed in his grave when he saw what Twilight did to the myth of vampires. Joke aside, he’s my favorite ‘vampire’ and that’s one of the reasons that I like the new game I was given the chance to look at, ‘Vampire Run’.

‘Vampire Run’ is a free infinite runner game for Android (and iOS) developed by Cinder Games, an UK-based company founded in 2012. This is their first public release and from concept art to gameplay it looks a very promising one. Nikki, the name of the main vampire, wakes up from his 1000 year sleep to find out that he and his family are running out of blood reserves. So you have to help him kill civilians and collect their blood (in a fun, cartoon-like manner, not cruel) with the purpose of running as far as possible while collecting blood tokens. ‘Vampire Run’ is easy to play as you can see in the video presentation below (where you can also ‘enjoy’ my Dracula-sounding voice):

You control the vampire with a simple tap and you only run in a single direction, forward. Here’s how you play Vampire Run:

‘Vampire Run’ is a game for all ages, neither boring for adults nor too difficult or bloody for children. If you’ve played ‘Temple Run’ before and enjoyed it, you’ll like this game too. It’s not available only for Android, as they’ve developed a version for iOS too, so you can play it on your iPhone as well.

The credits section of the app show no less than 9 people that have worked on it, thus a thoroughly developed game. As with other games from its niche (i.e. infinite running), you have various options you can fiddle with:

You can go ahead and download the game directly from Google Play: Download Vampire Run.
The .apk has about 43Mb (mainly because of the custom artwork) but that’s not a problem for a decent device. If you have an iOS one, you can visit their main website at http://www.cinderuk.com/ to get the link for it.

Interview with the developer

Q: Can you share some information about your company with our readers?

A: Cinder Games is a small UK based games studio which was set up last year by myself, James, and my business partner, Jamie. Our team is constantly changing as we use freelancers for most of our artwork and sound, however all of the design, production and code is done in house.

Q: How did you come with the idea to create Vampire Run, what inspired you?

A: The world currently seems to love vampires in tv, films, books etc.. and we thought there aren’t enough good vampire games out there! This coupled with the popularity of endless runners in the mobile gaming world made Vampire Run the perfect choice.

A: This was our first game as a company and therefore it took a bit longer to create than initially planned, but including the unforeseen roadblocks it took about 5 months to complete the build, working seven days a week. However we have worked on a few other projects at the same time.

Q: Are you currently working on other games, anything you’d want to share with our readers?

A: We are about to start the development of two new games, they will be puzzle-based but that’s all I can say for now!

Q: What future plans you have for Vampire Run (new features, …)?

A: Thanks for player feedback we’ve realised that we need to expand upon the playable level with some more exciting streets and shops to explore. You may have noticed that in the power-ups page there are four “Coming Soon” spots, we would also like to introduce these as soon as possible to make the game more enjoyable to play!

Q: With hundred of thousand of games in Google Play/Appstore, how do you make people aware of yours?

A: This is the hardest thing of all. Primarily we are plugging away at review sites (like yours), as well as making the most of the social media outlets such Twitter and Facebook. We are also looking at user acquisition however this tends to be an expensive way of marketing, which is dangerous for a small company with a limited budget.

A: A few we are currently playing; Hungry Shark Evolution by FGOL, Jetpack Joyride by Halfbrick, Pudding Monsters by Zeptolab. These games are made by quality developers who are a great example of solid design and put a high level of detail into their games and artwork.

Q: Have any tips/advices for other developers that want to start working on a game? Any tools that you consider to be a must (i.e. Corona SDK)?

A: We tend to be jealous of the amazing artwork we see in the top games today, users expect to see this AAA level of quality or they can be put off downloading, so make sure you can provide this. We would also recommend prototyping your game ideas before committing fully to the project, you need to make sure the game mechanics would be appealing to players! Corona SDK is a great tool for doing just that, it’s 2D and Lua based which provides you with a platform you can make multiple prototypes per day with!