Test your basic math skills with Numerus for Android

When I was a student in my free time I was discovering the wonders of the gaming world by playing Starcraft, the beauty of sharing by joining DC hubs and all kind of fun stuff. My head wasn’t anywhere near the idea of creating something useful for others or anything that could help me financially.

I’m glad that others aren’t as me, as you’ll see in the app being presented today. Meet Francesco Stranieri, a 22 year-old student at the “University Federico II” of Naples, who has already released his fourth app. I’ve visited Naples during college (as an Erasmus student for 3 months) and I’ve seen a beautiful side of Italy, as very close to Naples is Capri, the most beautiful island I was given the opportunity to see until now, not to mention Mount Vesuvius and the ruins of Pompeii. Yet with all this surrounding beauty he got the chance of developing something for others as well.

Numerus, the app being presented today, is a small app that lets you test your basic math skills. The idea is very simple, you are presented with a basic math operation (addiction, subtraction or multiplication) and in less than 10 seconds you have to guess the result. If you win, your score increases, if you lose you get to see the monkey, literally.

When the app starts you get a screen from where you can access the Instructions, view the Online Score leaderboard and most important start a New Game. The app has a Keyboard option which I advise you to use as it will let you enter the result faster than by using your smartphone’s keyboard. You’ll get to having a title as well, but only if you’re proficient enough. 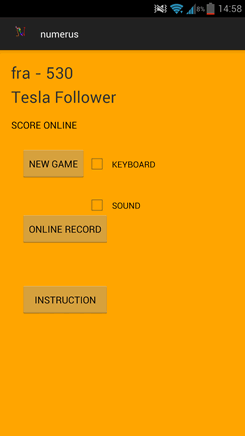 When the game actually starts you’ll see a timer running out, that also makes a siren sound when being close to 0, and the math question to which you have to provide the answer. There will be negative numbers involved as well, so that’s why the in-app keyboard is important. 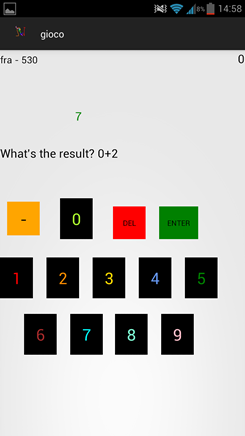 After you’ve entered the result, if it’s correct you’ll get a cheering sound and your score will increase, if it’s not correct you’ll get a second chance. A prompt will allow you to choose 1 of 3 possible images and behind 2 of those is one with a monkey that means game is over – however behind one of those is another chance to continue the game even if your answer was wrong.

As I mentioned a score is involved. If your answer is correct, you get the following score: 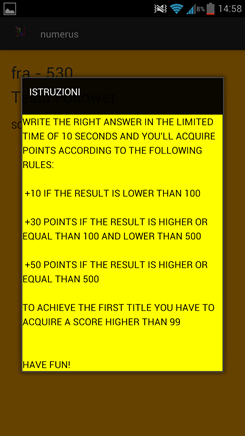 Depending on your score you will receive a specific title, as long as your score is over 99. I got a title of “Tesla Follower” by scoring 590, not sure what other titles are available but I bet “Genius” is one of those. Some of the computations are easy, as they’re plain additions or subtractions, but the multiplication part is the most difficult one. Try multiplying 17*34 in your head in less than 10 seconds and you’ll get my point.

The app is still in its infancy, as there are many improvements that can be done, but what convinced me to try it and mention Numerus is the fact that it was developed in only three days. That’s very impressive if you ask me, so when you try the app yourself take that ijto consideration. I wish to see in future releases the possibility to control the math operation types, for instance to increase difficulty or reduce it, to add other operations such as division, power, log (…), and I’m sure it will get improved in that direction.
You can download Numerus directly from Google Play via the following url: Numerus

I know this information regarding the app development time as its “creator”, Francesco, shared some information in a short interview as you can read below:

A: I was inspired by people who make fast operations with numbers in their heads, I wanted to create, with a simple idea, a “prove-you’re-smart” game based on how we can make calculations in our brain.

A: 3 days. After the first public release I’ve added some features like the integrated keyboard.

A: Yes, 4 apps, all for ANDROID, 2 of them to help other students. I’m studying Android development by myself since 1 year ago and I develop apps in the free time.

A: It’s a free app and targets people that want to test their math skills. The more enjoy it, the faster it gets popular.

A: I hope people who try it let me know what I have to do to make this app better. I want to learn and new ideas are what I want.

A: Not many, I think that only the passion for the Android development is inspiring me.

A: I think that other developers have tips for me, I’m a novice in Android development.